Last week in this space I discussed Helstrom. The week before I focused on Star Trek: Prodigy, M.O.D.O.K., Invincible and several other upcoming TV shows, all discussed at New York Comic-Co.

SHADOW OF THE BAT

It’s been a minute since The CW announced that Ruby Rose was leaving Batwoman after one season, to be replaced by Javicia Leslie as an entirely new character wearing the suit. And now the suit itself is changing, according to The CW.

Not by a lot, in that basic black with red highlights is going to look pretty much the same from a distance, no matter what incidentals are changed. The major difference is the wig, which was long and straight on Rose’s outfit but will be full and curly on Leslie. It’s sort of Afro-ish, which is appropriate, given that Leslie is African American. 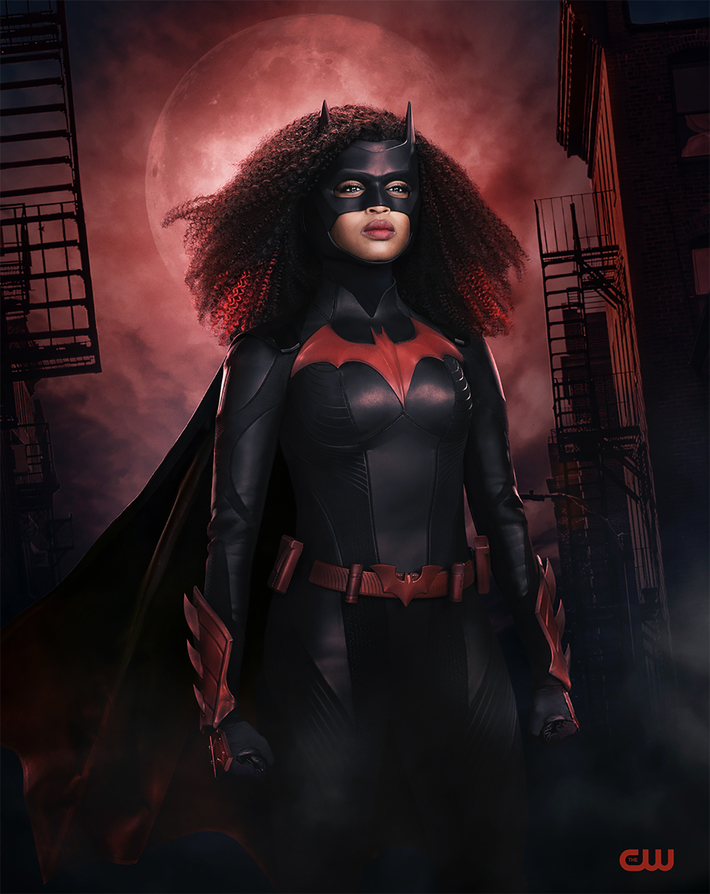 I suppose that will give some folks a fit. But I’m a comics fan, so it doesn’t  bother me a bit. The only thing I worry about is if the new character, Ryan Wilder, is introduced in a plausible way.

And the show is already in a hole when it comes to that. I mean, when Rose’s Kate Kane was introduced, the explanation for the lack of a Batman was that he was "missing." That goes down the wrong way for Batman fans, because the only way Bruce Wayne would abandon Gotham is if he were dead. So either Batman’s dead (bad) or he’s acting out of character (worse). It doesn’t help that this is the same excuse used on the Birds of Prey TV show back in 2002 — and it stunk up the place then.

But, OK, if I can muster enough suspension of disbelief to accept that someone can swing around buildings on a rope without yanking their arms out of their sockets, sure, I can compartmentalize the entirely unconvincing “Batman is missing” bit long enough to enjoy the show. Except now we have to somehow accept that Batwoman has also bailed.

How will they explain Kate Kane leaving the show? Will they kill her? Will she go missing with Batman? Is there any plausible way she can pass the mantle?

Further, Kane is family (she’s Bruce’s first cousin) and the new character, Ryan Wilder, is not. How can they give her the suit without Luke Fox’s head exploding?

These are the questions that keep comics fans awake at night. The Arrowverse usually manages to paper over production problems within the story. But this is a big one.

On the good news front, Leslie is more physically robust than the petite Rose, and is therefore a more convincing action hero. Plus, she looks great in the suit.

THE FIST OF KHONSHU

For those who don’t know (and shame on you), Moon Knight is Marc Spector, a former Marine and mercenary whose life was saved by the Egyptian moon god Khonshu, with the promise to be the deity’s avatar on Earth. Spector was granted mild super-powers in the form of enhanced strength, speed and durability, which wax and wane with the moon.

As a bonus, Spector also suffers from dissociative identity disorder, meaning you get multiple characters for the price of one. In addition to Moon Knight, Spector’s other personalities include cabbie Jake Lockley and millionaire Steven Grant. The latter finances Moon Knight’s crusade, like a bonkers Bruce Wayne.

If Oscar signs on the dotted line, he’s another A-lister to feather Marvel’s cap, and welcome news to fans. We already know how well Isaac can handle genre fare, given his portrayal of Poe Dameron in the latest Star Wars trilogy and the titular villain in X-Men: Apocalypse, plus roles in Annihilation and Ex Machina. He also stars in Dune, currently scheduled for an Oct. 1, 2021, release.

Behind the scenes, Jeremy Slater is developing the show and heading the writing team. That’s also good news, as he did much the same for “Umbrella Academy.” If you’re reading this column you probably know how well that turned out.

Given the critical drubbing Ryan Reynolds’ Green Lantern received, one might think the property radioactive. One would be wrong.

HBO Max has placed an order for 10, one-hour episodes of Green Lantern the TV series. It’s expected to be a deluxe production like Watchmen, which means it might have a bigger budget than the movie!

It’s also got a murderer’s row of creators. Seth Grahame-Smith, who wrote Abraham Lincoln: Vampire Hunter (novel) and the LEGO Batman Movie (screenplay), is the showrunner. The Arrowverse’s Greg Berlanti is a producer, and co-writer of the first episode.

But Hal Jordan (the Ryan Reynolds Green Lantern) may be considered damaged goods, because he won’t be on the show. Nor will the two next-best-known Lanterns, John Stewart and Kyle Rayner. Instead the show will feature:

I’m not a big Gardner fan — there’s a fine line between being aggressive and being a bully, and not all writers find it — but Baz and Cruz are very welcome. And Scott should be fascinating, and not just because he’s gay. 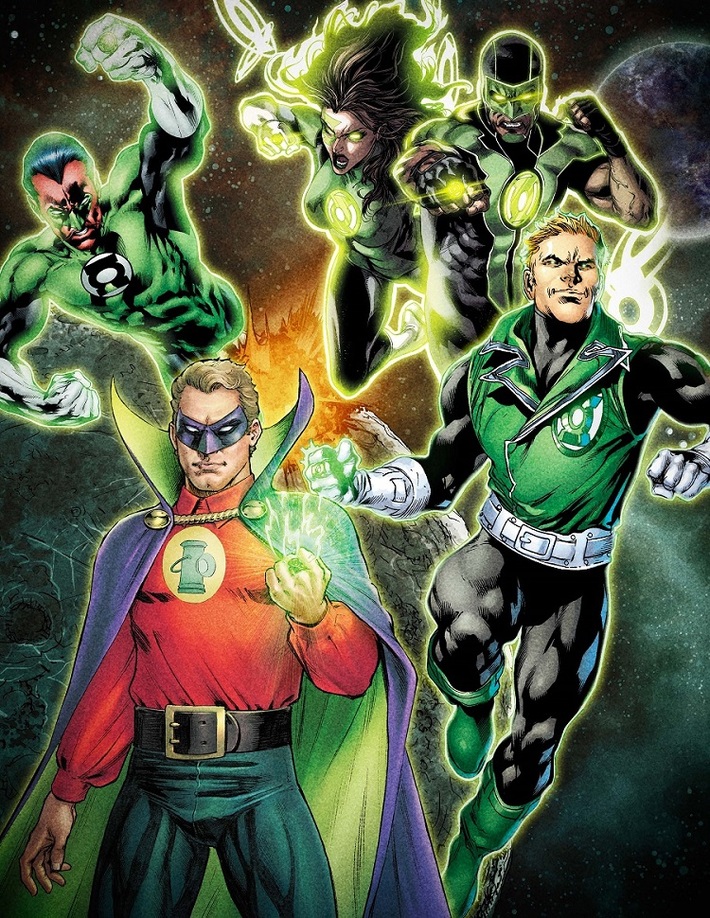 Well, partly that. It’s only recently that DC wrote a new version of the character as gay, which has been extended to the original going back to his 1940 introduction. It actually works without too much squinting; the character had virtually no private life on the pages of his 1940s adventures, and the closest he had to a girlfriend was Harlequin (no, not that one), a woman named Molly Mayne who committed crimes with clown gimmicks to attract Green Lantern’s (romantic) attention. Which, no surprise, didn’t work.

So, sure, it makes sense he’s gay. And all the more interesting, given how he had to stay in the closet through one of the most macho periods in American history. His oblique comments in current comics still reflect his almost reflexive sense of privacy.

But aside from that, what gives comics fans the tingles is that Scott isn’t connected to the other Green Lanterns. Hal Jordan and his ilk get their super-scientific rings from the Guardians of Oa, but Scott’s ring is magic, carved from a talking meteor. So how they plan to connect Scott to the other Lanterns has comics fans on tenterhooks.

Yes, we are weird.

What could possibly induce megastar Samuel L. Jackson to star in a small-screen production? How about a Nick Fury series?

The recent announcement by Variety had few details, so there’s no telling what Nick Fury (if it’s called that) will be about. That gives us the opportunity to crank up the Speculat-O-Tron!

Will it continue the story from the teaser scene in Spider-Man: Far From Home, with Fury in space? (Most observers think he’s building the space station from S.W.O.R.D., the Sentient World Observation and Response Department, which in the comics guards Earth from invasion.)

Will it include the now unemployed Agents of S.H.I.E.L.D.? (Chloe Bennet’s Daisy Johnson would be most welcome.)

Will it have Big Name guest stars? Maybe, since Jackson has always been the vital linchpin in the Marvel Cinematic Universe, appearing in 11 Marvel movies (so far) and two episodes of S.H.I.E.L.D.

Given that Fury left S.H.I.E.L.D. in Captain America:  The Winter Soldier, we can’t even assume the catchphrase above is in play. Maybe we need a new one? Like “Don’t Be Bored, Join Our S.W.O.R.D.”! Or “Spicy Like Curry, It’s Nick Fury!’

Until Joker, it was difficult for me to imagine a comic book-based movie or TV show as good as the original (and I have seen a lot of them). The only thing on this list which interests me even slightly is Batwoman.

Permalink Reply by JohnD on November 8, 2020 at 7:19pm
The whole missing Batman thing is indeed troubling; but, I see it as way to eventually allow the charactor to return to tv. When I think of conic stories I've read that take place over long periods of time, but are condensed into several issues tha take maybe half an hour to read, it's not inconceivable the The Bat is off on some complcated world threating mission which would certainly imperil Gotham, causing his abscence.

I was thinking what might work is if it is later explained that Bruce is deep undercover, and therefore theoretically already on the show (some guy who has been named but never appeared) and, more importantly, still protecting Gotham (in some manner). It's not a perfect solution, but better than "Batman's dead" or "Batman's on vacation" or "Batman, the world's greatest escape artist, is captured somewhere and can't escape."

Maybe it could be greased a bit with the comics/TV trope that he's hit his head and has amnesia. Then he'll get it back when he's hit in the head a second time!

The thought occurs to me the Batman could be imprisoned somewhere.

I can't believe that Batman could be imprisoned anywhere for what amounts to years. That's really off-brand!

Also, since I'm here, I'll update the Nick Fury show. It's not gonna be called Nick Fury. It's gonna be Secret Invasion!

I am looking forward to seeing "What If?" and "invincible" shows that are appearing online. I have always enjoyed reading Marvel comics' "What If" series and now as an animated series?! Cool