Happy! is the name of a new comedy-drama arriving Dec. 6 on Syfy. Trying to describe it, though, is not always a happy thing.

Happy! is based on a graphic novel by two comics legends, writer Grant Morrison (The Invisibles, Multiversity) and artist Darick Robertson (The Boys, Transmetropolitan). It is the blackest of black comedies, humor so dark that to simply describe it is to fall into a dirty sack at the bottom of a coal mine in the belly of giant earthworm. At midnight. Which is pretty dark.

The “hero” of the tale is Nicholas Sax, a former New York police detective, who is now a drunken, drug-addled hit man whose face is covered in eczema. At the beginning of the story we see a perverted, drunken Santa Claus; a man dressed as a prawn (or possibly a cockroach) engaged in naughtiness with a prostitute dressed as an angel; and four men brutally murdered, with two of them tied up in Christmas lights.

Did I mention this story takes place at Christmas? Ho, ho, ho. Fortunately, for the sake of our lunches, not all of that translates directly to the Syfy series.
As Syfy describes him, Sax is “an intoxicated, corrupt ex-cop turned hit man – who is adrift in a world of casual murder, soulless sex and betrayal.”

See? The TV Sax, played by Christopher Meloni (Law & Order: Special Victims Unit), doesn’t seem to have the fungal skin infection. Otherwise, though, not much seems lost in translation from the graphic novel.

So does the TV show. Don’t be concerned that you might be suffering from some bleak, existential breakdown, though. That feeling is on purpose.

At the show’s New York Comic-Con panel, executive producer Brian Taylor said, “The first note we got from Syfy said, ‘Don't hold back, don't edit yourselves, go for it. We don't want you to do something safe. We want dangerous TV. We want something on the edge.’”

And there is a ray of light. Albeit an unusual ray. In fact, it’s not light at all. It’s a flying, blue unicorn, that may or may not be imaginary.

Because when Sax has a heart attack in the comics, the first thing he sees when he wakes up is the abovementioned unicorn. A small unicorn, to be sure, one about the size of a Jack Russell terrier. With little feathery wings. And he is quite blue, and quite cheerful. He is, in fact, the character on which the title is based.

“It’s me, Nick!” he announces. “Happy the Horse! And I’m your new partner, partner!”

Why Happy thinks he is a horse, despite the horn on his forehead, is unexplained. But Happy is delighted that Nick can see him, because nobody else can. Well, except Hailey. Hailey is the little girl who made Happy up, a little girl who has been kidnapped by a very bad man who plans to do something very bad to her.

It is Happy’s constant harping that keeps Sax – and occasionally the reader – from completely tumbling into despair. “I’m hope!” he yells at one point. “All singing, all dancing – hope!” At another crisis, he urges his reluctant charge with the words, “How about turning this into the heartwarming tale of redemption it’s supposed to be?”

Since nobody else can see Happy, everyone naturally assumes Nick has a brain injury, is stoned to the gills or has simply gone ‘round the bend due to his heinous lifestyle and revolting circumstances. 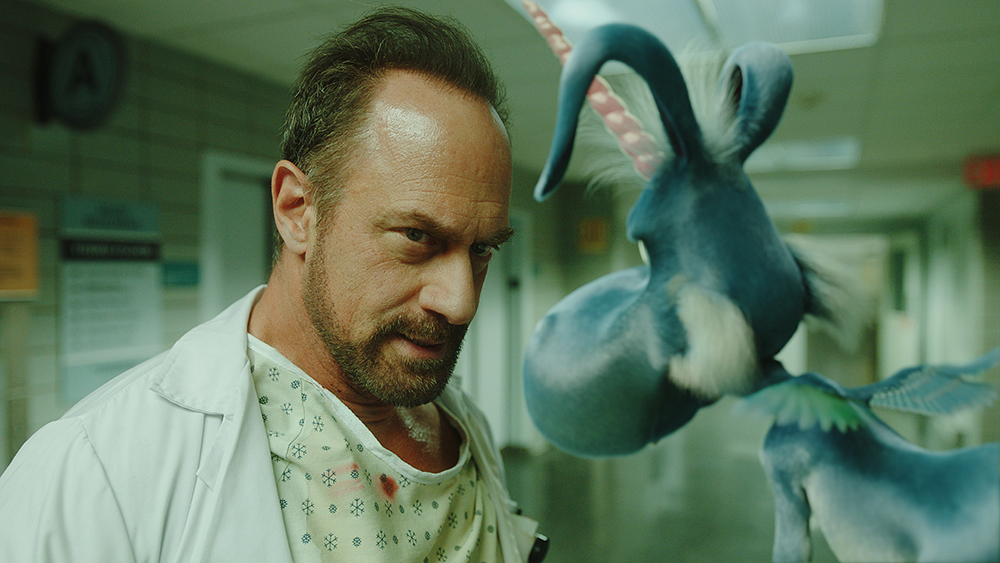 Nick Sax (Chris Meloni, left) is confronted by Happy the Horse (who is actually a unicorn).

Which may be true. Is Happy really there? That’s for you to decide, as Happy gradually wears our hero down and coerces him into searching for Hailey. (But probably.)

“So, that’s our basic high concept,” said Morrison, who is also an executive producer on the TV show, to Entertainment Weekly. “It’s about the most cynical man on earth being teamed up with a ridiculously upbeat, optimistic little cartoon creature.”

Which is not the only plot in the graphic novel. It turns out that one of the men Sax kills is a mob enforcer who is the only man alive who has the password to a computer file granting access to a mafia don’s fortune. So Mr. Blue, the head of the New York mob, is very keen to get Nick to tell him this password. He enlists a variety of unsavory characters to achieve this goal:

* There’s Mr. Smoothie, the sadist. “My team and I specialize in torture with a New Age slant,” he says. “Torture that guarantees powerful results.” He listens to Roger Payne’s Songs of the Humpback Whale as he works.

* There’s Sax’s former partner, Det. Maireadh McCarthy. Not only is she on the take from Mr. Blue, but she’s much of the reason his life went to pot.

* There are numerous mob enforcers. And dirty priests. And, oh yeah, bad Santa. All of these colorful, albeit disgusting, characters make life interesting for Sax as he uses Happy to win a high-stakes poker game, try to leave town, but eventually begin the search for Hailey – who, Happy informs him, will be killed at midnight Christmas Eve. Tick tock, tick tock.

That’s the graphic novel. No doubt many details will change for TV, and not just the eczema.

Meloni is perfect for this role. If nothing else, it’s a funhouse-mirror reflection of his character on SVU. And he’s a great counterpoint to Happy, who is voiced by the inimitable Patton Oswalt.

Another likely change for TV is the dialogue. There’s so much cussing in Happy! the graphic novel that it’s difficult to find printable quotes. But there’s something a little off about them – Morrison is from Glasgow, and there’s a distinctly Gaelic flavor to the more colorful insults.  Happy! the TV show will probably have profanity of a more All-American nature.

So will Happy! make you happy? Well, partner, if a small blue unicorn doesn’t do it, I don’t know what will.

Well, now.  THAT was a whole lotta stuff I didn't expect to see/hear on basic cable,

I saw the first episode, and...it's fine. I think I'm just beyond shock at this point, and I'm not sure what else this is bringing to the table. I'll probably give it another episode, especially since I like Patton Oswalt so much. But pretty much everything other than Happy himself feels so derivative, even as its pushing boundaries on TV. (The comic felt that way to me too, so this isn't really a surprise.)

I agree about the comic: I thought it was Morrison trying too hard to be Garth Ennis. But I think the first episode was an absolute hoot. Both Meloni and Oswalt were perfect in their roles. It's worth watching just to see them interact.

I remember reading Happy! a few years back and thinking "What was the point of that?"

Also, there's a character with what looks like a Welsh name in the GN that's changed to the more American "Meredith" for TV. Plus, the cussing is, as I predicted, more American in the TV show too. In the GN, the cursing had a definite Gaelic character, both in terminology and rhythm. Both of those things were off-putting, because they took me out of the story and reminded me it was being written by someone not native to this country. People in this country don't use words like wanker and don't name their kids Mdghdhdghdgh or whatever.

Permalink Reply by Doctor Hmmm? on December 12, 2017 at 12:51pm
Unless they're from Innsmouth, Massachusetts I suppose.
Meloni is pure gold in this. He looks like he (not his character) is having a ball.

Well, despite my initial misgivings, I watched the first season all the way through, and am on board for this one, too. This seems to be the rare comic book show that Kathy's more into than I am. The humor still seems a little broad and obvious to me (which, in fairness, is the only way cartoon-fairyhorse humor works at all), and I'm still not crazy about all the sexualized violence and torture. (Not a prude; it just feels kind of rote to me.) And yet the OTHER violence is pretty wonderful -- the fight scene on the slippery pool of blood on the season 2 opener was pretty delightful, and the shot with the crane slowly rising and hanging the guy was a treat.

I really enjoyed the first season, so I'm certainly looking forward to this one. The thing is so crazy that it's kind of amazing that there is a second season at all!

The lead character died at the end of the book, which was essentially the first season. So they're in uncharted territory.

I saw the first episode last night, and it's just as nutso as ever. And evidently all the first-season characters are due for a return, including minor ones like the poker-playing cowboy. This is fun.