Obviously I am falling behind.

Yesterday I watched the Bela Lugosi movie Invisible Ghost after Jeff called it to our attention. It is very well done. All of the actors performed well. The butler, as Jeff said, was treated with respect by everyone. He was giving instructions to the other employees and was treated with respect by his boss, also. Whenever he wanted to dodge a question he would change the subject. It cracked me up when one of the cops asked him where he was when one of the murders happened, he offered the cop coffee, which was enthusiastically accepted.

They had intended to copyright the film but forgot, so it’s in the public domain. Because everybody and his brother have duplicated DVDs and videotapes, most copies aren’t great. I’d be willing to bet that the one I watched on Amazon Prime was the cleanest version.

While I was on Amazon Prime for the Bela Lugosi movie, I decided to watch another movie that I had rented from them: Body Snatchers (1993). Jeff had called our attention to the three sequels to Invasion of the Body Snatchers (1956)*. I had only seen the 1956 and 1978 versions, which I own on DVD.

*Fun fact: Richard Deacon, who went on to play Mel Cooley on The Dick Van Dyke Show, appears as a doctor in the framing sequence of the 1956 version. I had just watched him play a nefarious doctor in Abbott and Costello Meet the Mummy.

Down by Law - a black and white movie from the mid-80s by Jim Jarmusch. Tom Waits and John Lurie are both framed for crimes and thrown in jail in Louisiana. They are soon joined by Roberto Benigni, an Italian tourist who has been jailed for manslaughter. The trio eventually make their escape and proceed to get lost in the swamp. Further adventure ensues. I liked this better than I thought I would, kind of a quiet little film

Reminiscence - This is Hugh Jackman's new flick. A sci-fi neo-noir I think you would call it. Hugh Jackman runs a company which allows people to re-live their favorite memories. Or in other cases allow people to find what they have lost. One such client catches Hugh Jackman's heart and this disappears. He tries to find her, as well a reliving all of his experiences with her. This gets into some class warfare intrigue of some such.

Honestly, I thought it was pretty damn boring, and couldn't wait for it to be over.

The Final Countdown - a modern day aircraft carrier patrolling the Pacific enters a time vortex and is transported to Pearl Harbor one day before the Japanese attack. There is no dithering about affecting the time line as the ships captain decides he is duty bound to utilize all the fire power at his command to make a preemptive strike against the Japanese fleet.

I was reminded of the Star Trek episode "Tomorrow Is Yesterday" as the ship rescues a man and woman whose yacht has been sunk by Japanese Zeros. The crew unsuccessfully tries to hide the fact that they are from the future. The surprise ending was a bit predictable but a fun movie overall.

Richard, I am pleased you enjoyed Invisible Ghost as much as I did. I still need to check into the availability of those four "body snatcher" movies (meaning have Tracy do it for me), but our "to watch" pile is really growing. Last night we watched not one of "my" movies and not one of "Tracy's," but one of Bob's.

DONOVAN'S BRAIN: This 1953 movie was based on a book, but it's very much the movie equivalent of this story: It stars Nancy Davis, and I only wish her co-star had been her future husband (although her actual co-star previously made a movie with her future husband's first wife). John Hamilton also has a small role, and when he came on screen, both Tracy and I shouted, "Perry White!" You'll have to ask Tracy or Bob why he recommended this movie to her specifically.

A quote from IMDB:

"Writer Curt Siodmak was also set to direct, but at the last minute he was replaced by Felix E. Feist." (didn't he fight the Justice League?)

Curt Siodmak was a prolific science fiction writer and screenwriter. I've read a couple of his novels.

He was actually a screenwriter in pre-WWII Germany before getting out.

He created The Wolf Man for Universal.

She told me she'd never seen it, and I thought it would be interesting to  see her and your reaction to it.  Plus you get a chance to see what Nancy's acting chops were like, if, like me, you've never seen Hellcats of the Navy, which you might've, for aught I know.

I hadn't watched it in a while, and when I saw the bit at the start with the monkey, I was like, "Oh, Christ Almighty, if there's vivisection in this, Tracy will shoot me!"
Also, I like how, at the end, Nancy's character is all, "Surely they'll let you off for your illegal, unholy experiments!"
I don't recall seeing Ayres before, but I thought he did a good job of playing a guy whose personality was being subsumed into someone else/'s.
I remember hearing a radio play of this troy when I was a kid

Richard, I am pleased you enjoyed Invisible Ghost as much as I did. I still need to check into the availability of those four "body snatcher" movies (meaning have Tracy do it for me), but our "to watch" pile is really growing. Last night we watched not one of "my" movies and not one of "Tracy's," but one of Bob's.

DONOVAN'S BRAIN: This 1953 movie was based on a book, but it's very much the movie equivalent of this story:

It stars Nancy Davis, and I only wish her co-star had been her future husband (although her actual co-star previously made a movie with her future husband's first wife). John Hamilton also has a small role, and when he came on screen, both Tracy and I shouted, "Perry White!" You'll have to ask Tracy or Bob why he recommended this movie to her specifically.

It was a fun movie to watch! The doctor is definitely not going to walk.

I watched Smart Money (1931). There are a few interesting things about this movie. Edward G. Robinson plays a barber whose main occupation is running illegal gambling tables. When he signed on for this movie he didn't want it to be very violent, following his movie Little Caesar. His assistant and friend is played by James Cagney and this is the only movie in which they both appeared. By the time Smart Money was ready to be released, Cagney had become a hot property following his breakout performance in The Public Enemy (also 1931). Because of his new stardom, the movie poster was redone to feature both Robinson's and Cagney's names and pictures. Last but not least, Boris Karloff has a small part as an ornery gambler. This is just before he hit the big time in Frankenstein (yes, also1931). 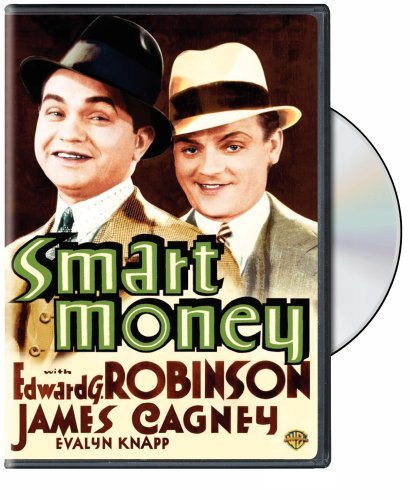 I saw Shang-Chi and the Legend of the Ten Rings* and have some thoughts, but first let me throw up one of these:

* Couldn't find a thread for it, and didn't want to start one; it seems we've fallen off the habit of doing distinct threads for the big superhero movies.