THE BEST YEARS OF OUR LIVES: I have been watching so many crap movies lately I had almost forgotten that some movies are actually good. 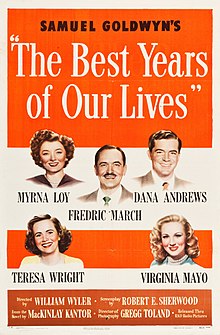 That is a very good movie!

ALL THE KIND STRANGERS: "A family of seven children are living without parents in a swampy backwoods area all by themselves. some of the children get the idea that it would be good to have parents or guardians to look over them, so they take in two strangers and make them the parents they so desperately want. The couple finds that getting away from these children will be more difficult than they imagined."

This was originally a 1974 TV movie. Now that This Is Us is off the air I'm looking for another family-oriented drama to take its place, and I think All the Kind Strangers could be adapted into a TV series very easily. After the initial setup, every episode could deal with the "parents" trying to escape. It could be like The Prisoner. The movie stars Stacy Keach and Robbie Benson.

WOMAN OF THE YEAR: While flipping through TCM last week, Tracy noticed this Spencer Tracy/Kathern Hepburn teaming and insisted we record it. I must admit, before marrying Tracy, the only Tracy/Hepburn movie I had seen was Guess Who's Coming to Dinner? (which was, I think, their last together). Woman of the Year was a bit surprising in that it did not follow the formula I had expected: an abrasive couple meets and eventually falls in love. In this one, the "abrasion" lasts only a couple of minutes (film time) and they are in love from the start. they get married about half way through, then things gets worse. (By the end it kind of devolves into slapstick, which i would have expected early on.) Tracy and I disagree on what the turning point was (or rather, its significance). Actually, there are two, close together. The conclusion is open-ended.

I'm not that I understand what you're saying here.  Are you saying that they should stop making movies?

That's quite a mood, friend.

GUESS WHO'S COMING TO DINNER: Inspired by Woman of the Year, Tracy and I decided to follow up with Guess Who's Coming to Dinner (first time for Tracy, first time in forty years for me). I had completely forgotten Isabelle was in it; she has a minor role, but she's funny. It's a delightful film, humorous but uncomfortable... for pretty much everyone involved. I'd recommend it to anyone who hasn't seen it.

Over the last few years, I've seen all of the Tracy/Hepburn collaborations. They are always fun to watch and not particularly formulaic. Even separately they were always good, though Hepburn wasn't given good roles until later.

If you haven't seen it (or even if you have), I highly recommend The Lion in Winter (1968) starring Peter O'Toole as Henry II of England, Katharine Hepburn as Eleanor of Aquitaine (his wife and enemy), a young Anthony Hopkins as Richard (not yet the Lion Heart), Nigel Terry (who went on to play King Arthur in Excalibur) as a young future-King John, and versatile character actor John Castle as Geoffrey, the third son. My Three Sons it ain't. Oh, and Timothy Dalton as Philip II of France. Who is treacherous? Everybody!

We've been watching The Boys and finally catching up with Station Eleven, so not many movies:

My Week with Marilyn (2011): well-acted, well-cast, well-made film about the behind-the-scenes drama during the making of The Prince and the Showgirl. It's watchable but, for all the talent behind it, somewhat flat.

“Linda’s Film on Menstruation” (1974): We looked up the excellent and unusual-looking Jonathan Banks (of Breaking Bad and Better Call Saul fame) and discovered this was his film debut, so we looked it up out of morbid curiosity. An odd but progressive (for the time), choppily edited educational film that is weirdly entertaining. My wife said it was significantly better and more informative than anything she was shown in school in the 70s. Banks plays the protagonist's boyfriend.

THE DAY THE SKY EXPLODED (Italian, 1958): "A space mission goes awry when the experimental rocket malfunctions, forcing the astronaut to eject in an escape capsule and sending the rocket into deep space, where it explodes. The explosion causes a group of asteroids to veer from orbit around the sun, setting them on a collision course with Earth. With the impending doom approaching the planet, the nations of the world desperately attempt to come up with a plan to destroy the rogue planetoids."

If anyone reading this thinks The Day the Sky Exploded has anything to do with The Day the Earth Stood Still allow me to disabuse you of that notion. Wikipedia tells me this is considered to be the first Italian science fiction movie, but I strongly suspect the entire plot was built around the stock footage used at the film's climax and the story itself is nothing more than a framework leading up to it. The plot is almost entirely reactive; when a swarm of meteors is headed toward the Earth, there's not a whole lot that can be done about it. The meteors pass near the moon, so there's a lengthy section in which  the scientists simply wait and watch to see how many crash into it.

That clears out a bunch, but a whole lot are still on the way. It is determined that the only thing to be done is if every nation fires every missile at every meteor. There's also a lot of stock footage of natural disasters caused by the meteors and of people running away, but the main point of the film seems to be shot after shot after shot of every conceivable kind of missile being fired into space. The cumulative effect is almost impressive, but the footage is badly mismatched. All of Earth's animals instinctively head inland, an excuse for repurposing stock footage of of animal stampedes. There's also a half-hearted attempt at interjecting a love story or two, there's a boy, there's a dog, but the characters are largely uninteresting. Oh, and the dubbing is really bad, too. Watch at your own risk.

Travis Herrick (Modular Mod) replied to Jeff of Earth-J's discussion DC's 1st Issue Specials
"Hot damn! I thought I had reviewed a couple of these comics before, so traveling back to 2009 (!)…"
1 hour ago

Travis Herrick (Modular Mod) replied to The Baron's discussion Movies I Have Seen Lately
"I honestly, do not remember much of anything about Quantum of Solace, I do know I watched it…"
1 hour ago

Peter Wrexham replied to Steve W's discussion A Cover a Day
"According to the Grand Comics Database, the story in Adventure #276 (author thought to be Otto…"
3 hours ago

Captain Comics replied to Jeff of Earth-J's discussion DC's 1st Issue Specials
"But where did Norman Lear get it? Interestingly, one site noted that "dingbat" was used…"
3 hours ago

Captain Comics replied to Cavaliere (moderator emeritus)'s discussion What are you watching right now?
"We binge-watched Wednesday. (Eight episodes, four nights.) We even stopped The Great (we'll…"
3 hours ago

Jeff of Earth-J replied to Jeff of Earth-J's discussion DC's 1st Issue Specials
"In one episode of All in the Family, Edith explains: "Well in them days, Archie was too shy to…"
3 hours ago

The Baron replied to Steve W's discussion A Cover a Day
"I liked the Kirby version of Machine Man. Never liked what subsequent writters did to him."
4 hours ago

Jeff of Earth-J replied to Steve W's discussion A Cover a Day
"And the original..."
4 hours ago

Lee Houston, Junior replied to Steve W's discussion A Cover a Day
"Family matters kept me from posting yesterday, so here's the other Barry Windsor-Smith covers…"
4 hours ago