If you're wondering -- and of course you are -- if Captain Comics ever watched Flesh Gordon, the answer -- and of course you knew it already -- is "of course he did." And it's exactly as described above. It's a parody with boobs, and yes, Bob, you will think "this is badly written!"

Is it for all tastes?

X (2022), Ty West's deranged and frequently effective horror movie, clearly the product of someone obsessed with (a) the history of horror movies  and (b) 70s trash pop culture. In 1979, a small group, hip to the nascent straight-to-video market, head to a remote rented farmhouse to make a porn movie. Since they're in a horror movie and they've gone to a remote location, you can guess that their shooting schedule may require some reworking, and it's doubtful they will all be returning home. Nevertheless, it is well made, often thoughtful, and subverts many of the expected slasher tropes. Think The Old Dark House meets The Texas Chainsaw Massacre meets Boogie Nights meets Psycho-Biddy, at the local Grindhouse on Halloween.

I also just learned that this was remade as The Bachelor in 2007, starring Chris O'Donnell.

There are a couple of scenes in which Keaton and another character appear to be almost hit by a train. Also, at one point Keaton is hanging from (and swinging from) a moving, rotating crane. I hope his hands were securely strapped to it.

SCARLET STREET: A 1945 film noir by Fritz  Lang starring Edward G. Robinson and Joan Bennett. It was recommended to my by Rob Staeger. (Thanks, Rob!) This film was quite Hitchcockian in a lot of ways. I thought it would have a different ending. I can't say what I thought the ending would be without giving away what it is, but I can recommend this film to anyone who likes film noir. 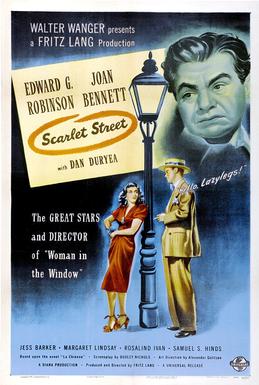 Scarlet Street impressed me so much that I made a point of buying the Blu-ray.

THE THREE STOOGES: After watching the Leonard Maltin documentary "The Lost Stooges" last week I decided to watch some of the Stooges' early movies in their entirety after all. Between 1930 and 1933 the Stooges made both features films and shorts with Ted Healy. Having seen "The Lost Stooges" before, I knew that that best bits of the films and shorts were included in the documentary, but a few of the features are pretty good in their entirety.

"The Lost Stooges" includes scenes from the features Dancing Lady, Fugitive Lovers and Hollywood Party, and that's really enough of those films for me. As far as I know, I don't think the documentary contains footage from the features Myrt and Marge or The Prizefighter and the Lady, but I may be mistaken about that. Also included in the documentary, in addition to scenes from several shorts, are scenes from the movies Soup to Nuts (1930) and Meet the Baron (1933) which I also happen to have in their entirety.

These movies and shorts are important because they give a clear indication for posterity of what their vaudeville act was like.

Now you make me want to break out Soup to Nuts again.  My impression has always been that the Stooges were better off without Ted Healy.

Of course, now I can't find my copy of it, so maybe not.

Giant Little Ones (2018): indie coming-of-age movie with some strong performances (and Kyle McLaughlin in a key supporting role as the protagonist’s dad) in an examination of identity, reputation, rumour, orientation, and toxic masculinity. The teens are played by 20-21-year-olds, so they’re passable. So is the film, especially in the second half. However, I mainly watched it because it was shot on location in my childhood home town. Of course, it was mainly filmed on those locations that could be from any town, though there was one shot of the bridge and a few taken in the park.

The Baron replied to The Baron's discussion Timeline of The Doctor's Adventures in the Order That the Doctor Experienced Them
"Updated through "City of Desth"."
24 minutes ago

Jeff of Earth-J replied to Jeff of Earth-J's discussion T.H.U.N.D.E.R. Agents
""I can’t help but remember that in the late 50s Mort Weisinger managed to put three…"
1 hour ago

JD DeLuzio replied to Steve W's discussion A Cover a Day
"I don't know the "Reckoning War," but it does involve the Trial of the Watcher:"
2 hours ago

Richard Willis replied to Jeff of Earth-J's discussion T.H.U.N.D.E.R. Agents
"ISSUE #3: That cover evokes other great comics couples from opposite sides such as Will…"
6 hours ago

Jeff of Earth-J replied to The Baron's discussion Movies I Have Seen Lately
"We're down to out last disc! Four more movies! THE MANSTER (1962): "An American reporter…"
11 hours ago

Travis Herrick (Modular Mod) replied to Captain Comics's discussion Bond #3: 'Moonraker'
"Moonraker was the first James Bond film I ever saw. I was 6 when it came out, and at the time I…"
12 hours ago

Travis Herrick (Modular Mod) replied to PowerBook Pete, the Mad Mod's discussion Anything, Everything, or Nothing At All
"Last year, I really fell behind in my comic reading in general. As an example, last month I was…"
12 hours ago

Richard Willis replied to Jeff of Earth-J's discussion T.H.U.N.D.E.R. Agents
"I guess we'll never know.  I had to take a peek. Even though the page numbers end…"
13 hours ago