I just saw an interview with Oscar-winner Brie Larson, who plays a photojournalist in Skull Island. I wonder when they will start interviewing her about playing Captain Marvel.

Maybe. Hammer later received permission from Universal to make creatures resembling the Universal Monster in a couple of their later Frankenfilms (the guy with the axe is David "The Man in the Vader Mask" Prowse as the Monster): 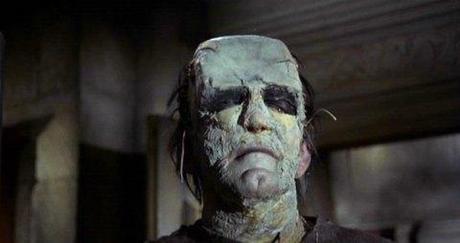 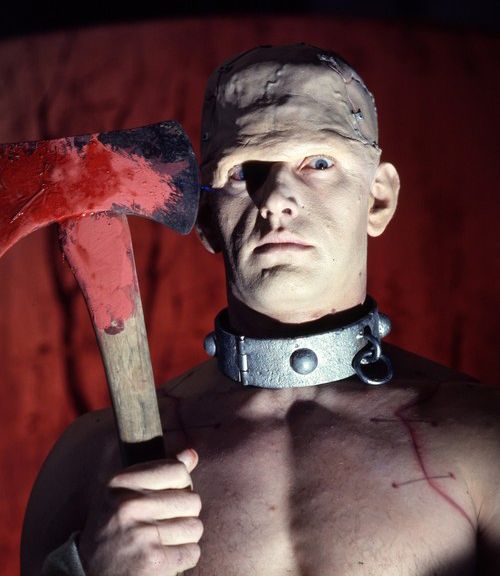 But then for their last film they kept Prowse but made him completely unlike any other Frankenstein Monster. Did Universal change their minds again?

You wouldn't think it would be that difficult to come up with a reanimated dead guy that didn't look like Boris Karloff.

Re-watched Furankenshutain no Kaijū: Sanda tai Gaira (1966).  They're definitely called "Frankensteins" in the original. They also have names. The brown one is "Sanda", and the green one is "Gaila"

Manchester by the Sea: brilliantly-acted, slowly-paced film about a man broken / breaking due to deaths of those close to him.

An Egyptian-made, Arabic-language, frequently shot-for-shot rip-off of Abbott and Costello meet Frankenstein: worth it for the novelty factor, but not much else. The Abbott surrogate is the short fat guy; the Costello one is tall with a style more akin to Jerry Lewis

In the last 24 hours: Suicide Squad, X-Men: Age of Apocalypse and Logan.  On my own for the weekend, and binging.

Nobody got that was a song in the English dub?

FRANKENSTEIN: THE TRUE STORY: Watched this for the first time in over 40 years last Friday. I’m surprised how much of it I remembered. What little I didn’t remember came back to me as I watched. This two-part TV movie must have made a big impression on me. I would have been nine years old when it was first broadcast. I was curious how well it held up. I think I would have enjoyed seeing it again after all these years either way, but it does hold up. The subtitle and tag line (“Just the way Mary Shelley wrote it”) are misleading, but it’s no less like the novel than any other adaptation.

I am now more familiar with the actors (James Mason, Jane Seymour, John Guielgud, Tom Baker, etc.) than I was all those years ago, so I enjoyed it on that level ,too. The monster looked as if he could have “evolved” into the one featured in Frankenstein Conquers the World.

THE BRIDE: This one features Sting as Frankenstein, Clancey Brown as the creature, and Jennifer Beals as the bride. It dispenses with the origin of the creature entirely (which I wish a lot of superhero movies would do). These two movies were set in England, so maybe (to fit my theory that all Frankenstein movies “happened”) each movie deals with a different branch of the family tree, Swiss, German, English, fictional countries, etc.

UP NEXT: I still have Jesse James Meets Frankenstein’s Daughter, Frankenstein vs. Dracula and Francis Ford Coppola’s version on queue. Yesterday morning, Tracy was bopping around on Amazon and ended up order every Frankenstein movie she found under $10, I don’t even know which ones but I think she ordered five or six. (Sadly, she didn’t order Bikini Frankenstein, though.) I intend to comment on those in the days to come, too.

Richard Willis replied to Peter Wrexham's discussion Celebrity Mastermind - "The History of DC Comics"
"The Baron said: We have a long history of "celebrities" on game shows and quiz shows here…"
59 minutes ago

Richard Willis replied to Jeff of Earth-J's discussion Tales to Astonish
"Jeff of Earth-J said: Ducking into a movie theater playing a newsreel, he briefly spots a man whom…"
1 hour ago

Steve W replied to Steve W's discussion A Cover a Day
"As it's still day one, here's another romance from me."
3 hours ago

Richard Willis replied to Jeff of Earth-J's discussion T.H.U.N.D.E.R. Agents
"I was catching up with other things and haven't yet read the IDW issues. I'll get to them…"
3 hours ago

Richard Willis replied to Steve W's discussion A Cover a Day
"When I saw Fantastic Four #4, the cover had a guy in swim trunks coming out of the ocean. He was…"
3 hours ago

Peter Wrexham replied to Steve W's discussion A Cover a Day
"The last few lines of the index now look like this, with the recently-agreed themes for March,…"
5 hours ago

Lee Houston, Junior replied to Steve W's discussion A Cover a Day
"I will be the first to admit that in regards to some aspects of fandom I am behind the times. In…"
6 hours ago

Jeff of Earth-J replied to Steve W's discussion A Cover a Day
""The BBC only considers the main series and a few online webisodes canon" Not so! Even…"
7 hours ago

Jeff of Earth-J replied to Wandering Sensei: Moderator Man's discussion What Comic Books Have You Read Today?
"It was actually the discussion of Tom Battiuk's retirement over on the "Comic…"
7 hours ago

Jeff of Earth-J replied to Jeff of Earth-J's discussion Tales to Astonish
"JOHN BUSCEMA - (#84-87): While TTA #84 is not exactly tyhe beginning of a new arc, it is a good…"
8 hours ago