Permalink Reply by Mark Stanislawski on September 7, 2013 at 9:23pm

Vampire Taint would be a good goth band name.

Okay, so whatever their literary influences, the Invaders don’t like the Crusaders because they are unknown, and untested.

Spitfie sticks up for them as they’re British and she likes the idea of the British King being guarded by Britishers rather than the hotchpotch group that makes up the Invaders.
I remember finding this a very important plot-point when these issues were new,- and I didn’t fully trust the Crusaders, because clearly they WEREN'T British at all!! – (Bear with me…!)… the clues were there…Dyna-Mite referred to himself as being a few ‘centimetres’ tall – instead of inches and Ghost Girl refered to her power as appearing a full ‘metre’ away from her true position – rather than 3-feet or a yard. !!
Proof positive that they weren’t true natives of my home country…!

As the Invaders prepare to ship out the crippled Lord Falsworth pulls Spitfire to one side with news that’ll change their lives….

We meet the Crusdaers again and learn that their powers were gifted to them as they couldn’t fight in the war without them, for various reasons and that ‘Alfie’ represents a mysterious government organisation he says they work for.

He is – of course- revealed as a Nazi and he has been lying to the duped Crusaders all along, to both discredit and replace the Invaders and murder the King…!
- I love the fact that he salutes the Nazi ‘Sieg Heil’ while on the telephone…!

Of all the Crusaders, it’s the mysterious Dyna-Mite who determines what Alfie was all about – and we find out that he genuinly has no memory of his background or history…a mystery for another day…

Dyna-Mite raises the alarm at Falsworth manor , even though it’s location, it’s relationship to the Invaders and indeed Dyna-Mites own memories …are a mystery to everyone…?

He remains with Spitfire and her father to recouperate as the Invaders race off to the showdown.

At a ship-naming ceremony the King is interrupted by our heroes.

The Invaders and the Crusaders battle whilst the truth is revealed and the King saved. Once they realise they were duped the Crusaders throw away their Alfie-given technology that made them heroes and Alfie dies in a Human Torch intigated car-crash that appears to take his life – but saves others he might have crashed into…honestly… that’s okay then..good for you Torch..!

With the King safe the Invaders return to the Manor to find their host and their teammate and the mysterious little-guy missing and a message that warns the team, quite melodramatically, not to follow them  or else! - rounds off the issue.

By the way, Hotchkins the butler gets a wonderfully toffee-nosed-stuck-up cameo here – the guy deserves his own stories…come on, one man’s Willie Lumpkin is another man’s Hotchkins..-no?

It is noted that all the Crusaders have tech-based powers and without Alfie’s contol they are useless or they give the tech back, except presuambly the Spirit of ’76 doesn’t hand his bulletproof cloak back – as I’m sure he stays around a bit to eventually be the first replacement for Captain America.

It is refered to that Dyna-Mite is presumably going to revert to full sized but….we know he doesn’t – as his powers come from elsewhere…

It was very nice to see that the Invaders actually amounted to a force worth having around this issue – it was the Torch and Namor that disposed of the bomb meant for the King, at last not just spectators in their own book.

That rounds out the Crusaders, and introduces Dyna-Mite whose link to the Falsworth’s is the lasting mystery going forward…but…before the advertised -

Next Issue: Meet MAJOR VICTORY! (No, he’s not just another red-white-and-blue super-hero! (and yet…!))

- we interupt in a sideways tale – to bring you the much awaited and already partly –discussed –but-it-fits-in-continuity-here – INVADERS ANNUAL #1…!

I missed those stories completely.

Ah. Mark. You see she was bitten by Baron Blood (go see above. We'll wait.!)
Anyway that bite caused her to need a transfusion from the Human Torch's universal blood-type which gave her her Spitfire powers. BUT although it isn't aparent until many years later ( I think) she gradually finds herself becoming more and more influenced by the vampire taint and gains the fangs that she struggles to deny...all still to come.......

When did Jacki shee become a vampire?

Preparing for the entry to INVADERS ANNUAL #1 I had to have a good look at Avengers #71 - which you all know - or will do when we get there - link with each other.

What I noticed was that I thought I had seen the cover before...? 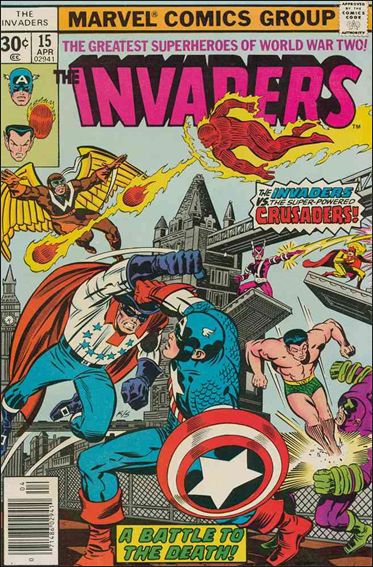 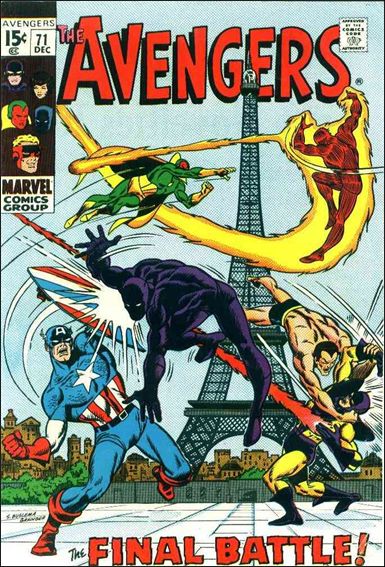 Permalink Reply by Richard Mantle on September 10, 2013 at 1:10am
See, I don't see why those two covers are so obviously similar. It is not a both-sides-same-story that I DID expect with Avs and the forthcoming annual.
Did the great Kirby just run out of ideas?
It's not even one of his own covers he's swiped?

When Kirby did covers for other editors' titles at Marvel in the 70s he worked from designs provided to him. Dave Cockrum talked about providing a design for a What If? cover in this interview. My guess is the party responsible for the similar design here was Roy Thomas. Also compare the covers of Invaders #16 and Avengers #78, and Invaders #35 (by Alan Kupperberg rather than Kirby) and Avengers #75.

Incidentally, the Spirit of '76's costume and bulletproof cloak were based on those of Standard's Fighting Yank, and his name was taken from a Harvey hero. Captain Wings's name was taken from an aviator hero who appeared in Fiction House's Flight Comics. A superhero called Thunderfist appeared in comics from the Canadian publisher Bell Features; he can be seen at the GCD on the cover of Active Comics #2.

We interrupt this thread with important breaking news! Everyone sitting down? Ready? GO HERE For the full press release, but here's a clue to the subject: I also enjoyed the linked review. I thought this frame 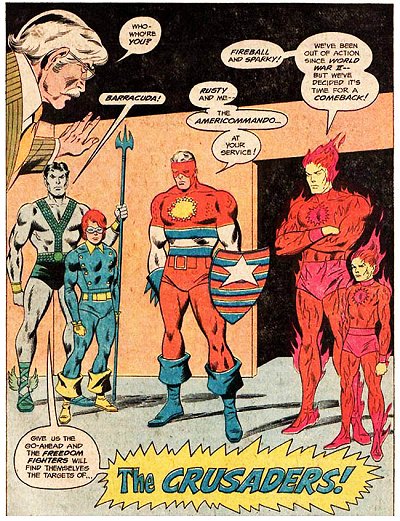 shows that creative contractions can backfire.

In addition to the entertainment definition, in Britain the word "circus" in place names is defined as "a rounded open space in a city where several streets converge". Piccadilly Circus is just the most famous one.

"here's a clue to the subject"

Why is the art so DARK?

Permalink Reply by Richard Mantle on September 10, 2013 at 2:39pm
Regarding the 'breaking news' - a new Invaders title.! An impressive creative team.?
It looks really good.!

Why no mention of Toro though? - and do we take it no Union Jack ? No Spitfire either - after her time in the MI 13 Captain Britain stuff?

I could be reading too much in yet though.