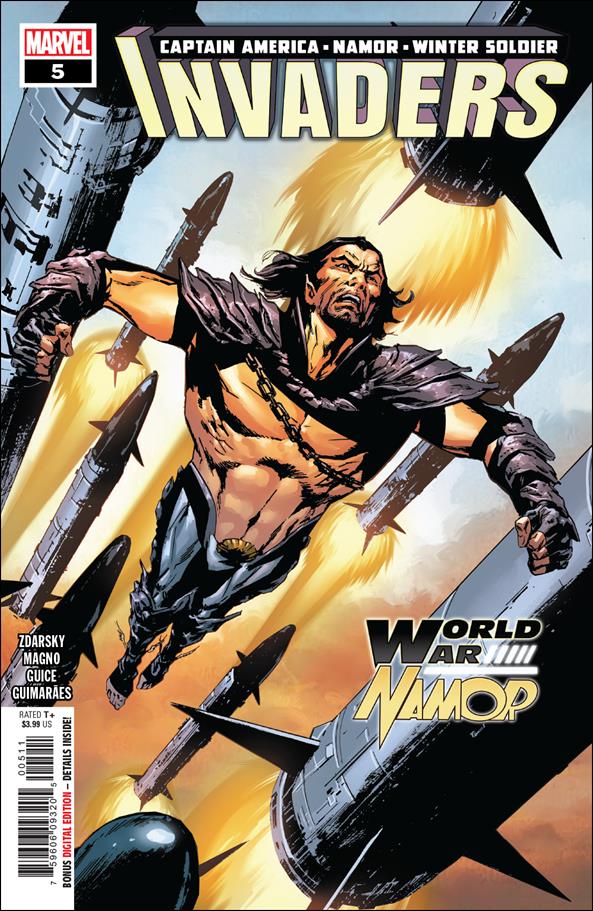 "World War Namor"
I don't like this punk/Movie-Aquaman look for Namor but I applaud the 'Namor' logo.

We open in flashback where the Invaders of 1945 are in full strategy meeting. Spitfire and Toro (Yes! Toro!!) are mentioned but offstage.
That continuity-implanted Invaders liaison Randall Peterson is part of the planning team acting as negotiator between Steve Rogers and angry Namor.

Present day Namor is seen to be viewing the scene from his memory with his 'imagainary-friend' Tommy discussing how important friends like Randall and even Bucky used to be to Namor back in the day.

We return to the present where Bucky/Winter Soldier is recovering in a hospital bed after being shot in the head last issue - "I;m fine... just got shot in the head, 's all..."
We learn the gun shot blanks which explains the lack of fatal effect.
The dots are connected and the name of the double-agent? -- Roman.
Cap relays that info to Jim Hammond at the Peterson house and Cap says it's time..."To Assemble the Avengers."
Jim flames on, kicking himself for not explaining their fears to Nay... "Dammit Jim... He's her son...you should have told her..." - by the way, this is the first time we've seen present-Jim in Torch mode and it's notable that he's still wearing his most recent stylised Torch uniform which I like both for continuity and aesthetics.

Torch vs Namor.
Namor reminds us of the Torch helping Atlantis rebuild after Secret Empire. (Apparently in Secret Empire Brave New World #5 which I admit I have read but completely blanked out - all I remember is evil-Steve wasn't Steve...ugh...)
The Torch presses, "We're y--your friends..."
Namor counters, "Yes. But you're in the way of peace..." and with a prompt from mind-construct Tommy shouts "For Atlantis." and...decapitates the Torch!
Yes.
Honestly.
Now, I know this happened to Namor in the Squadron Supreme series (before being retconned via time travel) but I didn't like it then and I really don't like him reversing the sentiment and decapitating his (one-time)friend.
If nothing else I don't like the ease with which this is done and the relegation of Jim Hammond to android/robot/toaster category.
It hurts.
It annoys.
It's not right.

Anyway, the Avengers arrive to find Atlantis now protected by a force-field. Iron Man tells Cap he told him so regarding Namor and Cap phones straight through to Roman's Admiral with his double-agent concerns.
The Admiral moves to side-line Roman but he catches on and... his loyal troops gun everyone else down! Namor's sleeper agents are more widespread and more violent than anyone guessed!
The Navy fire missiles towards Atlantis - which seems to be what both Roman and Namor actually wanted!

Eventually, Cap works it out - Namor wanted it to look like America fired first and Atlantis was only retaliating - in a just cause.
Namor has a further surprise, his missiles are not to be fired from Atlantis, the Avengers are in the wrong place, he can't be stopped.
The Human Torch's severed head asks what's going on as missiles explode and the cliff-hangs...!

So, aside from the devestating injury to Jim, I didn't think too much new was occurring this issue - and then we saw how committed Roman was and how clever Namor has been. This really is War vs Atlantis isn't it?

How are we going to get a redemption for Namor in this series? He's gone further than ever now hasn't he and it doesn't matter how much blame gets laid with Charles Xavier back-in-the-day, he's committing his worst actions now.

Beautiful art and a rattling pace.

I don't like this punk/Movie-Aquaman look for Namor but I applaud the 'Namor' logo.

If I was looking for a comic with Namor, I wouldn't have recognized him. His logo is all the way at the bottom.

Now, I know this happened to Namor in the Squadron Supreme series (before being retconned via time travel) but I didn't like it then and I really don't like him reversing the sentiment and decapitating his (one-time)friend.

They don't even need time travel to reverse this. He's an android, so they just reattach his head, right?

“He's an android, so they just reattach his head, right?” 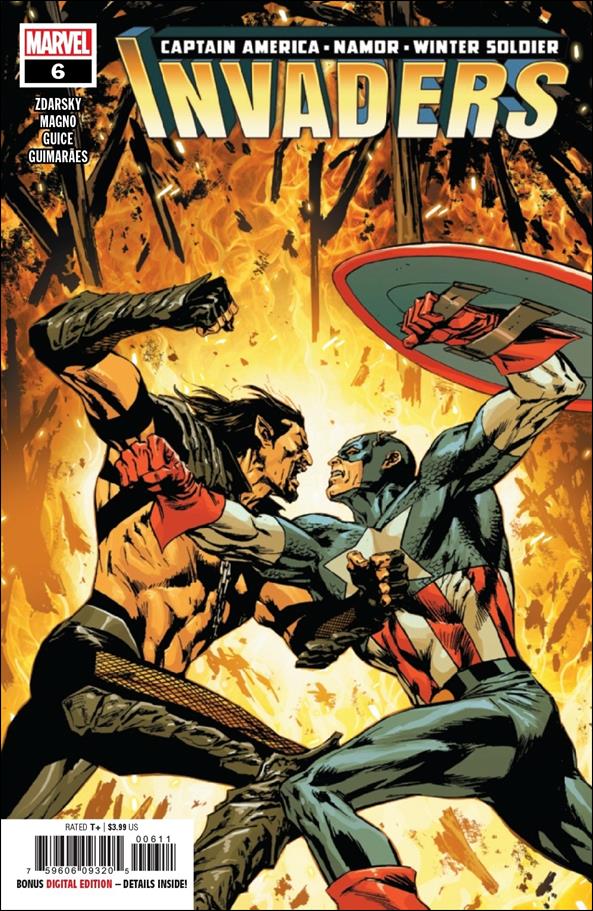 A wonderfully dramatic cover. Cap Vs Namor has been done before but there's a savage tone to this we haven't seen in a very long time.

Again I'm reminded of their clash in the Avengers/Defenders Conflict.

This issue opens in flashback to Germany 1945 and the Invaders (Or All-Winners Squad?) fighting Nazis and Master Man and Warrior Woman.

Again we see that Tommy Machon was with the Invaders in the day and how senseless destruction of innocents has always deeply affected Namor.

This contrasts to present day when innocents are being bombed ... by Namor's scheming.
The bombs on this occasion are chemical weapons and gradually everyone realises that the innocents are turning blue -- being changed into water-breathing Atlanteanesque people - this is to be Namor's offensive!

Captain America avoids the effects by breathing from a tank and comes across the severed head (but still talking?!) of Jim Hammond, the Original Human Torch.

In the skies Iron Man watches as Namor attacks with his armies and the sea - he's not happy,

"All right, you Bastard--" but Carol/Captain marvel intervenes - pointing out Namor flooding the town is actually saving the newly water-breathing people!

Cap realises his wartime friend Randall's daughter Nay is at risk back at her house and races to save her, vowing to make Namor pay if anything happens to her.

'Traitor' Roman Peterson celebrates Namor's tactics but as he changes to be a water-breather he is shocked as his fellow sleeper agents drown in the water having previously been changed from Atlantean to human... the change is NOT reversable!

Namor and Roman embrace in their common purpose.

Cap finds Nay, dying on the shore. He jumps into the sea with her, saving her life as her skin changes colour to Atlantean blue and Roma, Namor and their troops look on.
Cap is left behind.

Days later Bucky/Winter Soldier catches up with Tony/Iron Man having not seen Cap for some days. We learn 3,000 people are safe but now living underwater and they vow to find Namor.

Bucky reminds as we flashback that he used to be the closest to Namor... who's plan even then was...

"I will make a Better World."

So there it is, the end of issue 6 and the first (of a total of two eventually?) trade for this incarnation of the Invaders.
Wonderful artwork again throughout and enticing pacing keeping the pages turning and the interest high.
Is there really to be redemption for Namor?

Internationally to the public at large he must be an incredibly hated figure. I'm sure at some point he and the rest of the Invaders will shake hands and move on but I really don't see how he can be 'forgiven' by the masses very easily can you?

No quick repair here for the Torch. I'm sad that he was so ridiculously damaged and glad that he seems to have kept his character/memories etc rather than enter a 'blank-slate-state' (like Byrne did to the Vision) but I am glad such a devastating injury has not been fixed too quickly.

I am very much reminded of the Aquaman series-within-a-series about 'Sub-Diago' (IIFC?) where innocents ended up living underwater etc - anyone else remember those issues?

So, to sum up, I really enjoy this series and I love the art. I'm not entirely comfortable with everything that's being done with 'my' Invaders here but I am loving the fact that something 'important' is being done with them!
Where oh where will we be going next before this series ends...?

Invaders #11 ships tomorrow, so I guess it’ll be a while yet before the second tpb and the continuation of this discussion.

Yes, I am reminded, too, of Aquaman’s “Sub-Diego.”

By the time this series ends, you may find yourself wishing that the Human Torch was fixed a little more quickly. (‘Nuff said.)

Yes but only the slabbed books stayed mint! 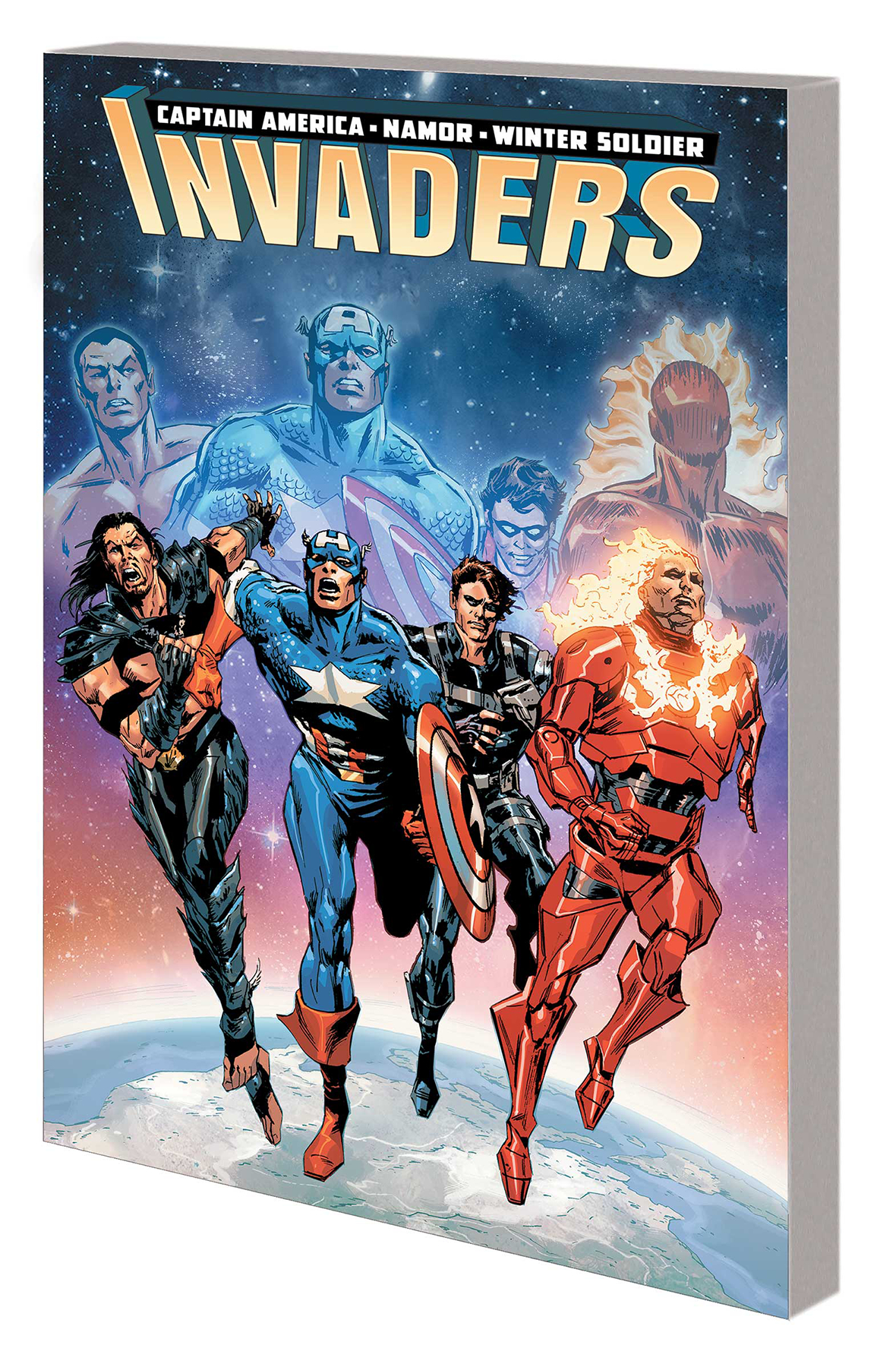 I know you warned us Jeff but...

I almost didn't post that image for "spoiler" purposes, but I figured it's on the cover; it would be the first thing you saw, anyway. Maybe this way won't be so much of a shock when you see the real thing.

Still no love for Toro though.