Every week, one item or another in my pull and hold stands out for me above the rest in one way or another. Sometimes it’s a periodical, sometimes a graphic novel, sometimes a collection. Does that happen to you? If so, let’s hear about it here. It can be an item you’ve long anticipated or something you bought on a whim. If it’s something you were really looking forward to but ended up being a big disappointment, let’s hear about that here, too. I’ve been meaning to start this topic for a long time now, but chose today to post about something I’ve been waiting for a long time, long before it was even solicited.

This is a favorite run of mine, but I’ve read it only twice: once as it was released, and I re-read it once after that. It came out as an “ESSENTIAL” a few years ago, but for this I held out for color.

EDIT: Most weeks I make my picks before I have read them, but feel free to choose either the books you anticipate most before you read or enjoy the most after you have read them.

I really liked Nexus at first, but I began to have misgivings when I realized that no matter how pretty these people were drawn, that Hellpop was, for all intents and purposes, a hired assassin. Yeah, he mostly killed bad folks, but it was no-bones-about-it murder, and he didn't have a choice in those targets, so it's not like HE was doing it on purpose (the Merk was). He would kill whoever he was pointed at.

And when he was not killing people, what was he doing? Helping people? Making life for people around him better? Nope, living in luxury. Letting other people struggle while he enjoyed the best of life. he was eternally adolescent in all his decisions and behaviors, not considering others or consequences.

At some point, I came to the conclusion that Horatio was an a-hole.

I eventually dropped the title as a result. Someone other than Steve Rude drew the title, or maybe it was some miniseries or other, but the inferior art made It clear to me that I liked the book for the art, not the story. And from that point on the story (and Baron's increasingly eccentric dialogue) bothered me too much to over come the art, and I stopped buying it.

But, you know, that's just me. I don't want to rain on anyone's parade -- if you still vootie, vootie away! But that's why I didn't think to include the collection in the Comics Guide. I'll do so when the next one comes out.

In Horatio’s defense, he did establish an asylum (his moon, Ylum) for his victim’s victims. In his spare time, he studies archeology and other scholarly pursuits. He once gave up the role of the Merk’s executioner in order to become a priest. If you haven’t read any of the Dark Horse Nexus, now only Steve Rude does the art. I can’t recommend these particular stories (because I haven’t read them yet), but the series of mini-series leading up to them have all been good.

Baron and Rude also have a weekly Nexus/Moth comic strip, available through the mail only. Nexus fan that I am, I didn’t subscribe, though, because 1) I think it’s a little pricey for the page count, 2) my mailman folds everything he puts in our box, 3) I’m not certain how much of it is in the can (Rude is notorious for missing deadlines), and 4) it will probably be collected in a year or so, anyway.

I’m patient, though. As I said above, I waited a long time for the DHP material to be collected.

Oh, he's definitely a very grey character at best. I like Judah quite a lot, though.

And again, I don't mean to rain on anyone's parade. If you're enjoying Nexus, more power to you. I don't enjoy not liking things, as the more things I like the broader my experience and the richer my life. And I miss not being on the Nexus bandwagon with the cool kids. Maybe someday I can re-read Nexus from the beginning with a fresh perspective, and like it again. But with so much new to read, that's not likely to happen until I retire!

Even though I've been complaining about the cost of this ($15) over on this week's "Comics Guide", I think the replica edition of Moon Girl and the Prince is my "pick of the week." My wife's (Tracy of Moon-T) symbol is the Moon, just as mine is the Earth. I don't know if we'll continue to buy these at this price, but we now have issue #1 and issue #5 (which contains the first EC horror story). 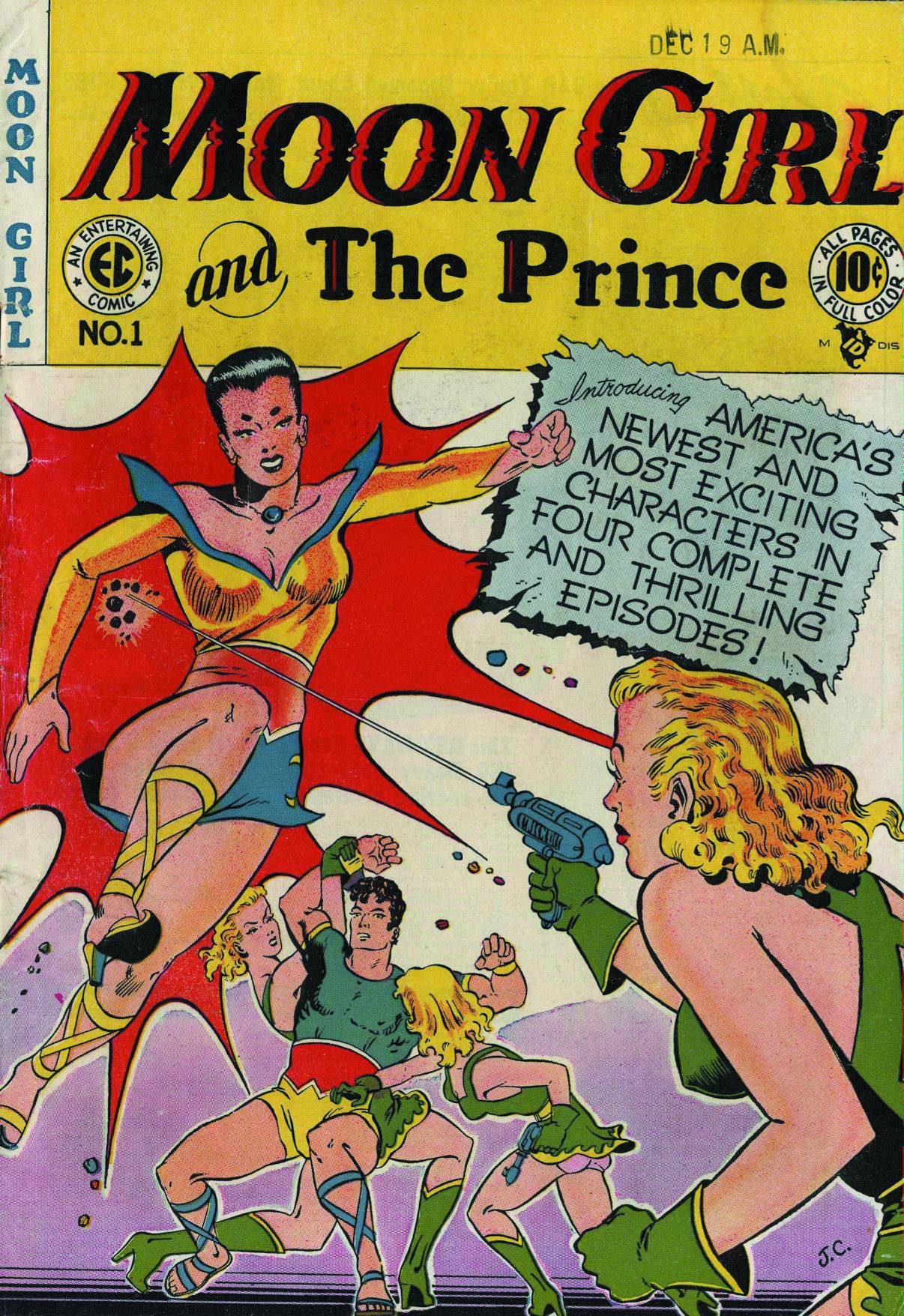 That's a pretty severe haircut on Moon Girl. Must be warmer on the moon than we've been told. Also, she should re-consider the eyebrow trim.

And what's wrong with the girl second from right? Not only is her waist super-elongated, but she appears to be hiding something in her underwear. Lunch, maybe?

Are there new releases today , before Christmas Day ?

Next week , before New Years' ?

Yesterday, actually. But yes, unlike in the last few years, there are new releases both weeks. Wednesday is apparently far enough from the holidays this year for it not to be a pain in the neck for all the distribution points involved. My local show is open next Wednesday only; they've gotten accustomed to taking the full week off, and I can't blame 'em!

Permalink Reply by Wandering Sensei: Moderator Man on December 26, 2015 at 10:28pm
The only one I've read so far, admittedly, is Dark Knight III #A2. I really did love it, but I have been reading a lot of other stuff, had a lot to do, a lot of gifts to wrap, Christmas Day and all that...

About Moon Girl's eyebrows, they're like that throughout every story in issue #1. By issue #5 at least, she has taken Cap's advice.

Whenever it has shipped, Captain America: White has been my "Pick of the Week" and today is no exception. These Loeb/Sale "color" mini-series may not be in continuity, but you can always count on them being well-written, well-drawn, and above all entertaining.