#189: (Reprints FF Annual #4.) When I first decided to accumulate a collection of FF backissues (or reprints), #189 was an issue I acquired long before got a copy of the actual first modern appearance of the original Human Torch.

#190: "Album Issue" the cover proclaims. Uh, oh. The last time Marvel pulled that was in the middle of Jim Steranko's Captain America (but at least that time it was drawn by Jack Kirby). #190 is drawn by Sal Buscema, which wouldn't have been so bad, but "writer/editor" Marv Wolfman got Tony DeZuniga to ink him. Never one of my favorite inkers, DeZuniga is prominent in the concurrent run of Thor I'm also currently reading. I've gotten used to him there, but here he absolutely ruins Buscema's pencils. (IMO) At least the last time we saw Sal Buscema in these pages (#182-183) he was inked by Joe Sinnott.

The "story" (such as it is) consists of Ben reading to Alicia from the "diary" he's apparently been keeping since the early days of the FF. His entries (or at least those he shares with Alicia) consist entirely of when one member of the team or another temporarily quit for one reason or another. Alicia points out that they always got back together because they are really a family, but Ben counters that it's never been Reed who quit before. He then destroys his diary, which is probably just as well.

NEXT: The long-delayed "Four No More!"

#190: Len Wein is back as writer/editor, George Perez and Joe Sinnott are back on art, and the story picks up where it left off at the nd of #188. It's moving day at the Baxter Building, and Reed is overseeing a squad of S.H.I.E.L.D. agents packing up the FF's equipment. Johnny talks about joining the racing circuit, Sue ahs been offered a movie, and the team go their separate ways. Reed calls them all back for one last hurrah, however, as the "S.H.I.E.L.D. agents" are actually the Plunderer and his men. After they have been dispatched, though, the FF again leave... for good?

There are only a couple of issues left in Len Wein's tenure as writer/editor, but in his introduction, he revealed where he had planned to go with the stories for the next year after the team split up: "For the first third of the year, I planned to do solo stories with each member of the team, advancing the stories of the other members through subplots; the second third of the year, I'd start teaming them up in mixed pairs, and, by the end of the year, the Fantastic Four would be together again."

There are two tpb collections of Fantastic Four Visionaries: George Perez, which comprise all of his issues from #164-192 plus annuals. If all you are interested in is George Perez, those would probably be fine, but if you're interested in the stories, MMW v17 would be a good one to have as it's nearly all Perez. (The previous volume was about half Perez.)

With the FF broken up, at the end of this volume, that's a good time to take a little break.

#190: "Album Issue" the cover proclaims. Uh, oh. The last time Marvel pulled that was in the middle of Jim Steranko's Captain America (but at least that time it was drawn by Jack Kirby). #190 is drawn by Sal Buscema, which wouldn't have been so bad, but "writer/editor" Marv Wolfman got Tony DeZuniga to ink him. Never one of my favorite inkers, DeZuniga is prominent in the concurrent run of Thor I'm also currently reading. I've gotten used to him there, but here he absolutely ruins Buscema's pencils. (IMO) At least the last time we saw Sal Buscema in these pages (#182-183) he was inked by Joe Sinnott.

I've seen people complain that Tony de Zuñiga -- whom I do like, thanks to his work on Weird Western Tales and Jonah Hex -- overwhelmed John Buscema's pencils on various Conan stories. But "absolutely ruins" Sal Buscema? Sal Buscema's art is about as generic as can be, and needs all the help it can get. Just about every inker who put put their pen to his work made it better (except, of course, Vince Colletta).

"I've seen people complain that Tony de Zuñiga... overwhelmed John Buscema's pencils... Sal Buscema's art is about as generic as can be, and needs all the help it can get."

I agree his style was better suited to westerns than superheroes.

#190: "Album Issue" the cover proclaims. Uh, oh. The last time Marvel pulled that was in the middle of Jim Steranko's Captain America (but at least that time it was drawn by Jack Kirby).

I never made the connection. The Captain America issue was also a retrospective fill-in, so it probably directly inspired this one. I note Kirby did the cover.

Wolfman wrote a similar Spider-Man retrospective for Amazing Spider-Man #181, the start of his run on that title.

By the point you've reached Dave Cockrum was designing many of Marvel's covers. His last issue of X-Men from the period appeared the month of Fantastic Four #187.

Walt Simonson (from his introduction to MMW Thor v16) on Tony DeZuniga: "My only regret now is that tony is no longer around for me to thank. I didn't fully appreciate his finishes at the time, but i wouldn't mind telling him now that he did a fine job making me look good!"

With this volume we transition from the Len Wein era (#192-194) to the Marv Wolfman era (#195-203 and Annual #12), with art by Keith Pollard (#193-201, 202 and Annual #12). As the volume opens, Wein continues with his plan to have the team operate individually or in sub-sets for a while, but Wolfman's idea is to reunite the four as quickly as possible. Johnny is on the drag race circuit and his story reintroduces Wyatt Wingfoot (briefly) and his girlfriend (and racecar driver), Rebecca Rainbow. The Torch's villain is the Texas Twister (formerly seen auditioning for the Frightful Four).

Reed has been hired by Arthur Thornhill of Cynthian Associates at $20,000 a week... 20 times more than the Avengers' piddley little "stipend." (This is what I was setting up last week when I indicated a member of the FF ought to be pulling in six figures at least.) By the next issue, however, his pay has been reduced to a "mere" $1000 per day... still seven times what the Avengers offer. No explantion is given for this difference in pay, but I suspect the $20K number was offered to him as a consultant. (A consultant will generally receive more pay up front than an employee because the work is temporary.) But by the next issue he is said to be on salary at the more modest (but still reasonable) sum of $364K. I imagine some off-panel negotiations went on between issues when Reed indicated he was looking for something more permanent.

Ben has been hired by NASA to test the new space shuttle, where he runs afoul of Darkoth (thought killed in #144), now revealed to be Desmond Pitt, Ben's old pal from his test pilot days. Diablo is puloing the strings, but Pitt was lured with promises of revenge against Dr. Doom, not Ben Grimm. Without the rest of the team, this sub-plot reads like an issue of Marvel Two-In-One without a guest star.

Sue is in Hollywood (with the Impossible Man), and #195 features a nice little team-up/reunion with the sub-Mariner.

The title of #192 is from the aphorism "He who soweth the wind shall reap the whirlwind", which the net tells me derives from Hosea 8:7.

The story builds on the bit from the earlier Twister's first appearance where he passes up the opportunity to join the Frightfuls because he's had a better offer elsewhere. Supermegamonkey says his employers were revealed to be SHIELD trying to recruit Johnny. I take it that was in Captain America.

I've long wondered if Rebecca was intended as a love interest for Wyatt or Johnny. Her first encounter with Johnny is a movie-style meet-cute.

Was this the first time Johnny was depicted as a racer?

In his early Strange Tales solo appearances he was depicted as a hot rod enthusiast, but I don't recall him ever racing professionally. (He will again in the Byrne are.)

#196: Ben and Johnny join Sue in Hollywood, reuniting three of the Four only to be attacked by the Invincible Man. In the Invincible Man's only previous appearance, he was the Super Skrull masquerading as Franklin Storm, Sue and Johnny's father. This time, the Invincible Man's alter ego is none other than... Reed rRchards himself! There were plenty of hints for readers to figure out who was really behind the scheme, but plenty of red herrings to throw them off, too. In the end, the villain stands revealed as... DOCTOR DOOM! 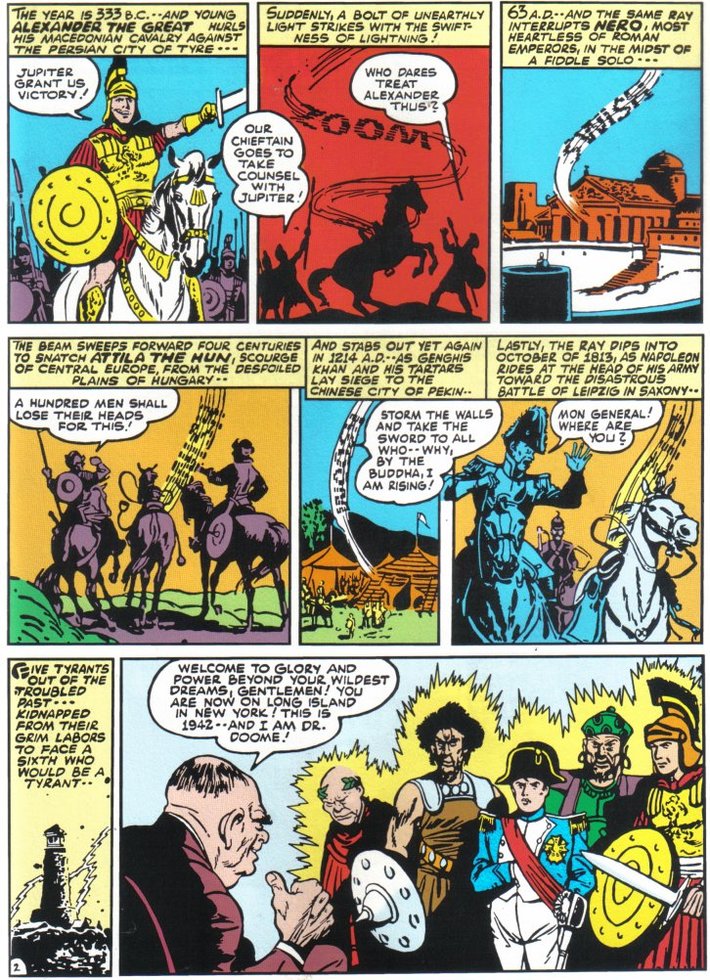