Those early Amazing Spider-Man issues are favourites so I look forward to when you reach them.

It took me literally decades to pin down where the Savage Land was supposed to be and even then I got it mixed up with some similar place beginning with P.....?

"When did they establish that Ka-Zar was on Skull Island and not underground in Antarctica?"

Daredevil #12 is the first mention of Skull Island, but in the MU, "Skull Island" is in the Savage Land. Apparently, Ka-Zar lived there, but in this story, I don't think he ever set foot on it. I'm pretty sure that the cave at the end is on the "mainland." And I've never heard the rumor you allude to.

"It took me literally decades to pin down where the Savage Land was supposed to be and even then I got it mixed up with some similar place beginning with P....."

Pangea. Yes, that is introduced in the '80s. I don't foresee going quite as far as the Ka-zar the Savage series in this discussion, but who knows? Essentially. the "Savage Land" is a "suburb" of Pangea. 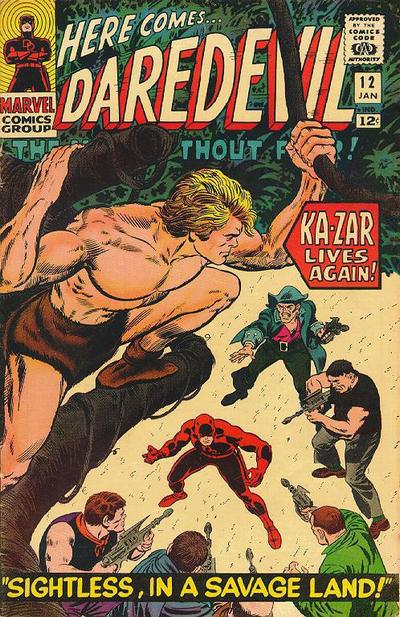 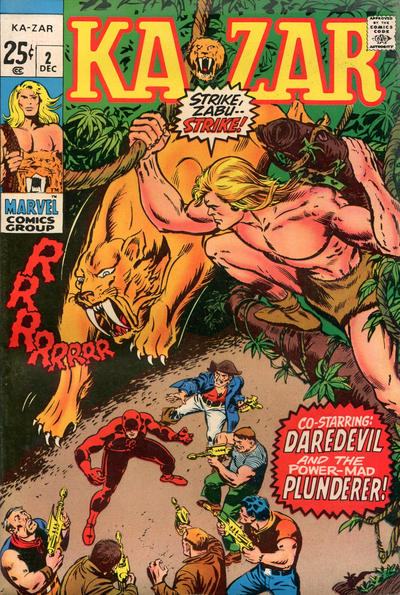 SYNOPSIS:Daredevil revives just in time to counter Maa-Gor's attack, but due to the expolosion he suffered last issue, he has lost his radar sense. A fight ensues. Meanwhile, Zabu has come to Ka-Zar's rescue, slashing the tendrils of the man-eating plant. Ka-Zar then sets the plant afire and gives his victory cry. Nearby, the Plunderer and his men hear it and approach Ka-Zar's cave. Inside, the fight is not going well for Daredevil. Hearing the scuffle, the Plunderer fires into the cave thinking he is saving Ka-zar (for reasons of his own, yet to be revealed). I should metion at this point that the Plunderer's men are not necessarily loyal. A sailor named Slagg is particularly treacherous.

Ka-Zar is on his way back to the cave with the healing ju-ju berries when Zabu falls into a pit dug by the Plunderer's men. Ka-Zar attacks but is halted by the Plunderer who reveals the other half of a medallion Ka-Zar has in his possession. Parnival Plunder reveals that Ka-Zar is really his brother Kevin, and that his own search for Atlantis was really a ruse. Ka-Zar is then caged, but not before tossing the restorative ju-ju berries to Daredevil.

They then return to the Plunder estate in England, but Parnival's butler, Feepers, isn't exactly loyal, either. the Plunderer then reveals the story of his father, the first Lord Plunder, an explorer who discovered the Savage Land and an as-yet-unnamed mineral, pretty much the exact opposite of Vibranium. That is, instead of absorbing vibrations, it causes them. the two halves of the medallion are the key to accessing the store of the mystery metal.

The Plunderer is counting on Daredevil to get Kevin's half from him, but when he pushes DD into the prison pit, Ka-Zar attacks. Topside, Slagg betrays Plunder, but Feepers kills Slagg. Meanwhile, Daredevil vaults over Ka-Zar's back and gains his freedom. Daredevil then helps Ka-Zar escape, thereby winning his trust.

Feepers kills Slagg and is revealed to be a member of an "international espionage network," and when he reports what has happened, the news immediately leaks to spy networks around the globe. Parnival Plunder takes advantage of his standing in the community to call the police and blame Daredevil for the murder of Slagg and name Ka-Zar as his accomplice.

COMMENTARY: The art this issue is Romita working over Kirby layouts. It's interesting to compare the results to the Romita-only post-Kirby issues of the Fantastic Four in which Romita was endeavoring to ape Kirby's style. This is better.

I hadn't seen the Ka-Zar #2 cover before. No, the rumor was that the Ka-Zar character on the cover of DD #12 was changed into Ka-Zar from an entirely different character.

SYNOPSIS: Daredevil is merely stunned by the grenade; Ka-Zar is knocked unconscious. the grenade was fired by Boswell, a confederate of Feepers'. Leaving Ka-Zar behind, Daredevil trails Boswell back to Plunder's estate. Plunder is confronting Feepers with his suspicions that Feepers is a traitor when boswell arrives. Feepers orders Boswell to shoot, but Plunder drops and Boswell shoots Feepers instead. Plunder now has both halves of the medallion.

Daredevil confronts Plunder as the police arrive with Ka-Zar, who they found outside, still semi-conscious. Still under the impression that daredevil killed Slagg last issue, the police try to capture Daredevil but he escapes. Daredevil knows Ka-Zar will need legal representation, so he sends a cable to Foggy in the States. He and Karen immediately hop a plane bound for London. I wouldn't have thought that Foggy could legally practice in England, but oh, well. I wonder what Bob Ingersoll would have to say about this...?

Using both halves of the coin, Plunder uses it to open the vault concealing the "Plunder-Stone" and uses it to power his "vibra-ray." He then dons a white leotard with blue trunks, cape, boots and gloves as more befitting the future "Monarch of Mankind." He clothes his minions similarly and provides them with weapons unaffected by the vibra-ray's destructive effects. Daredevil conks one of the thugs, dons his uniform and takes his place among the crew. then they all board the sub nd head for an "early warning missile base somewhere in the North Atlantic."

By this time, Foggy and Karen have arrived in L:ondon and Ka-Zar's trial is under way. (I know... the pacing of this story is unbelievable.) Ka-zar breaks free of the chains binding him, but is soon brought down by gas.

Back at the missile base, Daredevil somehow uses his senses to deduce (don't ask me how) that the Plunderer's men's weapons are immune to the effects of the vibra-ray because they are made of plastic. Once that secret is out, that's all she wrote and the Plunderer confesses to his crimes and clears his brother. Once that information has been dispatched to Britain, Ka-zar is cleared.

Matt joins Foggy and Karen before Ka-Zar has even regained consciousness from the gas and ponders, "I wonder what will become of him? Will he remain in civilization, to claim his birthright? Or will he return to his beloved jungle?" Perhaps we will learn the answer in "The Mystery of the Midnight Stalker!"

SYNOPSIS: Daredevil’s most recent adventure has landed him in Britain, where his hand brushes against the headline “Lord Plunder Turns Savage Once More!” Kevin Plunder inherited his father’s title and estate when his brother Parnival was sent to prison, but now he is suspected of being the “Midnight Stalker” based solely on the circumstantial evidence of bare human footprints and tiger paw tracks. A quick check, though, reveals that Ka-Zar’s brother has escaped prison. With that knowledge in mind, Daredevil rushes off to help his friend.

Sneaking past police lines, Daredevil enounter’s Ka-Zar inside the castle, but Ka-Zar doesn’t trust him. After a tussle, Daredevil allows Ka-Zar to throw them both from the roof and they fall into the sea bellow. As Daredevil suspected, the Plunderer’s submarine is there. They defeat him, he confesses, and Ka-zar pays Matt Murdock’s air fare home.

Incidentally, Daredevil quips, “Shall I call you ‘Kay’ or ‘Zar,’ putting the pronunciation issue to bed once and for all (I hope).

Am I remembering right that "Zar" means "tiger" and "Ka-Zar" means "brother of (or to) the tiger"?

Yes, but that applies to the Golden Age Ka-Zar who debuted in Marvel Comics #1.

Have you asked the modern Ka-Zar? Might be the same.

I think he took his name from a box of Ka-Zar pulps his dad took along to the Savage Land, so indirectly, I guess.