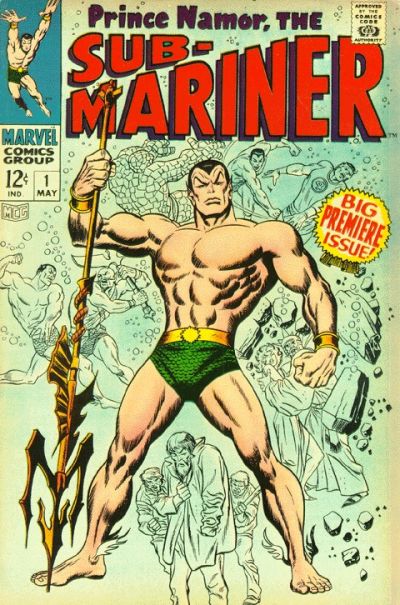 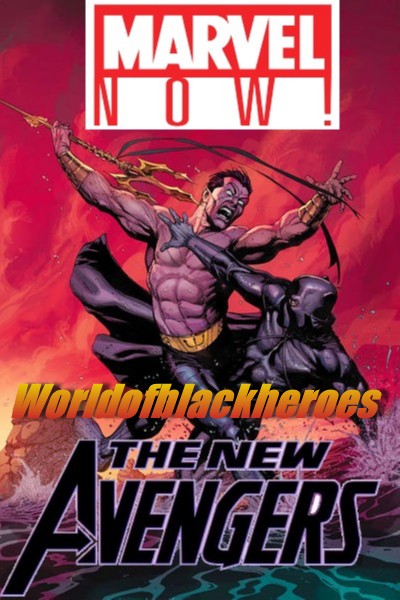 After the events of New Avengers #21-23, it will be hard to categorize Namor as either a hero or an anti-hero. His actions are so atrocious that I can't see any of his allies not trying to bring him to justice. Or have him executed for war crimes. Marvel's Oldest Hero has become its newest villain and that, my friends, is a crying shame.

Don't get me wrong. I never minded the obnoxious, arrogant, holier-than-thou Avenging Son. For the most part, he had justifiable reasons for his anger, not to mention biological. But he always was willing to do the right thing and for all his bluster, he had no problem joining forces with others: the Invaders, the All-Winners Squad, the Defenders, the Avengers and even the X-Men. And he was also a king/ruler of his people like Doctor Doom, the Black Panther and Black Bolt. He had responsibilities and agendas and protocols. He had hardships, tribulations and trials. He has seen family, friends and lovers murdered in front of him. He never considered himself a "super-hero" thus making him someone that you didn't want mad at you. I never had any trouble picturing Namor slaying his enemy if that was what he thought was warranted. "Imperious Rex!"

The Sub-Mariner has committed act of war before from Fantastic Four Annual #1 to Civil War #7 but they were always either forgotten or forgiven. He was a war hero during WWII, saved the day hundreds of times and could be considered Timely Comics' Superman. Stan Lee and Jack Kirby knew how important and different he was from any other character, featuring him in most of their Silver Age titles until he once more had an ongoing title in Tales To Astonish. Marvel has kept him in the spotlight with at least seven or eight different series from 1968 to today.

But now, all that has changed as Namor has admitted to twice trying to eradicate Wakanda and all its citizens in New Avengers #22 and destroyed a parallel Earth to save his own. And has formed his own evil Cabal (including Thanos!!!) to continue to do so. He's one of the stars of the All New Invaders but with the events of New Avengers, Captain America and Original Sin, I'm not sure how long that book will last.

There are many crimes that one can be absolved of but genocide? I don't know where Marvel is going with this but eventually there will be a reckoning. The Avengers will not Namor and his Cabal at all costs and a Marvel Legend and one of the Greatest Golden Age Heroes will be forever diminished. I won't say that he will be killed because why bother? Nor will I say that he'll never be a hero again. Because we all know better. But whether readers accept him again is another thing altogether.

But why do this to the Sub-Mariner in the first place?

My theory has to do with Marvel's principle priorities right now: movies and character ownership.

There has been many rumors about a Sub-Mariner movie or TV show for decades but nothing came from them. Universal was said to own the movie rights though Marvel claims to have them now. But what direction could a Sub-Mariner film go? One rooted in his 1939 version attacking NYC, with presumably no Human Torch to combat him. Or his Silver Age return, presumably without the Fantastic Four but again attacking NYC. Either way he's not coming off very heroic or sympathetic and if they show his reasons for attacking the Surface World then we become the villains of the movie! That's a hard sell either way.

Also, you would a mostly naked man in the starring role and that might make some people...uncomfortable. Which is why it's been years since they've made a Tarzan movie.

And the Sub-Mariner has an acknowledged creator, Bill Everett. This is undisputable even by Marvel. There is no committee/editorial input/multiple creator excuses. Bill Everett created the Sub-Mariner. Sadly Namor has been ignored by the producers of Disney XD's Ultimate Spider-Man, Avengers Assemble and Avengers Earth's Mightiest Heroes animated heroes where credit was given to Joe Simon and Jack Kirby for Captain America so we don't know if Everett would have credited as well.

Still, if Universal or Marvel did produce Sub-Mariner: The Movie, they would have to credit Wild Bill because they would have no choice because the fans, comic historians and come creators past and present (hopefully) would demand that they do. This isn't a Bill Finger situation. Legally, since Marvel has already acknowledged it, they would not be able to ignore him. Then there would be the outcry for the Everett estate for financial remuneration, if none were offered. It could even lead to losing the rights to the character as a worst case scenario for Marvel since Namor wasn't specifically created for Marvel/Timely.

It would probably be more grief than it's worth as the Sub-Mariner is neither an important Avenger nor X-Men.

The madness of Namor's current path has no positive spin. It may create drama and may lead to a good story but at what cost?

The deaths are more personal this time. The previous massacre may have been "mitigated" when Namor was killed then resurrected but how often can you do that?

The enmity between Atlantis and Wakanda was referenced as was Namor's past with Captain America. Conveniently the person who might have done the most good here, Doctor Strange, was absent.

Also they have Namor withstanding the combined power of Thor, Iron Man and She-Hulk which seems iffy at best.

And while Namor truly believes that he is in the right, he's still an arrogant, smug and sexist bastard!

He's always been arrogant and unlikable, at least for me. Back in the Silver Age, the one Marvel book I didn't care for was Tales to Astonish, which starred an arrogant strong guy and a stupid strong guy. Not exactly the kind of fellows I wanted to hang with back then.

NEW AVENGERS #21-23: The title of this comic is “The New Avengers” but it might just as well be “The Illuminati” because that’s who it’s about. Let me just say up front that I dislike the Illuminati… not necessarily the idea but the execution… for the same reason I dislike Star Trek: Discovery: both are continuity implants which have no regard for continuity. Not only doesn’t it fit, it can’t. But I digress.

I find the events in question to be a very “writerly” artificial construct, designed solely to present a philosophical conundrum. As such, I find it difficult to take seriously. Here is the situation: two universes are about to collide. The only way to save their own is to destroy the other. Their own universe is populated by “hundreds of trillions”; the other universe contains “mere billions.” What is comes down to is the willingness to sacrifice billions for hundreds of trillions. On paper, the answer seems obvious. To do nothing would result in the deaths of hundreds of trillions plus billions.

The Illuminati have a device capable of destroying the other universe, and it falls to Mr. Fantastic to use it. But he can’t. Iron Man, the Hulk, the Beast, Dr. Strange and Black Bolt all refuse in turn. Then the Black Panther steps up and accepts the responsibility. But when it comes right down to it, he can’t do it, either. Finally, Namor steps in and sacrifices billions to save hundreds of trillions. The others are so disgusted at Namor for carrying out their own plan that they kick him off the team. (The Black Panther is particularly miffed, but that’s a whole other thing.)

The whole question of assigning blame is moot, however. What if they had gone ahead with the original plan and Reed Richards pulled the trigger? What if Stark or T’Challa or any of the others did before Namor stepped up? The answer would be the same: They would all share the guilt equally. The Illuminati (and writer Jonathan Hickman) do seem to understand this point, as they spend the entire next issue acknowledging their own roles in the situation (which is the actual point of the story).

Then, the same situation arises again. Another “incursion” is due, and this time the Illuminati decide to do nothing about it and accept their fate. The seconds count down to zero and… nothing happens. Did they miscalculate? Did they destroy a reality for no reason? What a minute… where’s Namor? Namor has assembled a group (yes, including Thanos) to proactively seek out and destroy potential “incursion” realities. These three issue take place in the middle of a long arc which began as early as #6 and which goes as long as at least #41 (according to Wikipedia; I have not read them), but they are the ones which deal specifically with the point under discussion.

Namor is eventually tracked down and decapitated for his role in the deaths of multiple realities, but due to the effects of magic acting upon a time machine, he is restored to life some months later. Next…

AVENGERS (v8, I think) #9-10: According to Namor, “Yesterday, on the western coast of the United States, a group of Atlantean children emerged from the waves, holding hands… and walked onto a beach.” They were seeking sanctuary from the polluted sea, but “those children died in the sand, choking on the poison air. While the humans stood by and watched. And laughed at the funny, flopping fish.”

Presumably those events happened in the previous issue, which I have not read. I don’t know how reliable of a narrator Namor is, but something along those lines surely happened. Apparently there was another incident, too. Namor again: “Three days ago, those from the world-raping corporation known as Roxxon murdered my people and hung the bodies from the side of their whaling ship like bloody trophies.” So, what does Namor do about it?

He sets out to assemble a group of beings, most of questionable moral character, he calls “The Defenders of the Deep.” First he encounters his old friend Stingray fighting their mutual enemy Tiger Shark. Namor gives Stringray the option to either join him or to leave the sea. Stingray refuses to do either one, so Namor beats him brutally and leaves him to be mauled by sharks. (Stingray lives, but I don’t see how.) Tiger Shark joins him.

The two Roxxon sailors specifically responsible for the first incident are being held at the Red Sands Federal Penitentiary. Namor (somehow) causes a toilet in their cell to overflow and drown them. (The cell wall is apparently made of plexiglass or some such substance…?) In issue #10 (“Legacy” #700), Namor and the Defenders of the Deep fight both the Avengers and the Winter Guard. But it was getting late and I wanted to go to bed, so I decided to read just the parts germane to this discussion. I ended up skipping most of the issue.

I can’t fault Namor, especially under the circumstances, for recruiting a group to defend Atlantis (although I might dispute his choice of personnel). Given who he is, I’m sure he feels justified in the execution of enemies of the state, with or without due process. It was pretty stupid of him, however, to savagely attack his longtime friend. I think they are starting to plant the seeds of his eventual redemption in Invaders, but I will wait to discuss that until Richard Mantle gets to it in his “Complete Invaders” discussion.