'Resident Alien' is a good TV show, but it's a better comic book 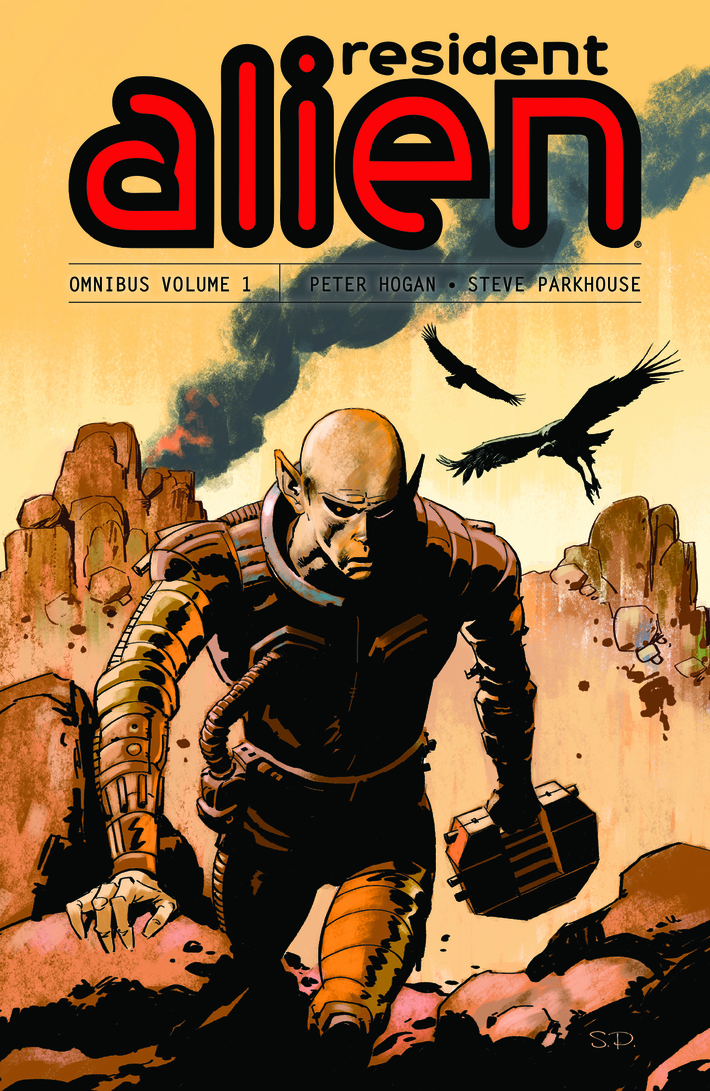 Feb. 4, 2021 — Now that you’ve watched Harry Vanderspeigle on Syfy’s Resident Alien, you should read about him in Dark Horse Comics. I think you’ll like the comics version better.

Not because the TV show isn’t good — from what we’ve seen so far, it is. But that’s mainly because of the comic timing of Alan Tudyk, who plays Vanderspeigle.

Tudyk is a familiar face (and voice) to fans of genre shows. He played Vandemeer “Van” Wayne, Bruce Wayne’s hapless cousin, in the underrated Powerless. He portrayed Mr. Nobody, the big bad in the first season of Doom Patrol. He was the voice of K-2SO in Rogue One: A Star Wars Story. And so on. Like Chicken Man, he’s everywhere, he’s everywhere.

And he is brilliant as Vanderspeigle, an alien pretending to be one of us, whose only guide to human behavior is television (primarily Law and Order, it seems). And the Internet, of course, which must be where he learned how to do the autopsy he performs in the first episode. Tudyk’s practiced fish-out-of-water act is cranked up to 11 on “Resident Alien,” and it’s brilliant. 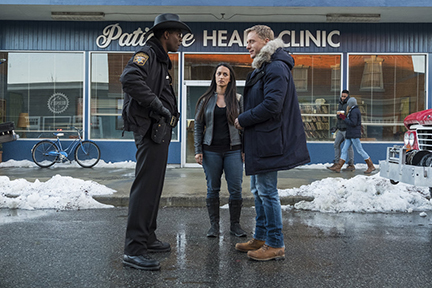 But the character him-/itself is not so likable. In the first episode, the alien brutally murders the real Dr. Vanderspeigle in order to impersonate him. He cuts a corpse’s head open to satisfy his urge to squish its brain. (Funny, yes, but still a sick impulse.) He attempts to murder a child who has seen through his disguise. And his mission, revealed at the end of the first episode, is to trigger an extinction event and wipe out humanity.

He is, despite our natural sympathy and Tudyk’s bravura performance, not a very nice man. Person. Alien. Entity. Whatever.

This is in contradistinction to the comic book version, created by writer Peter Hogan and artist Steve Parkhouse. That Vanderspeigle is entirely more sympathetic, because he’s genuinely gentle and harmless.

In the comics, the alien crash-lands on Earth not because he’s come to kill us all, but because he’s here to pick up a malfunctioning probe, whose technology the unnamed alien race doesn’t want in the hands of a “level-three civilization.”

“They appear to be an intensely warlike species,” says the alien’s boss, viewing images from the probe. “Even their imaginative works are laced with violence.”

“As is typical of level three,” responds our hero. “So they will either evolve or perish. I assume our course is one of periodic monitoring?”

Sadly for the Harry-to-be, no. The probe’s self-destruct mechanism is damaged, and he must go to Earth and manually destroy it before we uncivilized apes get our grubby mitts on it. Which is where things go awry, and he crash-lands. Now he must hide among us humans until rescue comes — if it does.

But he doesn’t kill Harry Vanderspeigle. There’s no explanation for the name in the comics so far, but it’s one the alien adopts when he rents a remote cottage on a lake in Patience, Washington. (In both TV and comics, the alien is wise enough to limit his contact with humans — until circumstances force him to become Patience’s town doctor.)

Now, a standing joke I have in these columns is that any time TV adapts a comic book series, there’s a 50/50 chance it’s going to be transformed into a police procedural. Birds gotta fly, fish gotta swim, TV gotta do homicide investigations.

But Resident Alien is unlike shows like Lucifer or Riverdale, which began in the comics as some other genre, only to become crime shows on TV. Alien was a police procedural from the get-go, with a lead character solving a homicide in his first comic book story. “As I sat down and started writing the very first script, I was immediately struck by something,” writes Hogan in the foreword to the first Resident Alien omnibus. “'This feels like a TV show,’ I thought.” Well, duh, I thought.

As the town doctor — and therefore the de facto forensics expert — Vanderspeigle is an integral part of the law enforcement structure in Patience, such as it is. Outside of his nurse, Asta Twelvetrees, his best friends are the mayor and the police chief. Each of the five completed “Resident Alien” miniseries has a mystery at its core, which due to various extenuating circumstances, Harry must solve. 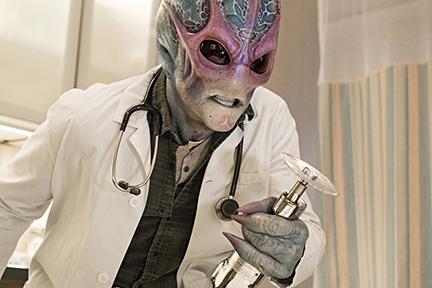 The alien Harry on TV is much scarier than the comic book version. (James Dittinger/SYFY)

Well, Harry and friends. And herein lies another difference between comics and TV: the rest of the cast. By and large, both media have introduced the same supporting characters, but on TV they are really characters. In the comics, not so much.

On TV, the sheriff is a tall, young Black man who insists on being called “Big Black.” In the comics, he’s more of the cliché version of a rural sheriff: white, middle-aged, slightly overweight, gruff but good-hearted. The mayor is similar, albeit even older and more overweight, whereas on TV he’s a brash young man.

Weirdly, Asta goes the opposite route, becoming older on TV than in the comics. Sara Tomko, the actress who portrays Asta, is thought to be in her mid-30s, whereas Asta in the comics is depicted as early twenties.

But here’s another difference: In the comics, Asta is one of the few (“one in a million”) who can see through Harry’s disguise. (The disguise in comics is actually a sort of hypnosis, as Harry seems to have some mild telekinetic and telepathic abilities. On TV, the much more alien-looking alien physically shapeshifts into Vanderspeigle.)

Asta doesn’t actually “see” the alien. Harry’s face is always a blur to Asta, and this is attributed to her being the daughter of a Native American shaman, who occasionally takes her on dream walks, where she does see Harry as he actually is. These two — Asta and her father — become Harry’s in-the-know allies, and Asta is on the verge of becoming something more.

Like on TV, there is also a child in the comics who is among the “one in a million” who sees Harry’s real face, but Harry doesn’t try to kill him. The kid is obviously a problem, but there isn’t a mean bone in the alien’s body and his instinct is to run away.

Other differences: In the comics, Harry landed three years ago, while on TV it’s only been four months. In the comics, the Men in Black — no specific agency has been named, but it’s obvious they work for a government bureaucracy — are on Harry’s trail, whereas on TV they haven’t been mentioned (yet). In the comics, Harry doesn’t drink alcohol (“It … doesn’t agree with me”), whereas the first episode of TV’s Resident Alien has an extended comedy sequence involving Harry’s first experience with whiskey.

Also, in the comics Harry left a sweetheart behind on whatever planet he’s from, and we see their bittersweet parting — it’s likely to be permanent — in various flashbacks. This may become part of the show later on, or may not. But in the comics, it certainly makes Harry easier to identify with, and feel sympathy for.

By and large, these variances are to be expected when one adapts a property from one medium to another. And Resident Alien’s creator doesn’t mind a bit. 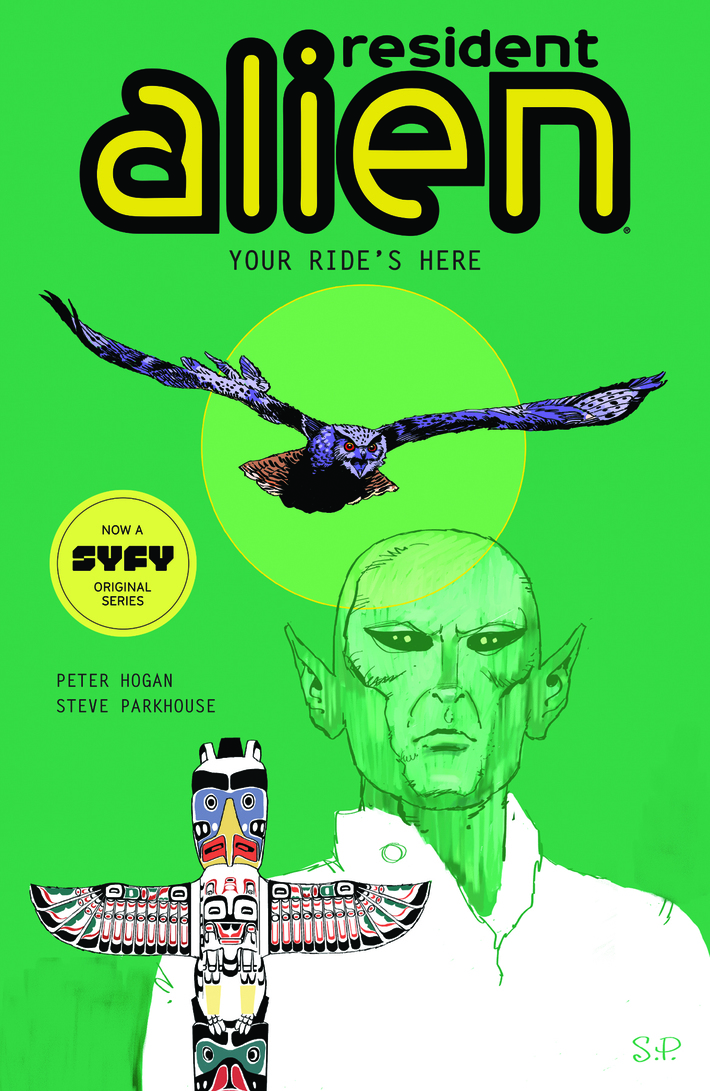 “Harry’s character develops more gradually on the show — he starts much more morally ambiguous and learns more about empathy as the story plays out,” Hogan writes in the omnibus foreword. “Whilst the comic is gently humorous, the opportunity for physical comedy (harder to pull off in a comic) is also more fully explored in the ‘small screen’ version. … I think the comics and the TV show both play to the strengths of their different mediums.”

But changes, while necessary, are not always for the better. Harry murders a man on TV, and tries to murder a child, which, for me, deserves a stronger condemnation than “morally ambiguous.” No matter what empathy Harry develops down the road, I may find him irredeemable.

But I’ll give the show time to convince me. In the meantime, there are all the wonderful comics, which I can recommend without hesitation, as they don’t require one to ignore cold-blooded murder. The first three miniseries — Welcome to Earth!, Suicide Blonde and The Sam Hain Mystery — are collected in the aforementioned omnibus, as well as in individual trade paperbacks. The next two — The Man With No Name and An Alien in New York — are also available in TPB, while the sixth — Your Ride’s Here — is still in progress, but will inevitably be collected when the last issue ships.

The print Harry may not be as funny as Alan Tudyk, but he’s a genuinely sweet guy who doesn’t want to eat, probe or murder anyone. If you’re going to have an alien doctor, that’s the kind to have.

I also watched the season finale. My DVR cut off halfway through the last scene. When it was available I rewatched the episode from the beginning On Demand.

I'm glad I did. Not only did I see the entire final scene with Res Alien's wonderful reaction but I also saw Alan Tudyk's appreciative goodbye. Even more valuable was the "5 months ago" refrigerator scene. When I saw it the first time I was confused, thinking it was the Res Alien Harry Vanderspeigle when it was the real Harry Vanderspeigle. This makes a huge difference in the story.

Yes, it does. I have a theory about WHY that happened. I won't spoil the episode for those who haven't seen it yet.

I watched the final episode last night, and I must have missed this. So go ahead and spoil me: what happened? Maybe I'll go back and watch it again.

I also watched the season finale. My DVR cut off halfway through the last scene. When it was available I rewatched the episode from the beginning On Demand.

I'm glad I did. Not only did I see the entire final scene with Res Alien's wonderful reaction but I also saw Alan Tudyk's appreciative goodbye. Even more valuable was the "5 months ago" refrigerator scene. When I saw it the first time I was confused, thinking it was the Res Alien Harry Vanderspeigle when it was the real Harry Vanderspeigle. This makes a huge difference in the story.

"So go ahead and spoil me: what happened?"

It's the same thing I was alluding to when I saud, "For those of you who were put off by the thought of the main character murdering the man whose identity he assumes, steps were taken in the final episode to ameliorate that."

"FIVE MONTHS AGO"... in the very first scene of the episode, the real Harry Vanderspeigle is revealed to be the one who killed the town's previous doctor. So "our" Harry may have killed him, but he "had it coming."

Ah, I see. Went right past me. I'll have to look at it again. Thanks!

"FIVE MONTHS AGO"... in the very first scene of the episode, the real Harry Vanderspeigle is revealed to be the one who killed the town's previous doctor. So "our" Harry may have killed him, but he "had it coming."