Producer Tomoyuki Tanaka had a problem. The film he was meant to be producing, a grand Japanese/Indonesian co-production, had fallen through, owing to a dispute with the Indonesian government. So, now he needed a film to fill the gap left by the co-production's failure. While flying home, he read the story of the Daigo Fukuryū Maru, a.k.a. Lucky Dragon 5, a Japanese tuna boat that had been caught in the fallout from the US "Castle Bravo" thermonuclear device test on Bikini Atoll, on March 1, 1954. Additionally, he was familiar with The Beast from 20,000 Fathoms (1953) and King Kong (1933), which had recently been re-released in Japan.

This all percolated in his brain and gave him the idea that he needed.

The creature in the film was originally called "G", after the English word "giant". Eventually the name "Gojira" was adopted, derived from the Japanese words gorira ("gorilla") and kujira ("whale"). It was traditionally said that "Gojira" was the nickname of a large Toho employee at the time, but this employee has never been definitely identified, and the general consensus now is that the story is apocryphal.

Selected to direct the film was Ishiro Honda, a protege of Akira Kurosawa. Honda had been through Hiroshima in 1946, and this gave him the desire to portray Godzilla's attack on Tokyo as being like that of an atomic bomb, albeit much slower.

The special effects were done by the legendary Eiji Tsuburaya, who had wanted to do a monster movie of his own, since he'd seen King Kong when he was a kid. Tsuburaya was behind the choice to use "suitmation" (i.e. having the monster portrayed by a man in a rubber suit), rather than the stop-motion he would have preferred, largely for reasons of budget and time. Tsuburaya would go on to become a legend in Japan, in particular for his part in the creation of the super-hero Ultraman.

The music was done by composer Akira Ifukube, who based much of it on the military marches he'd heard as a kid. Ifukube also created Godzilla's trademark "roar" by running a rosin-filled glove along the strings of a contrabass and then playing it back at a different speed.

Two men were hired to wear the Godzilla suit in this picture. The first was Haruo Nakajima, who would go on to play Godzilla and many other monsters until he retired in 1972. Nakajima had played a bandit in Seven Samurai, and would later play a soldier in The Hidden Fortress. Nakajima supposedly sweat off 20 pounds making the film. The second man was Katsumi Tezuka. However, Nakajima has always claimed that none of Tezuka's work made it into the film. Both Nakajima and Tezuka had small parts outside of the G-suit in the film - you can see them in the background of a scene set in a newspaper office.

The main actors in the film were Kurosawa mainstay Takashi Shimura as Dr. Yamane, the paleontologist; Akihiko Hirata (who played a samurai in Sanjuro) as Dr. Serizawa; Momoko Kochi as Emiko Yamane, the doctor's daughter; and Akira Takarada as Ogata of South Sea Salvage. We'll being seeing Takarada alot in these pictures.

If you check the scene on the party boat in the harbor, you may see in the background, sitting at a table, the uncredited Kenji Sahara (sometimes listed as Kenji "Sawara"). Sahara and Akihiko Hirata are the only actors to have appeared in the debut films of Godzilla, Mothra, Rodan and King Ghidorah.

Another member of the Kurosawa-gumi is present in the film - the old fisherman on Odo Island is played by Kokuten Kodo, who played the village elder in Seven Samurai, and who had parts in Scandal, No Regrets for Our Youth, Sanshiro Sugata, Sanshiro Sugata II, I Live in Fear, Throne of Blood and The Hidden Fortress.

At any rate, the film was a hit in Japan - an American producer saw the film in a Chinese theater in California, and the international rights were purchased. It was decided to make an "American" version of the film, and this is the version that I daresay most of you that read this will have seen. The original version has only recently been released in this country.

To Americanize the film, the producers hired Raymond Burr, who had mostly played heels up to that point, and who would soon be cast in the role that would define his life, that of peerless attorney Perry Mason. He was an interesting dude, Burr. Alot of the autobiographical information he used to give was subsequently revealed as fiction. If you ever see the 1957 classic, The Monster that Challenged the World, you may notice a character named Seaman Morty Beatty. The role is credited to "Bob Beneveds", who was sometimes credited as "Robert Beneveds", and who, as "Robert Benevides", had production credits on many episodes of Perry Mason. He was also, apparently, Burr's "longtime companion".

Burr played reporter Steve Martin (No relation!), ably assisted by Frank Iwanaga as security officer Tomo. Burr and Iwanaga were edited into the film using added footage, and were made to seem to interact with the original actors through the use of body doubles, and other trickery.

The film was released in 1956 as Godzilla, King of the Monsters, and the rest was history! As an aside - the American version of the film was apparently released in Japan as Monster King Godzilla, and the audiences found it quite funny, as apparently there was often a difference between what the Japanese-speaking characters were saying to Burr, and what Iwanaga told Burr they were saying.

Gojira (1954) is to me, the best of all of Toho's kaiju eiga. It's a very well done picture, and a powerful evocation of Japan's fear of nuclear weaponry, well made and well acted. If you haven't had a chance to see the original version, I strongly urge you to give it a look - it's well worth it. I saw it in a theater in Cambridge a few years back, and it was one of the great cinematic thrills of my life. It saddens me that alot of people judge all of the Godzilla movies by some of the later, admittedly quite goofy, ones.
I'd also particularly like to speak up for Ifukube's music in this - his score really builds up the mood of the picture.

Now, as for Godzilla, King of the Monsters...well, I loved this picture when I was a kid. Watching it now, it's painfully obvious that Burr and Iwanaga were shoehorned into it. Having watched the two films back to back, I can see that the American producers removed alot of the anti-nuclear message and pretty much all of the references to the War and the atomic bombings. The actor who suffers the most from the Americanization is Sachio Sakai, who plays a reporter named Hagiwara. His part is much more substantial in the original, and is largely cut out of the re-edited film, most of his function in the plot being taken over by Burr's character. In the end, what I think the Americanization did was make the picture much more similar to the sci-fi films that were popular in the U.S. in the 1950's - which may have been what the film needed to succeed in 50's America. The original was much darker and more poignant than the American version. There's many more scenes of Godzilla's victims in the original - no subseqent Godzilla film would ever show so much human suffering. At the end of Gojira, Shimura says something to the effect of "If nuclear tests continue, there will be more Godzillas", whereas at the end of King of the Monsters, Burr says something like, "A great man has died, but now the world can breathe freely again."

I'll close by repeating my earlier sentiment, that Gojira (1954) is to me the best of the Godzilla movies.

Next: The Quickie Sequel!

How does Godzilla pay the bills?

You'd think that one of the Godzilla remakes would have had "My name is Steve Martin," spoken straight-faced by Steve Martin, just for a gag.

His movie career hasn't been very steady since the 70s. Bob Hope had to do a lot of ads too.

My wife saw this on Amazon and showed it to me. I had to buy it! 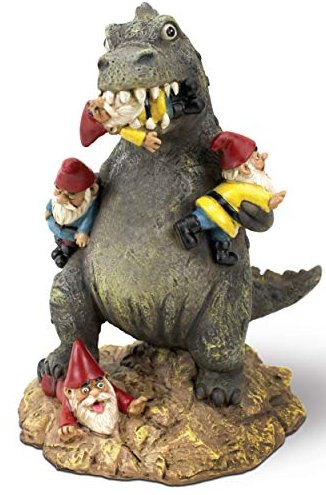 I just watched Ghidorah, the Three-Headed Monster on TPM, and man, I couldn't help think that larval Mothra is pretty much just a giant poop emoji that spits webs. All through the movie, I wanted to see her grow up and fly...!

Yeah, Larval Mothra is not my favorite Mothra.

I just watched Ghidorah, the Three-Headed Monster on TPM, and man, I couldn't help think that larval Mothra is pretty much just a giant poop emoji that spits webs. All through the movie, I wanted to see her grow up and fly...!

We bought Godzilla, King of the Monsters on DVD over the weekend.

Her response: "I don't think I'm wrong in saying that we need that."

Her response: "I don't think I'm wrong in saying that we need that."

Jeff of Earth-J replied to Cavaliere (moderator emeritus)'s discussion What are you watching right now?
"Some old Star Trek... TNG: "Where No One Has Gone Before" - First Traveler "Remember…"
44 minutes ago

Jeff of Earth-J replied to Steve W's discussion A Cover a Day
"Speaking of "that Legacy nonsense"..."
1 hour ago

ClarkKent_DC replied to Steve W's discussion A Cover a Day
"Continuing the Shang-Chi saga, Special Marvel Edition was renamed Master of Kung Fu, but kept the…"
1 hour ago

ClarkKent_DC replied to Steve W's discussion A Cover a Day
"I wanted to do Master of Kung Fu as my example of first and last issues, but I ran into a little…"
1 hour ago

The Baron replied to The Baron's discussion The List of 837 Super-Heroines
"OK."
2 hours ago

ClarkKent_DC replied to Alan M.'s discussion So, What Are You Reading These Days? (besides comics)
"I got this for Christmas. I was a bit surprised that it went for Enemy Ace over Sgt. Rock as one…"
2 hours ago

Jeff of Earth-J replied to The Baron's discussion The List of 837 Super-Heroines
"I nominate Miraclewoman (Avril Lear)."
2 hours ago

“Show them who we are.” Watch the brand-new trailer for Marvel Studios’ Black Panther: Wakanda Forever, only in theaters November 11.Get tickets now: fandang...
4 hours ago
0 Comments 0 Likes

Jeff of Earth-J replied to Captain Comics's discussion Comics Guide: Oct. 3-10, 2022
""The endless parade of first issues has, for me, gone from funny to annoying to white…"
5 hours ago

Travis Herrick (Modular Mod) replied to Alan M.'s discussion So, What Are You Reading These Days? (besides comics)
"I finished this a 2-3 weeks ago, and overall I enjoyed it. I do think it got to much into the…"
5 hours ago