Settle down, Beavis: 'Captain Hydra' will be a temporary condition

A twist ending to Marvel’s Captain America re-launch has driven a number of fans into a frenzy, some even issuing death threats to the writer. To these folks I offer four words I don’t often say: “It’s just a comic book.” 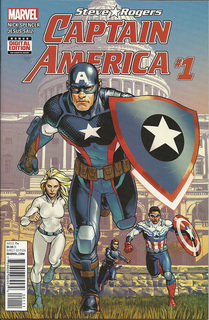 You may have heard about the controversy, which made national news. It began in Captain America: Steve Rogers #1, which shipped May 25. That title is starting over, because Steve Rogers hasn’t been Captain America for the last couple of years in the  Marvel Universe. A villain named Iron Nail negated the Super-Soldier Serum in Cap’s body in 2014, reverting him to his natural age. (Very, very old.) Sam Wilson (formerly the Falcon), has been the Star-Spangled Avenger ever since, starring in Captain America: Sam Wilson and a variety of Avengers titles.

Anyway, in a recent story too long to tell, an omnipotent Cosmic Cube – what was called a “tesseract” in the movies – was used to restore Steve Rogers to the pink of health, and to the red, white and blue of clothes. So, naturally, the newly restored Cap was instantly awarded his own title, the aforementioned Captain America: Steve Rogers. Written by the talented Nick Spencer and drawn by the dazzling Jesus Saiz, it is a truly excellent display of the comic book craft.

There’s only one hitch: Throughout the issue we see heretofore unseen flashbacks to Steve’s mother Sarah Rogers in the 1930s, where she is apparently recruited by Hydra. And in the present, Cap tosses one of his allies out of a plane, turns to a hostage and says two damning words: “Hail Hydra.”

Yikes! Has Captain America been a sleeper agent for Hydra all along? Oh, the humanity! 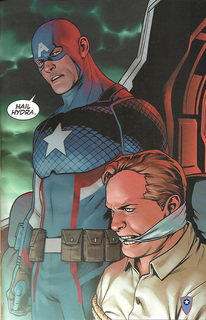 Writer Spencer, taking it all in stride, tweeted back “I can’t respond to 9000 tweets per second, but if I could, I would say I admire your passion.”

And … scene. That is the perfect response. In other words: “Settle down, Beavis. It’s just a comic book.”

The purpose of any comic book story is to arouse interest and excitement, and to encourage the reader to buy the next issue. I think Captain America: Steve Rogers #1 has succeeded in that regard.

Moreover, Captain America couldn’t have been a sleeper agent since the 1930s. If so, he certainly would have shown his true colors on any number of previous occasions, where doing so would have given Hydra control of the world. So Spencer isn’t guilty of “destroying 75 years worth of characterization.”

No, this is something new. And you know what else is new? The Cosmic Cube that re-made Steve Rogers just a few issues ago. And does anyone doubt that “re-made” included a new history, one where Cap’s mother was a Hydra agent?And does anyone doubt the Cosmic Cube, a device which might as well be stamped “Deus ex Machina,” can’t un-do what it has done?

So the Reset Button is within reach. All Spencer has to do is get from point A to point B, which is what those in the biz call “a story.”

That may or may not be Spencer’s plan; some other fix may be in the works. But you don’t have to have the writing prowess of Stan Lee to guess that “Captain Hydra” is going to be a temporary condition.

And, you know, it’s not the worst that could happen. I mean, it’s not like they killed off Captain America or anything.

Because they’ve already done that. Back in 2007, at the end of the comic book version of “Civil War,” Captain America had surrendered and was in custody. Crossbones (who is obviously not dead in the comics) took a sniper shot at the Living Legend, but it was a brainwashed Sharon Carter who delivered the furtive, final shot. And Steve “Captain America” Rogers was as dead as a 75-year-old doornail. 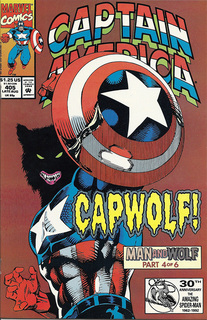 Of course, he got better.

Which is not the only terrible thing writers have done to Captain America. When you’ve been around as long as the Living Legend of World War II, writers have to stretch to find new ways to make his life miserable (and therefore interesting).

There was that time he was turned into a werewolf, back in 1992. No kidding, a villain named Nightshade injected him with a … let’s call it a Capwolf formula, and Rogers got all furry and fang-y. So did a bunch of other people, come to think of it. And several X-Men were hanging around, for some reason.

Anyway, they all got better.

There was that time that Cap quit being Cap in 1974, because he discovered that a “high government official” (everyone thinks it was Richard Nixon) was the head of the evil Secret Empire. Disillusioned, he became “Nomad, the Man Without a Country.” And there was that time in 1987 that the government ordered Cap to follow orders or quit, so he quit, and became a character named “The Captain.”

Don’t worry, he got the shield back both times.

What about “Streets of Poison” (1990), where a meth lab blew up in Cap’s face, and he spent several issues running around New York hallucinating and beating up on whoever was handy? And there was that time Cap was exiled to “Dimension Z” for 10 years, where he spent a decade leading a revolution against Arnim Zola’s mutates while raising an adopted son. That was no picnic.

But, hey, he got better.

And, you know, Captain America: Steve Rogers #1 isn’t even the first time Cap has been a Nazi. The Red Skull brainwashed Cap back in 1965, in a story by Stan Lee and Cap co-creator Jack Kirby, which featured the Star-Spangled Avenger giving a snappy Nazi salute. Dr. Faustus turned Cap into a shield-slinging Fascist in 1997, but fortunately Daredevil was around to snap him out of it.

And speaking of Stan Lee, Newsarama.com reported what he had to say about Captain Hydra at the 2016 MegaCon:

And, needless to say, a temporary one. So strap on your shields and enjoy the ride, fellow readers, without sending death threats to the writer. At least Cap’s not a werewolf this time.

That's why before having trouble with Doc Ock or the Goblin, Spider-Man would get to easily knock some random goons around.

Read Issue 2.  All I will add is that where this is going is interesting.  It looks like we are going to have to see a child die for there to be resolution.

Plus the fact that #2 had no appearance by Cap!

Permalink Reply by Rob Staeger (Grodd Mod) on July 9, 2016 at 2:05pm
I don't know about die, Mike. A cosmic cube should be able to alter reality so that it no longer can alter reality...or at least, forget that it can.

The Shaper of Worlds said he used to be a Cosmic Cube, but he couldn't bring back the dead or bring people from different dimensions to Earth, as he admitted when he made duplicates of Jarella and Crackerjack Jackson, saying he couldn't give the Hulk the real ones. So all cubes don't have the same reality altering capabilities.

It all depends on the writer and the story he's trying to tell.

The Shaper of Worlds said he used to be a Cosmic Cube, but he couldn't bring back the dead or bring people from different dimensions to Earth, as he admitted when he made duplicates of Jarella and Crackerjack Jackson, saying he couldn't give the Hulk the real ones. So all cubes don't have the same reality altering capabilities.

Maybe I was a bit on the hyperbolic side: This being is going to cease to exist in some fashion.

I don't know about die, Mike. A cosmic cube should be able to alter reality so that it no longer can alter reality...or at least, forget that it can.