For several decades now, it's been accepted comic book lore that it was Neal Adams who ended the campy era of Batman thanks to his subversive redrawing of Bob Haney's Brave & Bold scripts so that day scenes became night scenes, and Batman became darker and moodier. All those great O'Neil & Adams issues of Batman and Detective had their roots in those B&B stories. Right? Isn't that how the conventional wisdom goes? The only writer other than O'Neil that gets any credit at all for reviving the classic 1939 Batman mood to the Silver Age comics is Frank Robbins.

And yet, here's the thing: Thanks to these SHOWCASE PRESENTS: BATMAN volumes, which I've been slowly working my way through, all the available evidence points to the least likely suspect as the one who brought back the Dark Knight: Gardner Fox himself, in Detective # 374, along with artist Gil Kane (and cover artist Irv Novick). The plot itself, "Hunt for a Robin-Killer!", is pretty slight (especially for Fox), but the main point of the story is obvious. After three opening pages of somebody brutally pummeling Robin to the point of near death, rendered in Kane's patented rolling thunder from panel to panel, Batman goes on a rampage of anger to track down Robin's attacker and bring him to justice.

Here's a panel description from page 4: "In the gloomy confines of the warehouse a frightful fear stirred in the hearts of the trapped trio! For they -- and evil-doers like them -- had generated the phantom of the night -- whose very shadow struck them like a thunderclap of doom..."

Another page 4 panel: "Nerves snapped before the attack of this nightmare nemesis of the Gotham City underworld!"

Page 6: "Woe to Robin's assailant! An enraged Batman has become a terrible figure of vengeance!"

Page 8: "I've never felt such hate for any human being! I'm caught up in a compulsive vendetta!"

Here's the clincher: Detective # 374 was cover-dated April 1968. Brave & Bold # 79, Adams' first stint on the title, was cover-dated Aug-Sept 1968. Frank Robbins' first Batman story was Batman # 204, cover-dated Aug. 1968 (drawn by Irv Novick). So you can give the credit to Fox, Kane, Robbins or Novick, but it looks to me like Adams & O'Neil just perfected the moody revamping of the Dark Knight, rather than originated it.

"artist Gil Kane (and cover artist Irv Novick). The plot itself, "Hunt for a Robin-Killer!", is pretty slight (especially for Fox), but the main point of the story is obvious. After three opening pages of somebody brutally pummeling Robin to the point of near death, rendered in Kane's patented rolling thunder from panel to panel, Batman goes on a rampage of anger to track down Robin's attacker and bring him to justice."

Yeah, that sounds like Gil "high tension violence" Kane to me!  I wonder how much he "contributed" to the plot?

I didn't know about this story. There's a Golden Age one with a similar storyline, "The Case of the Honest Crook!" in Batman #5. I suppose the Joker's post-Crisis murder of Robin (Jason mk 2) was a third version.

I'd noticed myself the change in tone of the stories shortly after the Batman! TV show fell out of favor. The stories were more serious, Robin was much less quippy, and all well before O'Neil and Adams took over. 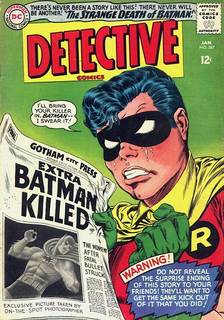 Ah, well, Robin dying, that happens. Besides, (SPOILER WARNING) he got better in this case.

Now, Batman dying is another thing. And in this case (SPOILER WARNING) he didn't get better, at least in one version. It was truly a strange death. And it even preceded the TV show by a couple months.

As I noted in my Year in Review for 1962 in this month's CBG (soon to be posted online, no doubt), the early SA was not Batman's finest hour. In 1962, fans voted Batman the comic most in need of improvement. And I don't think his "camp" period changed that perception much.

But once the TV show ended and sales started dropping again, they seemed to realize some changes were needed. I think the initial efforts Dave pointed to weren't really noticed so much, despite the turn for the more deadly.

So they shook things up with the Neal Adams covers and Detective stores, which DID get them some attention.

...I've rather thought that mid-'68 into '69-ish or so represented rather a transitional period for Batman , away from the " camp " signifiers ,(I'm inclined to think that the supposedly " horrible '66''68 ' camp ' period " wasn't quite as deep , or as horrible , as Conventional Fannish Wisdom would have it , but anyway .) and moving towards the " New Darkness/Spookiness "of O'Neil/Adams - Stories that de-emphasized supervillians , but didn't drop them entirely , Novick and the like?? tending towards a rather " dry " , perhaps , but professional art...Stories tending towards routine crooks using gimmicks and maybe slightly " trendy " refernces - a quasi-feminism story I've never read and that " Paul is dead " cash-in , which I have - sort of an approiach more like a newspaper strip , perhaps . Robbins' influence ?

I don't know, I kind of liked the Beatles/"Paul is dead" story when it appeared.  No, I wasn't able to solve it, but the solution wasn't all that surprising or difficult to figure out.  I don't recall if Batman or Robin "solved it" or came to the realization of the answer at the same time...I just don't recall. I never owned the issue, but flipped through it on the spinner rack when it came out.

Without going into it more, and by doing so, SPOILING it for others, I can't discuss it any more.

But i'd be interested in discussing it with someone who DOES have the issue or has it reprinted it or remembers it accurately.

Carmine Infantino and Murphy Anderson were a killer art force - some of those Batman and Detective covers are my favourites. I love that Detective red and yellow logo too and brings back so many memories.

...The Batgirl costume was one costume that looked convincing -and true to the comics version - on screen , which was not true of many LA manifestations of super-hero costumes in the pre-80s years .

I've thought that - all concerned ? - just Julie ? - perhaps designed it with " looking good/convincing "on 60s , tube-era , TV in mind ????????? ( I recall the movie about ,from about the same era , Jacqeline Susann ISN'T SHE GREAT saying that the cover design for " Valley Of The Dolls "was designed with a televised nifty appearance in mind !! :-) )

I always thought Batgirl's costume owed more to the Flash* than Batman with the yellow boots and insignia, the jagged cut of the cowl across the nose and see-though large eye-holes. Infantino certainly knew how to design a costume - although Gil Kane's Green Lantern comes very close.

*There should have been a Girl-Flash.

Put a girl in Wally's Kid Flash costume with her long hair pouring out the top of the mask.