Though I didn't know it at the time, Superman Family #164 (My'74) was its first issue as, due to a paper shortage and falling sales, DC combined Superman's Pal Jimmy Olsen, Superman's Girlfriend Lois Lane and Superman's Cousin Supergirl into a bi-monthly 100 Page Super Spectacular. With the trio rotating as the lead feature, they had only two new stories per year but they were better stories!

Another benefit was that they could cherry-pick the best reprints from the past fifteen years or more and bypass the sillier ones. The inaugural issue gave us Supergirl's battle with Brainiac, Krypto becoming a movie star and Perry White forcing his reporters to go on a death march!

And there was "The Three Wives of Superman!" from Lois Lane #51 (Au'74) which was, of course, an imaginary story albeit a depressing one!

It began on a Leap Year which gave Lois the right to ask Superman to marry her and without any influence by red kryptonite or magic or anything, the Man of (Once) Steel(ly-Resolve-To-Stay-Single) accepts! They quickly wed and settle in the Fortress of No-More-Solitude. But the danger of being Superman's bride is hammered home by an attempted murder so Superman concocts a "Super-serum" to give Lois all his powers. It succeeds though they are not permanent nor does she have super-vision but she can now join him in his missions and help him with his super-feats.

The lack of super-vision eats away at the Missus of Steel so she experiments with dangerous elements to gain them. Realizing that Lois is no scientific genius. Superman forbids her to continue. Soon after when her powers fade, Lois is stuck by terrible pain and secretly goes to Kandor for treatment. She is given the horrific news that Superman's serum is killing her! And nothing can save her! Lois is determined not to tell Superman to spare him the grief but writes it all down in her journal. After helping him build a bridge between North America and Europe, her powers quickly leave her and death soon comes. In her last moments, she stages an experiment with some of the dangerous elements so Superman will believe that is what killed her! In his grief after a few months of wedded bliss, Superman leaves the Earth to mourn with Supergirl (who is never seen) to protect it.

A year later, Superman leaves his "heartbreak asteroid" to visit Earth, finds Lois' journal and decides to end his exile. He mourns at Lois' tomb, inscribed "Lois Superman", and reconnects with Jimmy, Perry and Lana Lang. At the very same time, Luthor gives up crime and discovers a cure for heart disease. He begins to date Lana and after some months, proposes to her. Lana, convinced that Superman will never remarry, accepts and several weeks later, they have the wedding. For some reason, Jimmy is Luthor's best man.

As Lex and Lana are at the altar, their guest, Superman, suddenly and without any foreshadowing realizes that he does love Lana and proposes on the spot! Thinking about it for half-a-second, Lana ACCEPTS and they get married at that moment! Everyone is happy except for Luthor, naturally and vows revenge on them. (And who could blame him?) Superman then reveals to Lana that he is indeed Clark Kent, who should have been missing for at least two years now. Lana takes that bit of info with good cheer!

Superman tries to perfect the super-serum so Lana can safely take it. However, her life as "Lana Superman" hits a snag as she can't help but wonder if Superman loved Lois more and can forget her.These feelings intensify when they vacation in Kandor and is shocked when Lois shows up and kisses Superman! Actually it's really Sylvia, the Lois lookalike who married Van-Zee, Superman Kandorian double in LOIS LANE #15 (F'60) but it shakes Lana to her core.

Later Lana open's Superman's safe and finds pictures of Lois! Enraged, she leaves Superman using her personal spaceship only to be captured by Luthor! Using her as bait, the Jilted Genius plans to attack Superman with gold kryptonite which would take away his powers forever. Lana sacrifices herself to save her husband and gets zapped by a death-ray gargoyle. Superman explains to her that the "safe" was an image reproducer and the pictures were of Sylvia! But nothing can save Lana and Superman is a widower again!

Some time later, Superman learns that Lori Lemaris' husband Ronal was fatally injured protecting some whales. As he spends time with the new widow, his old feelings for her return which Lori knows instantly with her telepathy, complete with a Wayne Boring-like flashback! Consulting an Atlantean computer and seeing a good omen of some glowing eels, the two decide to marry in Atlantis! Once more, Superman brings his new bride to the Fortress, now equipped with several water tanks, and again works on the super-serum.

Soon after, the villains from the Phantom Zone attacks Lori through her mind and force to open a box containing a radioactive substance, which terminally poisons her. Before she dies, Superman realizes who was responsible! So ends Lori Superman.

Later Superman finishes the new and improved super-serum but can only produce enough for one. If he could have saved one of his wives, which one would it be?

Next: Some Pictures and comments! 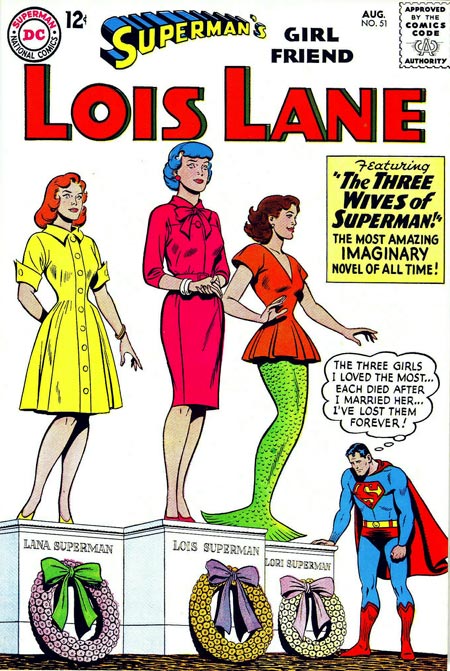 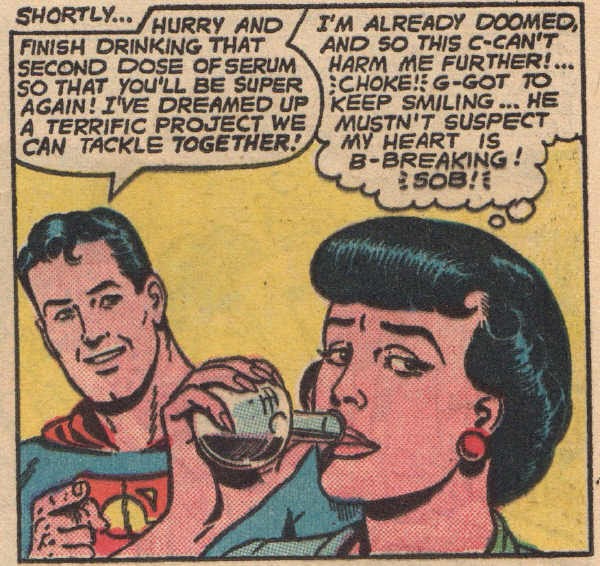 It is a nice story, albeit a dark one.  And, I think, a bit of a look into the popular mindsets of the time.

That's the tragedy at the heart of the life of the Silver Age Superman. What he really wanted to do was sculpt. But modernism was the thing and he couldn't get into art school.

His ideal was Antonio Canova.