It's supposed to start after midnight here...maybe a couple of inches. Huzzah! It's cocoa and Sky Captain night at the Beechler-Simpson home!

The airport was fine. One of my friends was on a snow plow at FedEx and said he never put the blade to the ground.

Wow we actually had a very light dusting of snow last night/early this morning. It has just about all melted, but very unusual for us.

No snow down south where I live, but the temperatures are quite chilly, especially overnight (low of 28 forecast for tonight, the first time it's dropped below freezing). I'm concerned about two stry cats I've been feeding for some time now. They come up to my door twice a day, but run if I open it and step outside. They're quite brave as long as the door is closed. They were both soaking wet when we got that rain on Monday. I set up a shelter for them, but they don't use it. 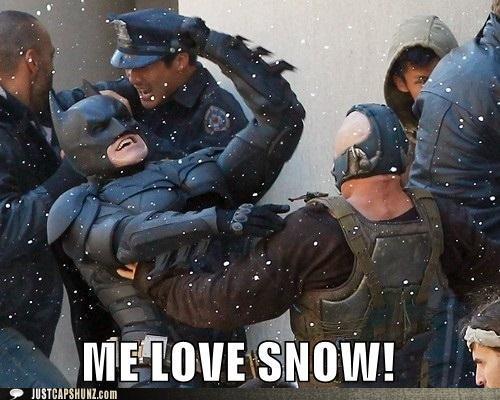 Try spreading a bed of fresh straw for them. Even if it's not in the shelter, but under the eve of the house, protected from the wind. You'll find they bed down there.

Also, I've been told that wild cats will always look for a shelter or a spot to bed that has more than one entrance/exit.

No snow down south where I live, but the temperatures are quite chilly, especially overnight (low of 28 forecast for tonight, the first time it's dropped below freezing). I'm concerned about two stry cats I've been feeding for some time now. They come up to my door twice a day, but run if I open it and step outside. They're quite brave as long as the door is closed. They were both soaking wet when we got that rain on Monday. I set up a shelter for them, but they don't use it.

It's raining like crazy here in NYC but it should be over soon. And that's better than the Blizzard of last year!

I'll try that, Kirk. Thanks for the suggestion!

Our feral cats now have two shelters: one with a larger door (albeit not two) providing more visibility, and one bed of straw. They will readily go into the new shelter if there’s food, but they never sleep there. They often nap together in a sunny spot in the open in our yard near the door after eating. We feed them twice a day. They are becoming increasingly used to my presence (they will eat with me outside in a chair less than eight feet away), but will not come closer than that, and retreat whenever I open the back door. They haven’t tried the straw bed yet at all, but the temperature has been in the upper sixties for the last week or so. I think their shelter from the rain is under a shed three or four yards down. That keeps them dry, but it won’t keep them warm when the temperatures eventually do drop.

We feed these two (a black one we’ve named “Soot” and a calico we’ve named “Cali”), but not “The Gang of Three,” led by a cat we’ve dubbed “Monster.” We had a difficult time coming to terms deciding to which cats to feed and which not to, but the Gang of Three terrorizes Soot and Cali, and they don’t come around much. There’s also a sixth cat we’ve named “Baby” (short for “Crybaby”) who comes to our back door and cries. (Obviously, there are a lot of irresponsible pet owners in our neighborhood.) I’ve tried to feed Baby, but when I open the door, she flees and doesn’t come back.

We’re going to have to do some serious thinking about how far we want to go to help these cats. Our cat, Bala, is a strictly indoor animal, and these outdoor cats drive her crazy! If we have cold snap, we’ll need to trap Soot and Cali and bring them inside. I’m not sure how that would work out. I have a friend who has a cat trap I could borrow. Maybe we won’t have a cold winter.

Fat chance, Jeff.  We've just had two bitter cold nights in Ohio...don't count on it being a mild winter.

As for live trapping the cats, you might succeed, but the cats are used to outdoors, and NOT being cooped up inside with your cat, so I suspect it won't work out...fights, terrorising, spraying, etc.

We have a similar assembly of cats that come to visit, and a similar pecking order.  One tends to dominate (usually a male) but if they are feral or wild, there's just a point where they won't come near nor allow you to come near, but they will hang out outside the door to remind you that they are there, waiting for a hand-out.  We usually respond with dry cat food in their bowl, but the freezing water becomes such a problem, that my wife bought an immersion heater (like for cattle) and plugs it in when we stay below freezing.  it works for them, but it worries me...both the safety and the power expended over time.

We still swear by just a bed of dry or fresh straw in the area where they hang out...under the eve of our house is a good one for us...and then check inside that shelter for dry conditions.  All plans for feral cat houses don't seem to stress the need for two openings, but some do it anyway. One Opening Cat Shelter article & Plans

Well, Kirk, I’m originally from the Midwest (Missouri), but I’ve been living in Texas for the past 10 years so the chances are pretty good that we will have a relatively mild winter. (Last year I had to wear a winter coat only twice.) But once each winter since we’ve been down here we have one very bad ice storm, and that’s what we’re worried about. I used to not think about it as much because several times shortly after a heavy rainstorm (what few we’ve had this year!), both cats have shown up at our back door completely dry. I think they have somewhere to go (whether it’s under our neighbor’s shed or not), but one time they both showed up sopping wet. That’s whe I started to think about the ice storms (late January, early February). I suspect on that occasion they were bullied out of their shelter by one or more of the Gang of Three.

We first started to leave food out whether we saw them or not, but we were going through food quite quickly and also who knows whether it was getting to the intended recipients or not. (On several occasions, after dark, we saw a possum eating the food we had left for the cats.) Now we feed them only when we see them, and “stand guard” when we can to keep the bigger cats from running them off. Usually my wife feeds them in the morning and I feed them in the afternoon, but yesterday she didn’t see them before she had to leave for work, so they missed breakfast. When I got home yesterday afternoon, I noticed that something had obviously curled up in the straw for the first time, but I have no idea when it happened or what it was.

Thanks for the cat shelter plans, but although I’m somewhat handy in that department, I have no tools and no workshop (mainly because there are no basements in Texas!). If we were to take the cats in, we would keep them away from our house cat and confined to the laundry room with food and a litter box for the night, and let them out in the day. But we’d probably never be able to capture them a second time. I’ve been reading about taming feral cats on the internet, and I’m hopeful they will begin to trust me more as time goes on.

No snow in sight around these parts (greater Washington, DC), which is fine by me. About this time last year, we got swamped by a fast-moving storm that bollixed up everything. The federal government and local businesses waited too late to make the call to send people home early -- so instead of thousands of commuters driving home from work before the snow came, they were all trying to go home when it was snowing at its hardest.

And, as usual, one of the three local power companies didn't have its act together. A chronic problem with snow around here is that it clumps on tree limbs and power lines, causing them to break, causing power failures in several neighborhoods that can last for multiple days. It happened at my house, but, fortunately, the power was restored after one day. Two of the three power companies called in extra help from power companies in neighboring states a day before the snow fell; the other one waited until AFTER it started -- when all those commuters were wandering around stuck. Several of their customers went up to a week with no power.

I have a co-worker who lives in my neighborhood; it took him 12 hours to get home when it usually takes one. And that's with him parking his car a mile and a half from his home and walking, which he did because our neighborhood is very hilly and there were a dozen cars stuck at the bottom of a hill on the way, unable to get to the top. I didn't even try to go home; I took the subway to work, as I usually do, but couldn't ride it back. Because of the snow, it was running underground only -- all the above-ground, outdoors portions of the lines were closed. (This ain't Chicago, where the transit system has snowplows on the trains.) At considerable expense, I checked in to the hotel next door to my workplace.

At least I could. There was a funeral scheduled for the next day at my church, and several of the deceased's relatives drove from Philadelphia, and spent all night stuck in snow on the interstate! By the time they were able to move, all they could do was drive right to the church!

Thanks for the cat shelter plans, but although I’m somewhat handy in that department, I have no tools and no workshop (mainly because there are no basements in Texas!).

We have basements in Texas just not in this part of Texas. It mainly has to do with the soil in the area.