I picked up the first issue of Steve Rogers Captain America today out of curiosity and I have to say it completely caught me off guard.

I generally have a pretty high tolerance for hype, gimmicks, and attempts to stir up controversey or get attention. I can understand it to a certain degree. The comic book marketplace has gone through some massive changes over the years and it's tough to create enough of a buzz to get readers to take notice. But despite all of that, I just thought this story was ridiculous.

The twist here is that Steve Rogers is, and always was, a Hydra agent going back to his childhood. It's apparently not a hoax, or a trick, or mind control or anything else. We even get flashbacks from Steve's childhood to further convince us. And Tom Brevoort has said that it's not a trick or imaginary story.  For some reason, I've finally reached my exhaustion point with this stuff. Not that I'm angry or upset or anything. I'm just having trouble finding a reason to stay invested. And I feel like, if this turns out to be true, it does irreparable harm to the character. Cap is maybe the one Marvel character that you just can't do this type of thing with because his one defining quality was his unassailable character. And additionally, even if it turns out to be a misdirect, the whole thing just reeks of desperation and shortsightedness.

I actually saw a TV news story on this today!

The last time they had a non-movie news story about Captain America was when he was assassinated and the news media thought that Marvel was a bunch of Commies.

Tom Brevoort: "We knew it would be like slapping people in the face. [...] The idea of Captain America means something very primal and very strong to the people of this nation, and they have a very visceral reaction when you get to something like that. You want people to feel and react to your story. So far, so good."

Because slapping people in the face is good! Who needs villains? Let's have another Civil War, only this time we'll make Cap the baddy!

They've only just got Steve back in the uniform - what's he going to do now? Public ally burn it?

I can't help but urge caution.

The Peter Parker replaced by Doc Ock and dead forever plot went from controversial to an interesting idea so......

But then there's Tony Stark' brother is the clever - and blood - Stark idea.... 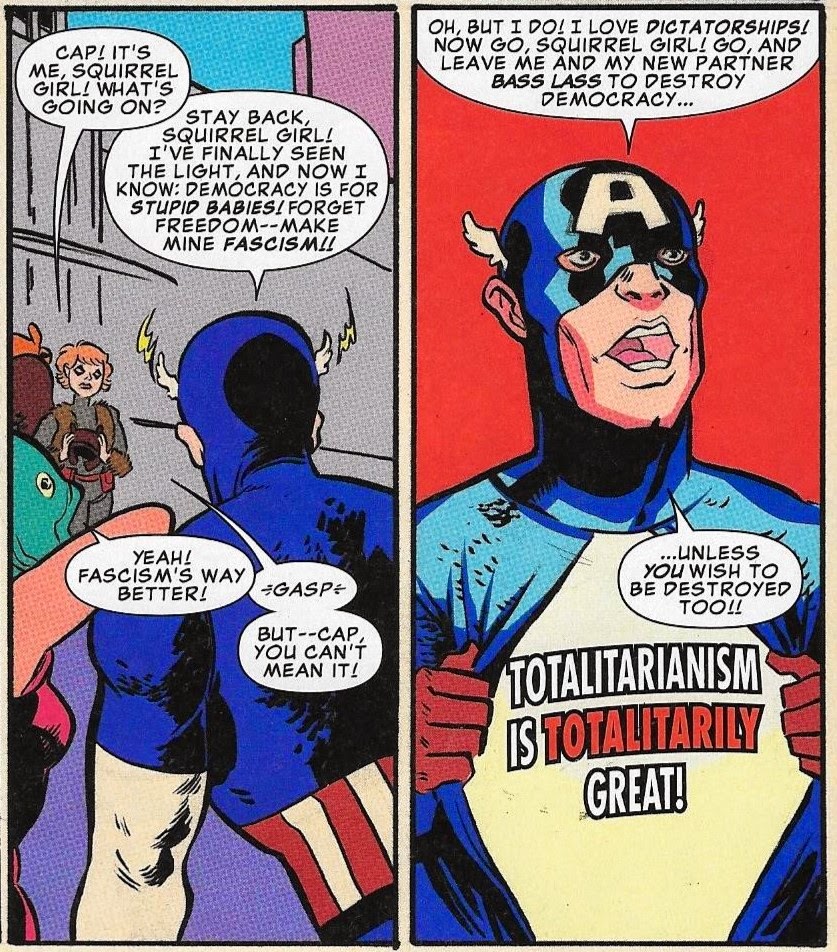 I had been looking forward to this particular comic book for weeks now. I got to my LCS yesterday only to discover Diamond had shorted them their entire order. Replacement copies will arrive Friday. I figured I could wait. Then Bob sent an e-mail telling me to avoid the internet until I read it. I decided to go to my back-up shop. When the clerk handed it to me he said, “You’ll hate it.” I read it very slowly and very deeply, impressed throughout with how well-written it was. Then I got to the shock ending.

My impression: “What did I just read?”

Are they saying that Captain America is a Hydra sleeper agent… and always has been?

No. No way. There must be something else going on. Either he’s being mind-controlled, or it’s not really Steve Rogers, or something. In which case, meh. Either that, or Secret Wars has so radically altered the very substance of the Marvel Universe so as to render it virtually unrecognizable. In which case, again, meh. I’ve read the posts above which indicate this direction is not a hoax, a dream, an imaginary tale, but I just can’t believe that. I haven’t felt this apprehensive since it looked as if Ed Brubaker was bringing back Bucky. But this move, if taken as face value, is worse than that. It’s as wrong-headed as the Illuminati ret-con. If Cap was a sleeper agent all along, why come out now, on this relatively low-importance mission. Surely there were other more logical opportunities to have done so, if he was going to, in the last 52 years. In the last 75 years.

Another problem: wasn’t Hydra conceived by Baron Strucker after the fall of Nazi Germany? How could it have existed back in the 1920s?

I’m going to try to keep an open mind. I’m going to wait to see how the story unfolds. But if it turns out that Steve Rogers is a Hydra agent in this bizarre new world (not on Earth-J, never on Earth-J), then Sam Wilson is Captain America and Steve Rogers simply retired.

I''ll say up-front: I haven't read it. But, if Steve Rogers  has always been with HYDRA, then why haven't they conquered the world by now? I mean, I'm no expert on Cap's continuity, but surely there have been a number of occasions that he could have handed him the world on a silver platter if he was secretly on their side?

No, there has to be an as-yet-unrevealed gimmick to this.

I agree completely (on both points).

Disclaimer:  I stopped reading new comics almost completely 20+ years ago.  I follow the news and kinda keep abreast of major developments in major characters' storylines, but my buying and reading is and for a long, long time time has been pretty much exclusively devoted to "stories written before the mid-70's."  So I am completely and utterly unqualified in every conceivable way to comment critically on anything happening in current comics.

Which I will now proceed to do anyway.

Having read the new stories and seen the (limited number of) panels reproduced online, and read the comments from Brevoort and others, it seems to me that one of two things is going on:

1.  Marvel is choosing to tell an incredibly wrong-headed and offensive story, with the specific intention of creating controversy and outraging a certain segment of fandom, just to get people talking, stir up some news coverage and (hopefully) generate some sales.

OR (and more likely):

2.  Marvel is pretending that it is telling an incredibly wrong-headed and offensive story, and sending out Brevoort and other to sell that pretense to readers with "no, really, this is exactly what it looks like" statements, with the specific intention of creating controversy and outraging a certain segment of fandom, just to get people talking, stir up some news coverage and (hopefully) generate some sales.

Either one of those scenarios makes me sad, with an extra level of sadness that I can't completely rule out the possibility that #1 is what's actually happening.

I'm now going back to swimming in the Nostalgia Pool.

I agree with everything you said, too.

After reading some more quotes from Brevoort and Spencer, I'm re-thinking this a little bit.

Every single month whether it’s a run of the mill month for Captain America or an extraordinary month, our job is to put him in situations that place that character under some degree of pressure and see how he reacts to that. And hopefully our readers are surprised, shocked, elated, see something of themselves, learn something about themselves. To say it’s a gimmick implies that it’s done heedlessly just to shock. The proof is always going to be in the execution. So you’ll have to read the rest of the story to see.

But I certainly believe it’s not a gimmick. It’s a story that we spent a long time on, that’s compelling and captures the zeitgeist of the world. It will make readers wonder how the heck we’ll get out of this.

It’s a big part of our story, what Steve’s beliefs are about what Hydra should be, where it should go, what it should focus on. To me, I always get really fascinated by this kind of thing. Any World War II history buff can talk your ear off about the internal power struggles of the Nazi Party. There were some fun parallels to play with here. There’s also a little bit of The Man in the High Castle here. It’s a difficult challenge to get people invested in Hydra characters because their ideology is so repugnant, but what The Man in the High Castle did so well was get you to pull for the lesser of the evils. You might be seeing some similar things here.

So now I'm thinking double agent. Cap was always pretending to go along with Hydra in order to change it from within.  Dumb idea but still a little more plausible as a ret-con. What Spencer does to sell the illusion that Cap works for Hydra in those final pages is having him APPEAR to kill Jack Flag with the dialogue specifically tailored to further convince us, and then have him utter the phrase "Hail Hydra" in front of a witness. Of course, he may just need the witness to believe he's working for Hydra. The confirmation will come next issue when we find out if Jack Flag is dead or not.

As another member who isn't actually reading the Marvel books anymore, I think it's also a stunt, like when DC killed Superman, etc, and said or implied he was really gone.

As for Hydra, my Hydra (on Earth RW?) was started in the Pacific by Baron Strucker and discovered by Captain Savage. The concept they are likely following is the SHIELD TV show idea that Hydra is an ancient organization.

Jeff of Earth-J replied to The Baron's discussion Movies I Have Seen Lately
"Oh, absolutely. "
12 minutes ago

Jeff of Earth-J replied to Jeff of Earth-J's discussion Shaolin Cowboy
""This issue didn't really tell me much about who he is... Do the…"
17 minutes ago

Philip Portelli replied to Randy Jackson's discussion Did Paste Pot Pete/the Trapster ever admire Spider-Man's Webs?
"They did with the Wizard and Sandman in Marvel Team Up #2 (My'72). Did they meet…"
26 minutes ago

The Baron replied to The Baron's discussion Movies I Have Seen Lately
"Now you make me want to break out Soup to Nuts again.  My impression has always been…"
59 minutes ago

Jeff of Earth-J replied to The Baron's discussion Movies I Have Seen Lately
"THE THREE STOOGES: After watching the Leonard Maltin documentary "The Lost Stooges" last…"
1 hour ago

Jeff of Earth-J replied to Jeff of Earth-J's discussion Sandman (TV)
"That was in the first episode (besides, I saw an ad in a comic book and pretty much figured out who…"
1 hour ago

Mark Sullivan (Vertiginous Mod) replied to Jeff of Earth-J's discussion Sandman (TV)
"I've seen seven of the episodes (I think). Very impressed with the visuals and the…"
1 hour ago

Peter Wrexham replied to Steve W's discussion A Cover a Day
"What about a carnival of carnage?"
2 hours ago

Dave Palmer replied to Steve W's discussion A Cover a Day
"Does a carnival of fools count?"
3 hours ago