Iron Man 3 is premiering across the U.S. May 2 and May 3, and has already made bunches of money overseas. Below you'll find some of the PR sent to Captain Comics, especially a ton of videos. After plowing through all that, I hope Legionnaires will post their responses to the movie. Onward! 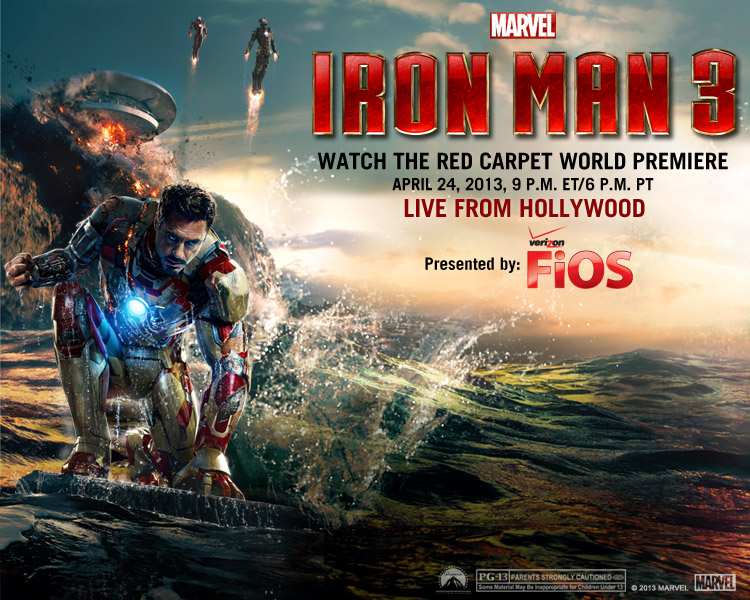 Marvel proudly invites one and all to experience the World Premiere of the Marvel Studios’ film MARVEL’S IRON MAN 3, LIVE from Hollywood! On April 24, 2013 at 6:00 PM PT/9:00 PM ET, click over to  verizon.com/ironman3redcarpet and watch as the stars arrive at the legendary El Capitan Theatre!

Sponsored by Verizon FiOS, this LIVE event will get you up close and personal with IRON MAN 3 like nothing else can!

Don’t miss a minute of the action on verizon.com/ironman3 red carpet.

Actor Robert Downey, Jr., along with executives from Marvel Entertainment, LLC, will visit the New York Stock Exchange on April 30 and ring The Opening Bell® to highlight the U.S. release of Marvel’s highly anticipated film, “Iron Man 3,” on May 3. 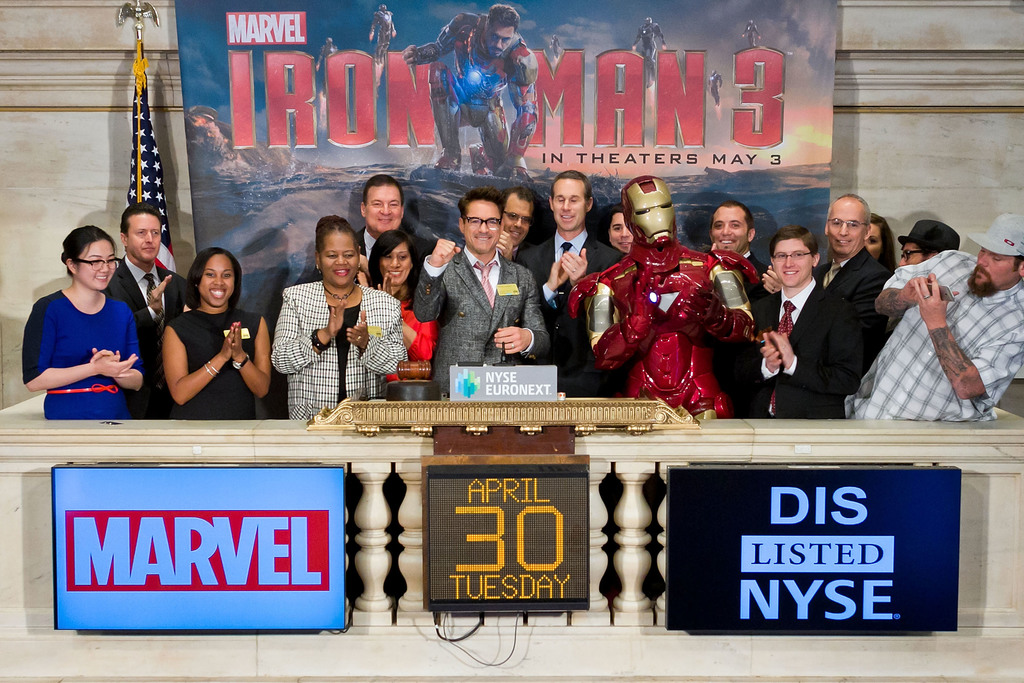 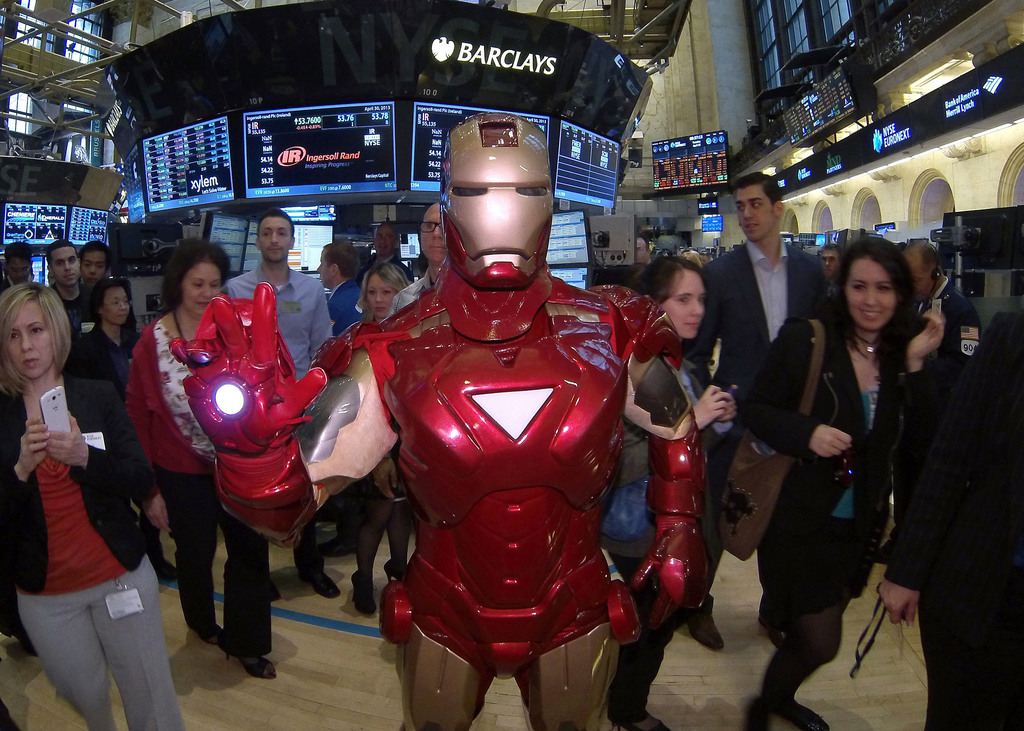 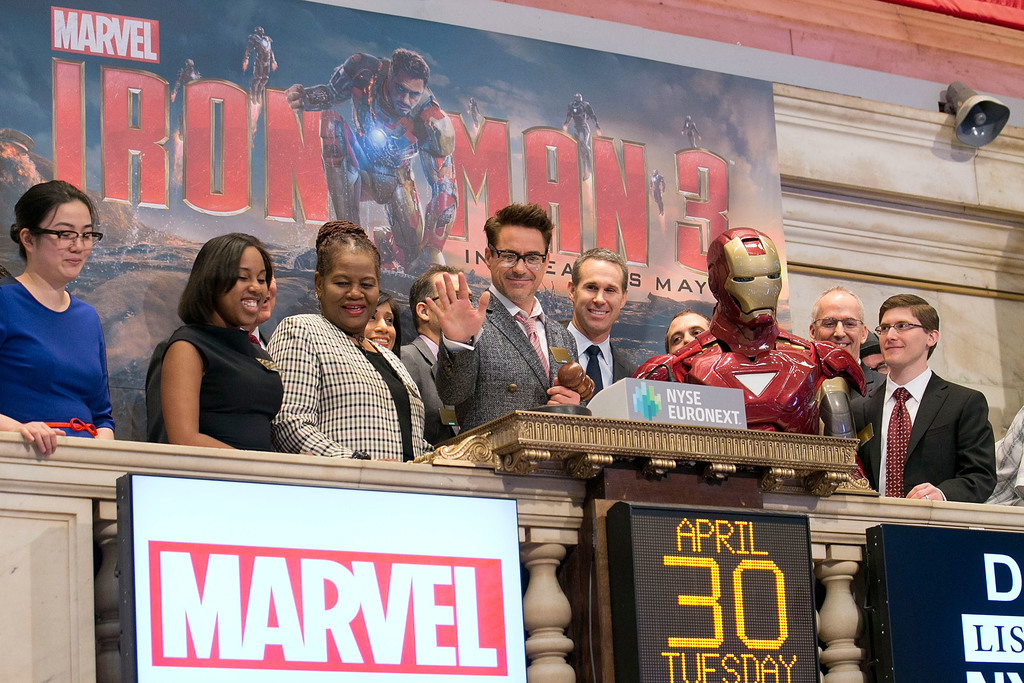 May, 1, 2013 - New York, NY  ComiXology, the revolutionary digital comics platform, polled over 5,700 of their customer for the comiXology comiX index  an inside scoop on what die hard comic fans are saying, thinking and predicting. Iron Man 3 premieres this Friday, May 3rd  see below for what the die hards think. Do you agree? Disagree? Dont know? Spend some time reading the comics that inspired the film and find out for yourself!

1. What is the best Iron Man movie so far: the original Iron Man or Iron Man 2?

2. Beside Tony Stark and Col. Rhodes, what character is most likely to sport an Iron Man suit in Iron Man 3?

3. Will Iron Man 3 be the summers biggest-grossing comics-related film?

58% say YES  bigger than Man of Steel, Kick-Ass 2, The Wolverine, and Star Trek Into Darkness

4. What is the best Iron Man suit?

5. Who would comiXology fans rather see piloting an Iron Man suit?

Just got back from watching the new Iron Man 3 movie in the theater with the Mrs. and son, and my daughter had gone to the Thursday night midnight release.

I enjoyed it, and found it a curious mix of Iron Man, 007, Transformers, GI Joes, and Mission Impossible.

I won't give away anything critical here, at the risk of ruining some reveals and spoilers, but it was an interesting take on the Mandarin, with a healthy mix of SHIELD, a reference or two to the Avengers movie, the Thor movie, and the Hulk, but you have no need to have seen any of those movies to understand or enjoy this one.

Chronologically, this movie must follow the Avengers movie, due to some references to "the events in New York"  but it's enough to know that Tony went through a climatic battle there.

Of course, there were several red herrings thrown in, and I was a little surprised when I thought I recognized Madam Macabre, Michael, and AIM alluded to or paraded by, but when none of them materialized, I realized my comic fan sense was working too hard to spot connections and interpretations.

If the Iron Man movies were conceived as a trilogy, then this movie wraps it up quite nicely, but we are left wondering if the next Avengers movie is going to include Iron Man.... or if Nick Fury or Captain America will be convening a NEW set of avengers.

I was very pleased to see acknowledgement of Stan Lee, Don Heck, Larry Lieber, and Jack Kirby.  There was no mention of Steve Ditko, if he was in fact responsible for the redesign to the "modern" armor.  Also a shout out to Josh Weddon...

What are your thoughts, without giving away any spoilers?

Thoroughly enjoyable film.  I did get a huge kick out of the Mandarin characterization.

I was surprised to see less SHIELD reference, considering how big a role the organization played in Captain America and The Avengers.

And I do think this is the loudest movie I have seen in quite a while.

A headline I saw somewhere online (for a review I didn't read) kinda summed it up for me: "Iron Man 3 is a romantic comedy hidden inside a superhero movie."

Since I didn't read the review, I don't know if the reviewer thought that was a good thing or a bad thing, but it brought a smile to my lips. Because I've always maintained that Stan Lee's true genius was that he had the brilliant idea -- whether he realized it or not -- to use superheroes not as a genre, but as a delivery device to tell every kind of story there is. Primarily, and most famously, he used superheroes to tell soap operas. But he also did horror stories, situation comedies, coming-of-age tales, big monster stories and so forth. And if the movies carry that idea forward, they should be just as successful in this medium as Lee & Co. were in comics in the 1960s.

I thoroughly enjoyed Iron Man 3. I don't recall any point that I actually laughed out loud -- it moved too fast for that -- but I was pretty much smiling (or gritting my teeth and squeezing the armrest) throughout.

Good to see Rhodey get more to do -- and show why he's there.

Good to see AIM introduced to the Marvel movie universe. They're a pretty useful plot device.

Good to see Killian, Maya and Extremis -- all recognizable from the "Extremis" storyline.

And especially good to see a take on The Mandarin that make him something other than a Fu Manchu knock-off.

I saw Iron Man 3 on Friday night. Some thoughts:

I have to say, overall, I liked this a bit less than the first two. Compared to them, it seemed a bit grim and glum -- oddly enough, it seemed so as it was trying to top those two in can-you-believe-what-you-just-saw spectacle (Air Force One -- WOW!). But overall, it's a good movie, and well worth it in its own right, unlike Iron Man 2, which seemed too much like a setup for The Avengers movie.

Yes, i agree that Robert Downey Jr. has made his mark and indelibly, Tony Stark will be him just as Sean Conrey originated the role of James Bond and will always be identified as him.

Your daughter's mistaken; there's only been one Pepper Potts, and that's Gwyneth Paltrow in all three Iron Man movies and The Avengers movie.

Terrence Howard was Jim Rhodes in the first Iron Man movie. Oddly enough, he was the first actor signed, and the highest paid; at the time, he was hot because of his Oscar nomination for Hustle and Flow. But director Jon Favreau wasn't that thrilled with his performance, and, well, Robert Downey is the star of the franchise. Once Iron Man became a hit and they readied a sequel, they offered Howard a pay cut -- 40 percent, take it or leave it. Then they didn't give him time to accept or decline.

The name you're looking for is "Jim Wilson."

I saw the movie Friday night and loved it. I'm not sure I liked it better than the first. I did like it a lot more than the second one. Iron Man 2 to me made Tony and Pepper more unlikable. Iron Man 3 rebounded and made them slightly more down to earth. Also it was good that Don Cheadle had more to do. True, he was in the beginning and then at the end but it was good to see him kick butt without using the uniform.

I liked the twists this one had. I'm a huge Guy Pierce fan was happy to see him put Tony through the ringer.

This one had a new director, Shane Black. Black has a background in action buddy comedies such as Kiss Kiss Bang Bang (check this one if you haven't seen it) . He also wrote the screenplay for the first Lethal Weapon and the Last Boy Scout. This movie at times felt like one of those which I liked.

I have read a lot of the modern Iron Man comics. I read Extremis which is a good story but extremis in the book is different than in the movie but that's ok. I did read some of the Cival War stuff and about his time as director of SHIELD. The majority of my Iron Man experience was Matt Fraction's run that recently wrapped up. This had the feel of all of those. SPOILER- it was cool seeing all the different Iron Man armors in action. I Think I even saw his newest yellow and black armor.

I just (finally) saw Iron Man 3. My wife and I and the couple we were with all really enjoyed it.

Don Cheadle played Rhodey in Iron Man 2, also. I agree he was a big improvement over Terrence Howard.

I'm not familiar with the Extremis storyline. I thought it was really strong, and loved the take on the Mandarin. Guy Pearce and Rebecca Hall were great, as were the more prominent Extremis minions. Ben Kingsley can do no wrong. He has tremendous range as an actor, as do Downey, Cheadle, and Pearce.

As for Gwyneth Paltrow, she's always been pretty but I think they did her a disservice when they named her Most Beautiful Woman. She's never been that, and at 40 is noticably less pretty (as are the rest of us as we age). If you get a chance to see the movie Hook, she plays the version of Wendy Darling who makes Peter decide that growing up might not be so bad. She was 18/19 at the time, playing a younger girl, and was something to see.

Permalink Reply by Jason Marconnet (Pint sized mod) on May 22, 2013 at 2:48pm
I agree. The original Extemis storyline was very good and my official introduction to shell head.