The Adventures of Tintin

It has been five months since I bought The Adventures of Tintin Complete Collection box set, but I’ve only just started reading it. The delay was due to the first story, “TINTIN IN THE LAND OF THE SOVIETS” (first serialized 1929-30). Hergé‘s style is simple, here it looks rough. (It reminded me a bit of Art Spiegelman’s Maus.) Hergé himself must not have cared for it, either, because he blocked its publication until 1973. It was colorized in 2017, but is presented here in the original black & white. Now that I’ve read that first story I intend to read the rest, so I thought I’d start a discussion here. (Who knows? I may even stick to it.) We have already determined (in “Your Favorite Things of the Year” when I first posted about it in October) that the controversial “Tintin in the Congo” is not included in the set, so next up is “Tintin in America.”

Today is Herge's birthday, by the way!

I made it my "daily holiday" sign for work. Every day I would post a sign with that day's "National ____ Day", and on days where I don't want to draw anything for that National Day, I just choose something else, like a Day in History or a famous birthday.

I don't normally like to draw someone else's style, because you really just have to kind of copy it, but here it is:

'Ive done a quick check  - apparently, Herge did his best to make up for his depiction of Africans in Congo, but still was criticized as racist, which he found depressing.

I've done a quick check  - apparently, Herge did his best to make for his depiction of Africans in Congo, but still was criticized as racist, which he found depressing.

This may well be the Tintin story that most references previous tales. The plot, too, is more ambitious than we have seen before from Herge.

I have no issue with any depictions in the book, but I wonder if there was any real life inspiration for the plot element of current day slavery in Makkah.  It was intriguing, and I wish the resolution was a better elaborated and more of it happened on panel than it did.

RED SEA SHARKS: I read only this one Tintin story over the weekend. (I think now that I'm getting toward the end I'm slowing down to make it last.) It's another one of those stories with a very pedestrian beginning (General Alcazar reappears out of the blue, loses his wallet, and Titntin tries to return it to him), but leads to intrigue. Lots of returning characters. It was surprised to see a reference to rock and roll, but we are up to 1956-58 now. I don't think I would have been as forgiving to a rescued pilot who had just made a strafing run at me on the open sea, but Skut turned out to be a pretty good guy. This story features (among many other things) Muslim negroes, a even-handed portrayal I thought, being tricked into slavery.What can you tell me about it from behind the scenes?

That was the first Tintin I ever read. Only later did I realize the amusing nature of its Bianca Castafiore cameo.

TINTIN IN TIBET: This one is fairly straightforward (as Tintin adventures go): Tintin and Captain Haddock are on vacation when Tintin has a dream that his friend Chang is in

It's one of the first ones I remember reading.   I always loved Professor Calculus' non-reaction here: 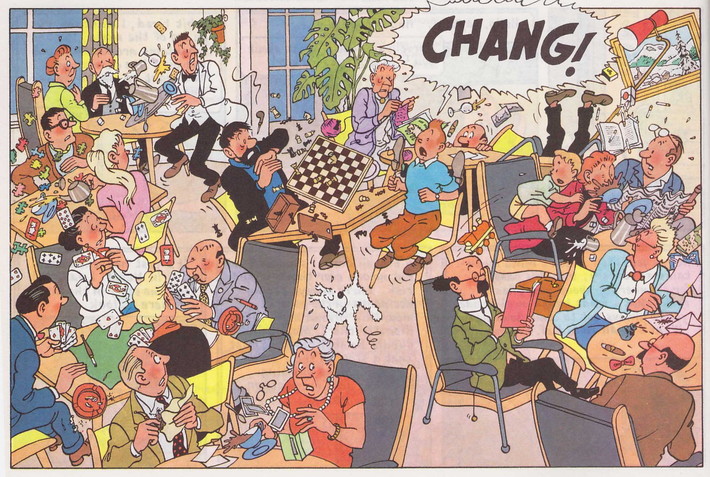 I have finished up this box.

THE CASTAFIORE EMERALD: I took an unscheduled break from this project after Tintin in Tibet, but I'm back now. this story is much more character-driven than most Tintin stories, and takes place entirely at Marlinspike Hall.

FLIGHT #714 TO SYDNEY: Back to action/adventure and exotic locations with this one, as Tintin and company are hijacked to a volcanic island, with ancient ruin and even aliens.

TINTIN AND THE PICAROS: "Picaro" is the Spanish word for rogue; in literature, it is a flawed hero in a picaresque novel; in this story, it is a group of guerrillas led by General Alcazar against General Tapioca. this one is full of political intrigue and follows on, more or less, from The Castafiore Emerald.

TINTIN AND ALPH-ART: This is the one Herge was working on when he died, and is presented in script form with breakdowns. I have no desire or intention to read it at the present time, but I no doubt will the next time I work my way through this set (which won't be anytime soon, but the in the future definitely).

Note to Captain Comics: You haven't posted a comment here since I first started this discussion back in March. At that time, you were on the fence about reading Tintin or not. I hope this discussion has helped make up your mind (not what I said so much, but what Bob and others have said). For what it's worth, I think you should read it. In other circumstances, I might be reluctant to advise someone to go out and buy this set, but you already own it. All you have to do is read it. I liked it to begin with, but I found myself enjoying it more as I went along. that's why I fully intend to read it again at some point in the future, now that I have an idea of where the overall narrative is going.