The Earth-44 Timeline, Appendix Four: The Legacy of Spider-Man

We begin in 1895, when May Reilly, herself an ancestor of Peter Parker, used her advanced inventing skills to become the "science hero" Lady Spider. There were other spider-themed crimefighters during the early Twentieth Century, including the Spider (Richard Wentworth), who debuted in 1933, and the Tarantula (Jonathan Law), who debuted in 1941. Law was a prominent member of the All-Star Squadron, and inspired the much-later vigilante Tarantula II (Catalina Flores), who debuted in 2002.

It is unknown to what extent, if any, these earlier heroes inspired Peter Parker, although the Silver Spider (Tommy Troy), who first appeared in 1954, was known to have claimed publicly at least once that he felt Spider-Man had imitated him.

It is possible that Peter Parker, born in 1946, was aware of the careers of all of these predecessors, although he seems to have been unaware of his relationship to May Reilly.

At any rate, it was in 1962 that Parker became the original Spider-Man. He was something of a controversial figure in the early years of his career, owing especially to the persistent enmity of Daily Bugle publisher J. Jonah Jameson. This was not helped by the 1965 arrival of the mastermind known as the Spider II, who worked both sides of the law, and with whom Spider-Man was said (erroneously) to be affiliated.

Parker's life took a turn for the better in 1971, when he married Mary Jane Watson. The couple had three children together, May (born 1973), and the twins Peter Junior and Mary Jane the Younger (born 1980). For reasons unknown, May and Peter Junior would later develop super-powers similar to their father's, but the younger Mary Jane would not.

Other spider-themed heroes continued to appear, including Spider-Woman (Jessica Drew) in 1977 and Spider-Man II (Yamashiro Takuya) in 1978. In 1983, in an extra-dimensional realm inhabited by anthropomorphic animals, Peter Porker became Spider-Ham. Spider-Woman II (Julia Carpenter) debuted in 1984.

May Parker entered the "family business" in 1989, becoming Spider-Girl (She would change her codename to Spider-Woman III in 1994). Her siblings followed suit in 1996, Peter Junior becoming Spider-Boy (He would switch to Spider-Man III in 2001), and the younger Mary Jane (who had obtained an alien bio-ring) becoming the Insect Queen.

The year 2004 saw the debut of two more heroes, Spider-Man J (Sho Amano) in Japan and Araña (Anya Corazon). They were joined in 2005 by the Indian hero Spider-Man IV (Pavitr Prabakhar).

While little is currently known of the subsequent fates of the Parker family and their friends, it is known that their legacy lived on until at least 2099, when Miguel O'Hara became Spider-Man VI.

Oh, yeah, I forgot about her.

Marrying Mary Jane in 1971 would mean Gwen Stacy was still alive at the time. So their break up over the recent death of Captain Stacy was permanent? Where did the teenage Gwen Stacy of 2014 come from?

The Spider II or Spider Spry was the arch-nemesis of the Fly/Fly-Man. 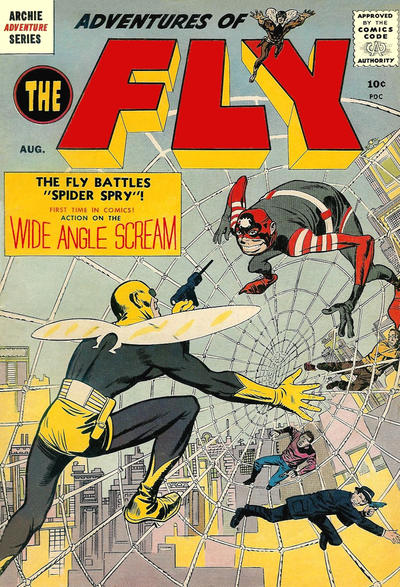 Found him. By Jack Kirby. Could that be the character he tried to push at Marvel?

Why were so many Archie villains fat?

Marrying Mary Jane in 1971 would mean Gwen Stacy was still alive at the time. So their break up over the recent death of Captain Stacy was permanent?

Sure, why not?   ;)  The truth is, apart from the first half dozen or so that I later read in reprints, I've never read any Silver Age Spider-Man stories.  The first Spider-Man comic I ever read was The Amazing Spider-Man #162 (November 1976).  So, I have very little knowledge of early Spider-Man continuity. Thus, when I drew up the timeline initially, I gave very little thought to what might have happened to the Silver Age Gwen Stacy. (A proper Spidey fan would have done it differently, I'm sure.) I think we have to assume that the break-up you mention (or something like it) occurred, and that consequently Gwen went on to have a nice long, happy life that didn't involve getting killed at a young age.  Perhaps she comes and visits the Parkers occasionally, and thinks about what might have been.

Where did the teenage Gwen Stacy of 2014 come from?

I'm a big fan of the Spider-Gwen book, so that Gwen Stacy of 2014 is based on her. I don't know how similar modern Gwen is to Silver Age Gwen - I suspect not much. As far as Earth-44 continuity goes, 2014 Gwen is a younger cousin (once or twice removed) of Silver Age Gwen, who just happens to have the same name. (I figure that's possible. I'm called Bob, and I've got cousins called Bob on both sides of my family.)

I remember that story. Not a personal favorite of mine, but I gather some people liked it.

The character I was thinking of for "The Spider II"  was actually a British character, published by IPC Magazines, and first appeared in the June 26th, 1965 issue of Lion.  He was a criminal mastermind who fought other criminals as often as he did the law.  He liked fighting crooks so much that he ended up doing it full-time, becoming a hero by default.   The character was later re-visited in Jack Staff and Albion.  This is him below: 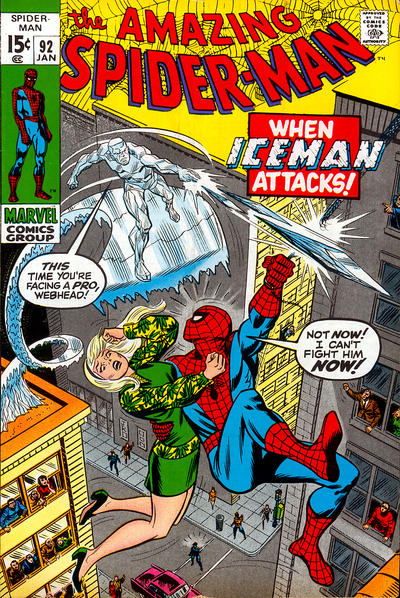 Well, he is a pretty cool guy.

Updated to add the Spiderling.