Last year (or maybe two years ago...time flies) I tried to start up a reading club, trying to get everyone to read the same set of Commissioner Gordon stories along with me. It failed, and understandably so, since not everyone probably had the same issues at hand at the given time.

Well, this year, I'm taking a different route. I'm going to try each day to write about a different single issue (or maybe trade--I don't want to box myself in so early in the game) about a facial-haired comic book character. I just thought it would be fun to start a theme for the month, like I did last year with the Spooktacular Comics for October.

Feel free to chime in with your own comics if and when you feel inspired!

Aquaman #0: Back in 1994, right after Zero Hour (or maybe coinciding with, hard to recall), DC put out a zero issue for every comic they had, as a kind of reboot. This was, in today’s world, and extremely soft reboot. In fact, I think the only thing affected by it were the Legion books. There was no renumbering at all. Once the zero issues were done, they went right back to their original numbering.

This particular issue could have really just been issue #3 of the new Aquaman series by Peter David. It featured the newly bearded and mustached Aquaman. It starts off just after his hand was chewed off by piranhas. He is being dragged, alongside his longtime partner in crimefighting, Gar, by Dolphin, to Atlantis, where he can receive the medical attention one would need after having one’s hand gnawed off.

I like how humor was added into the Aquaman world. This is probably the best take on him in comics, and it goes perfectly alongside the nice characterization in the movie, and by far the best ever (in my opinion) writing done for the character from the Brave and the Bold cartoon.

While he is down for the count, being worked on by Atlantis’s finest reconstructive surgeons, he relives a nightmarish version of his past, recounting such highlights as Mera (with whom he seems to have had a recent bout), his boy who was killed, and other horror-tinged memories.

When Dolphin and Gar (who is feeling better at this point) check on him, he brandishes his new “hand”--not a hand at all, but a whaling harpoon--with a big ol’ grin on his face. Way to make lemonade with the lemons life, uh, handed to you, Aquaman! You earned an “attaboy” as well as a spot in the Movember comic book flashback!

One thing I forgot to mention is the artwork of Martin Egeland. I can't believe we haven't heard more from him in the last 25 years. His work could have easily evolved into him becoming the next Art Adams. The art was certainly evocative of Adams. I can't imagine what it would look like today. 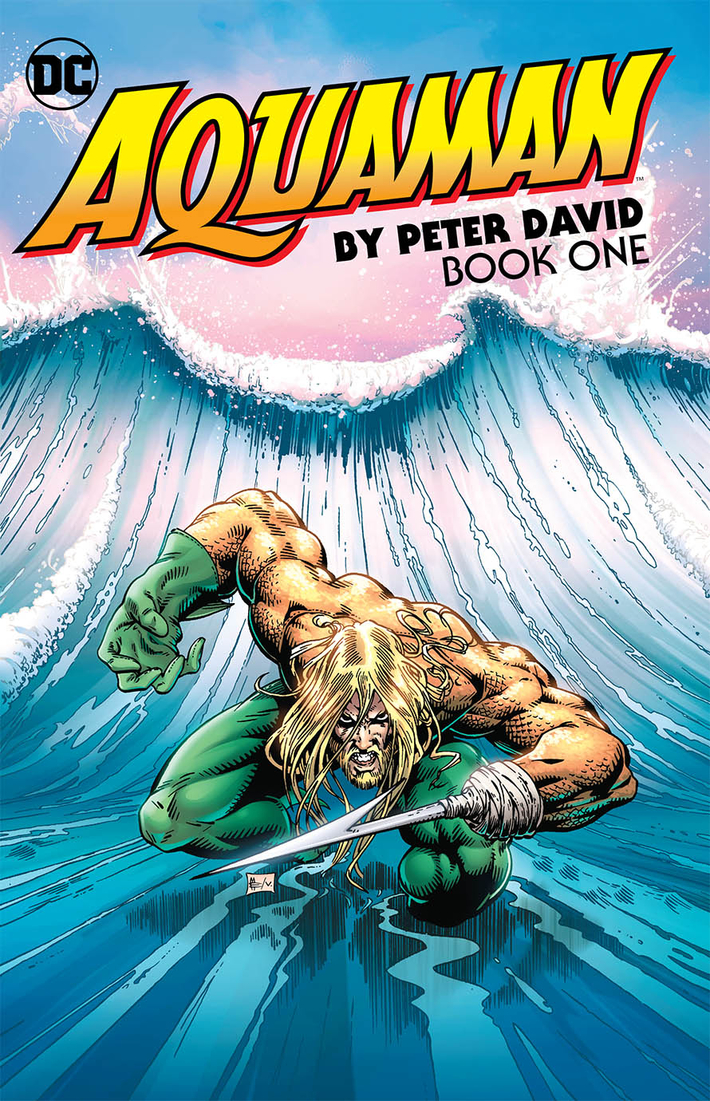 “…right after Zero Hour (or maybe coinciding with, hard to recall)”

Working from memory here, I’m almost 100% certain the “zero issue” of Aquaman came out between issues #2 and #3. I liked the beard much more than the chewed off hand. The mid-90s was a time when Peter David and (most of) the Image founders were conducting their very public feud. I was entertained by it at the time, but more recently I have become annoyed that both sides of the fight brought it into the comic books themselves.

Erik Larsen criticized the name of the villain Charybdis on the grounds that nobody knew what it meant. He maintained a much better name would have been “Piranha Guy.” Peter David responded in his “But I Digress” column, but years later, when Erik Larsen succeeded David on the title, he brought back Charybdis and re-christened him Piranha Guy.

To get with the spirit of the thread, I remember when Bill Mantlo and Jackson (then “Butch”) Guice aged the Micronaut's Commander Rann and added a beard to give him a bit more gravitas. As soon as they were off the title, though, the next creative team “re-youthened” him.

Batman Adventures #15 by Kelley Puckett with art by Mike Parobek is a story mainly about Commissioner Gordon with just a little bit of Batman thrown in. I love stuff like this, where a “backup character” is featured more prominently. It’s the good commissioner versus the mob led by Boss Thorne, and our hero gets to show how awesome he really is. This is a man you would believe is a hardened cop. The only thing I didn’t like about this story is that Batman helps him beat the gang in the end. I would have liked to have seen Gordon stand on his own.

This series came out in conjunction with Batman the Animated Series, and so the art reflects that. Out of all the artists who contributed to this book, my absolute favorite was Mike Parobek. His figures are so smooth and each one is unique.

Although it’s been awhile since I’ve read them all, this issue still stands out in my mind.

Aquaman #0: ... he relives a nightmarish version of his past, recounting such highlights as Mera (with whom he seems to have had a recent bout)

That might be a reference to the 1989 Aquaman mini by Keith Giffen, Robert Loren Fleming and Curt Swan.

THAT...is one glum FF cover. No wonder I wasn't buying the book at the time!