Yes, I hear the yawns. Most people don’t know how comic books and graphic novels get to where they buy them, nor do they care. But in this case, it turns out to be important.

Here’s why: Diamond has had a virtual monopoly on distribution of comics and graphic novels to comic shops since the mid-1990s. But while Diamond was closed during the coronavirus shutdown, DC Comics (publisher of Superman, Batman, et al) announced it would continue to distribute through two new distributors it helped create. Then this week DC announced it would continue with these distributors exclusively, cutting Diamond out entirely.

The move was not well-received by a lot of retailers, according to reports at comicsbeat.com and bleedingcool.com:

“This is an insane bombshell,” wrote Brian Hibbs of Comix Experience in San Francisco.

“To say that I am seething with rage right now is a total understatement,” wrote Chuck Rozanski of Mile High Comics in Denver.

“This is such a disgusting and ill-timed move,” wrote Mike Wellman of Atomic Basement in Long Beach, California.

“This is a declaration of war,” wrote Dennis Barger of WonderWorld Comics in Taylor, Michigan.

“What?” I hear you say. “I thought monopolies were bad things! Shouldn’t everyone be pleased that there will be more competition?”

Short answer: No. The comics industry operates on a shoestring, where the fall of a single domino can cause untold havoc. And its weak link has always been distribution — the very thing DC’s move subverts. Also, the two new distributors are outgrowths of retail stores with large mail-order businesses, meaning they were and are competition for all the other comic shops … who have just become their customers.

Ominous, eh? Nobody summed up this point of view better than Eric Stephenson, publisher of Image Comics, who tweeted:

“Those who ignore history are doomed to repeat it.”

That famous Santayana quote is particularly apt in this situation. Because not only does the comics industry have a history of distribution catastrophes, this specific catastrophe has happened before!

Scene: early 1990s. There are a number of comics distributors, including No. 1 Diamond, No. 2 Capital City and No. 3 Heroes World. But then, much like DC today, Marvel Comics decided to go exclusive with one of them (Heroes World).

The result was carnage. With everybody but Heroes World losing the No. 1 publisher — roughly 30-40% of the market — the other distributors scrambled for what was left, offering sweetheart deals to other publishers (notably No. 2 DC Comics) to sign exclusive deals.

A number of distributors and even some comic shops went belly up. By 1997, the last distributor standing was Diamond. Marvel (and all the other publishers) meekly signed with them. And that’s how Diamond became a near-monopoly.

But, as noted, that’s not the only ugly distribution story in the history of comics. Especially before 1978, back when comics were distributed by the same people who distribute magazines. In those days, the distributors held veto power over the entire industry.

For example, when the draconian Comics Code of 1954 was created, it would have only been words on paper without the distributors as enforcers. The national distributors refused to move any books without the Comics Code Seal of Approval (except for family-friendly Dell), which put the final nail in the coffin for EC Comics.

What was EC Comics? Only the finest collection of artists and writers ever assembled in the history of the medium. Legendary creators who were responsible for books like Tales from the Crypt (horror), Frontline Combat (war), Shock SuspenStories (crime), Weird Science Fiction (SF) and MAD (humor). 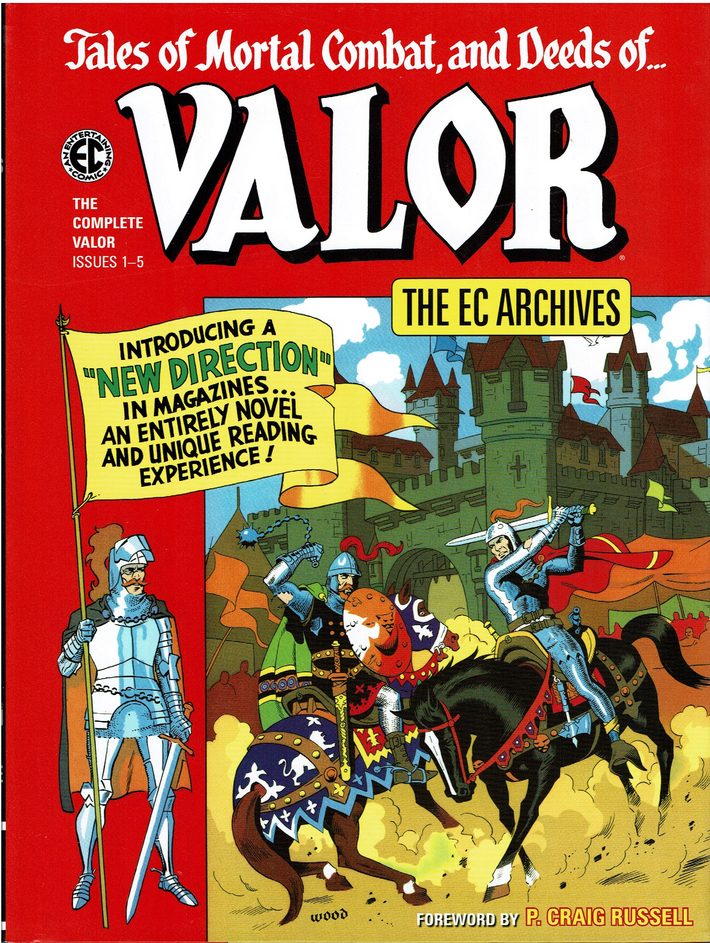 Despite shifting to Comics Code-worthy books like Valor (historical fiction), distributors made sure that EC Comics was done for. (Cover art by Wally Wood, courtesy Dark Horse Comics)

Some argue the Comics Code of 1954 was aimed like a gun at EC Comics (and I am among them), but it would have been a misfire without the distributors, who left the publisher’s books languishing in warehouses and on New York docks. EC even tried to rebound with a line of Code-friendly books, including Extra! (two-fisted reporters), M.D. (medical drama) and even Psychoanalysis (seriously). But no soap; the distributors ignored them, too. Eventually EC had only MAD left, which was a magazine outside the Code’s reach.

EC wasn’t the only publisher to drop dead after the Code. The Comics Code was an extinction-level event, predicated on public outrage over horror and crime books, and abetted by audience-stealing inventions like television. There were likely other factors too, but there is no doubt that the distributors were the muscle in this drama.

The Code wasn’t the only body blow against the industry in the 1950s, and distribution was central to that story, too. Scene: 1957 …

Before Marvel was Marvel, it had other names, including “Atlas” for most of the ‘50s. That’s because publisher Martin Goodman launched his own distribution company in 1951, the Atlas News Company. By 1952 all of the books published by Goodman’s 59 shell companies (you read that right) bore the Atlas logo on the cover. Before it was Marvel, Martin Goodman’s company was known as “Atlas” thanks to the distribution seal on books like Strange Tales. (Cover art by Bill Everett, copyright Marvel Comics)

But in 1956 Goodman had a change of heart, dissolved Atlas and turned to the American News Company to distribute his books. Which turned out to be a really, really bad decision. The following year American lost a restraint-of-trade lawsuit brought by the Justice Department, and essentially evaporated.

With no other choice, Goodman was forced to beg Independent News to distribute his books. “Beg,” because Independent News was owned by arch-rival National Periodical Publications, known today as DC Comics. Independent said, “Sure, we’ll distribute your books. But you can only publish eight books a month, losers! Haw! Haw! Haw!”

OK, I wasn’t there, so I don’t really know what they said. But Atlas, which had been publishing 50 or 60 books a month, was restricted to eight or so until they wiggled out of their contract … in 1968.

Lastly, I draw your attention to Blazing Combat, an awesome war magazine produced in 1965 by Warren Publishing, famous for Creepy, Eerie and Vampirella. The reason Combat was so good was that it was essentially a continuation of EC’s war comics, with many of the same creators — including Frank Frazetta, John Severin and Wally Wood — and a pronounced, realistic, war-is-hell vibe. 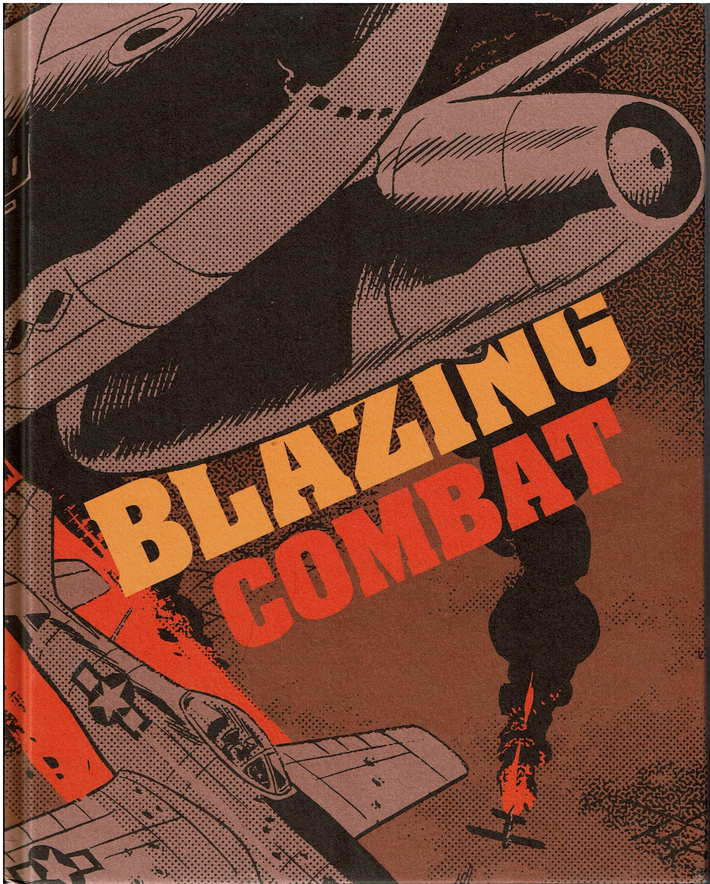 That latter part got them in trouble with the U.S. military, which was ramping up the Vietnam War at the time and was struggling for public support. So Blazing Combat was blocked from sale on military bases. But worse, the American Legion lobbied the distributors to give Blazing Combat the EC Comics treatment. And sure enough, the book began being left on docks and in warehouses.

Blazing Combat was canceled with (counts on fingers) issue #4.

Fortunately, the national periodical distributors no longer have anything to do with comic books, which are handled by specialized distributors like Diamond. But as retailer reaction to DC’s decision shows, it’s still a fragile food chain.

Of course, maybe nothing will result from Diamond losing the No. 2 publisher. On the other hand, maybe the entire system will collapse, and comics will become digital only. My guess is that something in between those two extremes will happen.

But the history isn’t promising.

Permalink Reply by Emerkeith Davyjack on July 9, 2020 at 5:07pm
...Your commentary on this here, dear Captain, is the first I've heard of this (The Projector shutdown & personal factors has REALLY left me out of contact with comics generally.)! Could you point me, please, to some stories about this? Perhaps both comics-press and non-comics press?

Here's one, Emerkieth, and THR is pretty authoratative.

Here's another, from Daily Variety.

If you want more, just Google "DC Diamond" and you'll get a belly-full.

...Thank you! I suppose I wrote , " COVID " or similar where it appears my phone's spelling function put " Projector " above.

Beginning in 2021, DC is going with Lunar only, and stores have a minimum order to receive shipments: $125/wk or $500/mo. Better details here

My local comic book store has been having trouble acquiring any DC products since they left Diamond.

Between that and the COVID-19 restrictions on business operations, they are seriously considering retiring and shutting down operations completely.

This Lunar announcement will probably be the final nail on the "coffin".

With the next closest comic book store for me being over 30 miles one way from my rural residence, I'm probably looking at the end of my comic book buying/reading.

Have you considered online, Lee? I know Mycomicshop has a subscription service. 35% off pre-orders, and $5 flat shopping fee. Plus, if you don't want your comics every week you can set-up your own frequency to save a little that way as well. I've never used the subscription but I have bought back issues from them, and they packed them very well.

I haven't investigated any online options yet Travis. Want to see what happens with the place I'm at first.

Besides, going online has its disadvantages too. You can't rummage through the bargain box(es) or peruse anything else that might pique your interest (models, games, baseball cards, etc) but want to check out before making a final decision on first.

I've used MyComicShop.com for back issues of series I had missed. Their packaging is the best I've ever seen. Take a peak at it. They have various services that you might like if you lose your LCS. To quote a statement on the site, "Buddy Saunders and Lone Star Comics have been selling comics since 1961." Buddy Saunders was a comics fan and creator when I was in high school, and MyComicShop is the online version of Lone Star Comics.

Buddy Saunders closed all of his brick & mortar Lone Star locations a few years ago; MyComicShop is strictly mail order. they've moved their warehouse from mid-town Arlington to an industrial complex nearby. (Their old warehouse is a microbrewery now; travis and Tracy and I have been there once) I've used their mail order from time to time, but sometimes (to save time and postage), I had them hold my order for pick-up. their mail order was pretty efficient, though; it was really more effort to pick it up in person than it was worth. Frankly, I've never been impressed with any of the Lone Star brick & mortar stores. He sold the midtown one and it became West Comics for a time, but it went out of business this year.

Mycomicshop.com has been my go-to for back issues for years, if not decades.