Hermes just finished reprinting the entire run of the first U.S. The Phantom comic book, which ran through three publishers (Gold Key, King, Charlton). That was a series that I had always wanted to collect -- I had most of the Gold Key issues -- but never got around to, and Hermes did it for me. A lot of it is crap, but the Gold Key issues were mostly pretty good (with gorgeous painted covers) and later issues had early work by Don Newton and Jim Aparo.

Hermes is also reprinting the U.S. newspaper strip, in separate Dailies and Sundays series. I've really enjoyed those -- there's a joy in those strips that is infectious.

I bought a couple of the Gold Key Phantoms back in the day. For the last few years I've been following the Phantom strip, which is much better, on the King Features website (Comics Kingdom). Since the Sunday strip is a separate story I read the Sunday ones in a chunk once a month.

Permalink Reply by Emerkeith Davyjack on November 5, 2018 at 11:19pm
...I thought those those Hermes books of the Gold Key/King/Charlton title were: (1) a few years in the past by now (2) selling for quite a but by now. At least based on one pricing of the King book I saw on Amazon??
All of the GK and many of the King comics stories, incidentally, were remakes for comic books of KFS strip stories, so perhaps there was a certain feeling of " boiling down/simplification " to them? Your comment about the ' joy...infectious " of Falk's stories is interesting, CC. I think you compared - I presume especially more Golden Age-ish epidodes - the KFS-Falk Phantom to the " screwball comedies " of pre-television Hollywood. I only have one volume of the Hermes KFS books, and it's in storage now

I grew up reading The Phantom strip in one of my local daily newspapers.* But I haven't seen it in years. I liked the clean artwork by Sy Barry.

Back in the '80s, DC did a four-issue Phantom miniseries drawn by Luke McDonnell, who at the time was a hot artist because of Suicide Squad and Iron Man.

* Back then, there was more than one local daily newspaper where I Iived.

The Phantom was one of the costumes I had for my Captain Action doll. 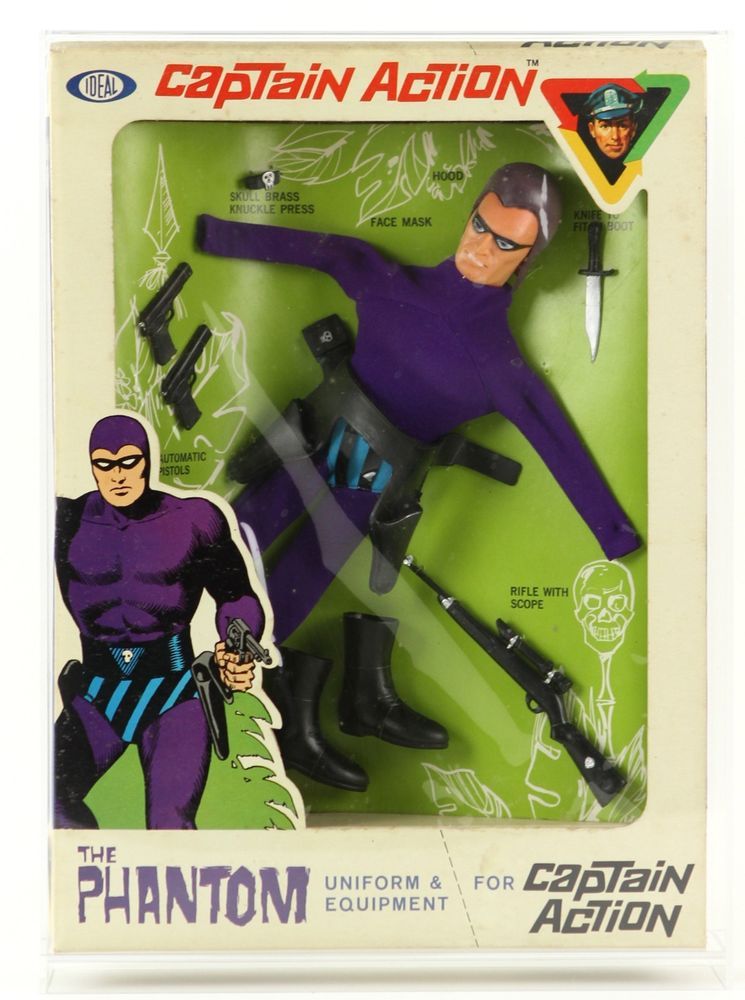 Permalink Reply by Emerkeith Davyjack on November 6, 2018 at 1:26pm

...I had a very slight encounter with the Charlton series in the 70s, but it was more than a decade later that either the DC mini - or, more likely, the short-lived ongoing that followed it, in which every storyline was a two-parter. My - really introduced me to Kit Walker. 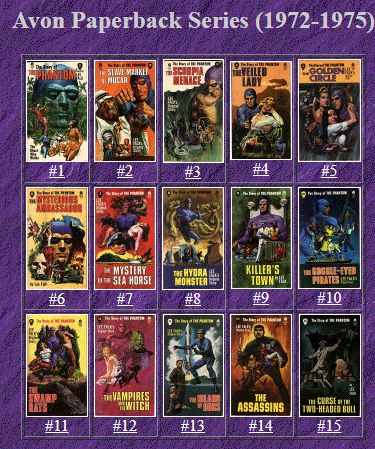 Permalink Reply by Emerkeith Davyjack on November 7, 2018 at 8:09am

...My comments about the Frew " Oz Phantom " comic (which, actually, published all but absolutely no Phantom material by Australian creators but did create a lot of its covers Down Under) are based on my memory of the 00s subscription that I had.
The comic was a teeny bit larger-
paged-sized than the American standard. Standard issues followed the American 32-pages-plus-cover template, but there were frequent giant issues, including humongously gigantic Annual-style issues of over 200 pages! There was little advertising, and what there was pretty much only?? collectibles/whatever for older " Phans ".. No ads for candy or movies let alone cars or joining the military, as the DC/Marvel (until recently, anyway) model did. Standard story length was upwards of 30 pages, with stories sometimes finishing on the inside bacover IIRC.
While the Swedish-produced material, from Egmont, was the bread and butter, a major other source was the actual King Features strips - the present-day ones, reprinted pretty much immediately after their newspaper appearance (Several major Australian newspapers - All?? Murdoch/News Corp.-owned - ran the strip.)...and re-reprintings of Lee Falk's stories from his 60ish years on the strip, which ran in giant issues, and Falk's name was on the cover logo for all issues of the comic!
The comic was always black and white. Frew, at that time was a pretty small mom and pop operation. The owner of the company then has since died and Frew was sold to people including an artist who'd worked on
Phantom material (Frew has a Wikipedia entry). Apparently, the present owners have started printing at least some color stories, and have adopted what I see as the modern-day Yank concept of having a small number of alternate covers - and have added some spin-off/secondary titles. The 00s Frew had only the one title - and at least upon occasion, had covers that were reusings of images from inside stories (Though it ran entirely new covers I guess the majority), not new drawings. I, myself, rather liked 'em! Their covers tended to be, in my mind, sorta Bronze Age-y. No word balloons or " teasers " on the cover, though
Frew had rather an excuse for this - as the Frew title issued 31 issues a year! Yes, that's correct, more than biweekly. Australia, I guess, REALLY likes The Ghost Who Walks! IIRC, the present-day title is described as averaging about 25,000 copies an issue in the far smaller than the US population of AU and, remember, more than bi-weekly and I saw it described as the best-selling vomics magaxine there. (I've seen it saud that reprints of the Bongo SIMPSONS material really do well Oz-ward as well, too.) The Frew title started in the late 40s and their numbering reached 4 figures well before that newcomer Kal's original title did!!!!!:-)

Back then, there was an AU website called The Deep Woods that provided details of the Frew title - and the " source " Scananavian titles (IIRC, Norwegian, Danish and Finnish titles - yes, no Swede one, oddly enough.), which themselves may have been color by then - and had a super-complete listing of all the KFS Falk stories, the Frew issues (Which, in their earlier years, dealt with the scarcity of stories by really endlessly re-reprinting the same Falk stories at a turnover level to make Mort Wesinger and Stan Lee blush!), most if not all American comic books, and more. (The site may still be up - but the builder of it announced his disillusionment with contemporary Phantom stories and generally went all GAFIA some years ago and stopped updating it.) A " more " it listed was the short-lived British-issued color Phantom comic book that came out in the 90s and was distributed to American comics shops then as well which also drew from the Swedish material, and which I got back then.

... and Falk's name was on the cover logo for all issues of the comic!

It's somewhat jarring when, in the current strips, Lee Falk occasionally appears full-figure and talks to the reader directly. He looks pretty good for someone dead over 19 years.