The Punisher - An Objective Look

Last year I bought the Swamp Thing Omnibus and the Punisher Omnibus on the same day. Although I chose to read the Swamp Thing Omnibus first, it had been my intention to read the two back to back, but when I finished the Swamp Thing one I decided to move directly to the Alan Moore material. I got as far as “American Gothic” when my interest shifted, and I never did get back to the Punisher one. Until now. I’ve never been a huge fan of the character, but I thought I’d take a look at the early stories in an effort to discover the reason for his popularity.

The Punisher enters the story quite abruptly, shooting a plaster statue of Spider-Man on the splash page while his ally, the Jackal, looks on. The Daily Bugle has reported that Spider-Man killed Norman Osborn, and that’s enough proof for the Punisher. While out web-swinging, Spider-Man’s “spider-sense” begins to tingle and he narrowly manages to avoid being taken out by a concussion grenade. Spidey confronts the Punisher on a rooftop, but is bound by a weapon which fires cables. The Punisher is about to execute him when Spider-Man breaks his bonds and turns the tables. The Jackal, hiding nearby, attacks Spider-Man from behind and he falls off the roof, apparently to his death the Punisher and the Jackal assume.

By the time Spider-Man regains his senses and returns to the roof, the Punisher and the Jackal are gone, but he finds a clue leading to the Punisher’s arms dealer. Back in the Jackal’s lair, an argument ensues. Whereas the Punisher was willing to kill Spider-Man, it goes against his “code” to allow him to die by accident. He leaves with the issue unresolved in order to get a new gun from his dealer. When he arrives he finds Spider-Man waiting for him. He also learns that it was the Jackal who left the incriminating evidence behind. Spidey knocks the Punisher out and leaves. The only thing we learn about the Punisher’s background in this initial outing is that he was a Marine for three years. Beyond that, he is clearly a villain,

I agree Jeff that the punisher comes over as full-villain here but the idea that he isn't quite, that his intentions were subverted is still present I think as he is clearly not happy that the Jackal conned him into believing Spider-Man was the villain.

I think it was the Giant-Size/Annual where he teams back up with Spidey against Moses Magnum that his real modus operandi became clear.

I loved his early appearances before (like Wolverine) he became too brutal too indestructible and too bloodthirsty.

I really liked some black and white solos that I remember (from a British reprint called 'Savage Action'- I believe so forgive me if I don't know the original production without research) which I thought were absolutely wonderful.

Will you be covering them?

I don't know where the perception that Punisher could be a protagonist came from.  But the seeds may have been in this first appearance already.  Spider-Man decides to let him leave and it just isn't clear why.

Agreed. That perception becomes even clearer in issue #134-135.

“Will you be covering [the black and white solo stories]?”

“Spider-Man decides to let him leave and it just isn't clear why.”

My interpretation is that Spidey himself is wanted for murder at this point and is avoiding all contact with the police.

South American criminal the Tarantula and his henchmen, Hildago and Juan, hayjack a day-liner excursion to hold for ransom, but they also rob the passengers. Spider-Man happens to be aboard in his civilian identity. He quickly changes into his costume, but soon has to jump overboard to save a crewman who might be unconscious. Spider-Man eventually makes his way back on board (by hitching a ride on a harbor patrol helicopter via webline) only to discover that the Punisher, who had been trailing the criminals, was also a passenger.

The Punisher mistakes Spider-Man for one of the hijackers, allowing Tarantula and his men to escape. Realizing his mistake, the Punisher sets up a meeting with Spider-Man at midnight at the Cloisters in upper Manhattan. There, he reveals Tarantula’s backstory via a slide show. (!?) Suffice it to say that the Tarantula is one bad hombre. The Punisher leads Spider-Man to Tarantula’s hidout, and Spider-Man helps defeat him. Although they have different methods, Spider-Man treats the Punisher like an ally. The Punisher admits to having had ideals “…once. But that’s a long story, my friend—one better told at another time.”

ASM #129: While out web-swinging, Spider-Man’s “spider-sense” begins to tingle and he narrowly manages to avoid being taken out by a concussion grenade. Spidey confronts the Punisher on a rooftop, but is bound by a weapon which fires cables. The Punisher is about to execute him when Spider-Man breaks his bonds and turns the tables.

When I recently re-read The Punisher's first appearance I was surprised to see him using a cable launcher and some kind of ray gun, which are both fantasy weapons. Even though he is shown with real weapons on the cover, he doesn't seem to be presented as an out-and-out killer in the story. The writing obviously intended him to be a villain, though one mislead by a even more villainous character.

Spider-Man thwarts a kidnapping. One kidnapper with a gun is about to shoot Spidey from behind. Suddenly, the kidnapper is shot in the head by the Punisher from a nearby rooftop, saving Spider-Man’s life. The Punisher quickly departs in his van. This is not the high-tech van he would later own, but this issue does introduce the concept of an audio “War Journal.” His headquarters is an abandoned power station on Manhattan’s Upper East Side. He opens the back of the van to find Spider-Man inside it. He has a lot of high tech equipment, but there’s no explanation of how he got it or where it came from.

He explains to Spider-Man that he is on the trail of Moses Magnum of the Deterrence Research Corporation, which supplies chemical weapons to whoever can afford them, no questions asked. Spider-Man and the Punisher launch a two-pronged attack. Spider-Man is captured and taken away in a hovercraft. The Punisher observes that everything is going according to plan.

Magnum’s camp is somewhere in the jungles of South America. It is there he tests his chemical weapons on his kidnap victims. Magnum unmasks Spider-Man, but it is not Peter Parker! He takes the man’s picture and plans to use it to find out Spider-Man’s identity, just out of curiosity, after he kills him. We then find out that the man is Peter Parker after all, wearing a wig and mask as part of the Punisher’s plan. The Punisher then arrives on the scene, having followed a tracer. He fills Spider-Man in on Magnum’s backstory. (Essentially, he’s an Ethiopian who sided with Mussolini against his own people.) Spider-Man and the Punisher don gas masks and launch an attack against Magnum’s forces.

Magnum is about to smash a canister against Spider-Man’s head. Spider-Man warns the Punisher not to fires, but he does and hits the canister, which spills its contents over Magnum, causing him to dissolve. Spider-Man suspects that the Punisher head his warning, but killed Magnum on purpose, to which he turns a blind eye. The Punisher killed the kidnapper at the beginning ostensibly to save Spider-Man’s life, but he didn’t have to kill Magnum. I think, at this point, the reader gets his cue how to react to the Punisher from Spider-Man.

The Punisher was lifted pretty much whole cloth from Don Pendleton's Mack Bolan aka The Executioner, who was created in 1969.  The background, the origin, and other concepts like the War Journal and the War Wagon all come from Pendleton's novels.  The origin had to be sanitized a bit for the comics. 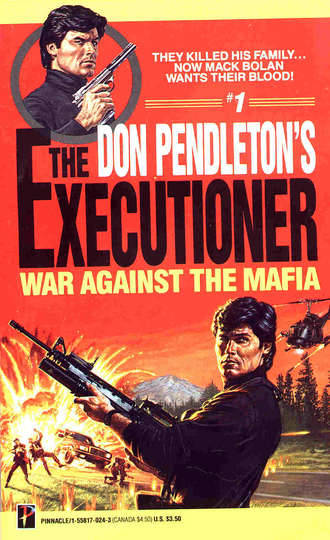 An interview with Pendleton.  He talks about Marvel "taking liberties" with his Executioner character.

Permalink Reply by Jeff of Earth-J on October 24, 2019 at 10:51am
Wow, I hadn’t realized that the Punisher was so close to the Executioner.

Marvel Preview #2 wasn’t the first appearance of the character, but it was the first intelligent use of him. If it’s not obvious from the cover, Marvel Preview was a black & white magazine which means it wasn’t subject to the CCA. (Note the through-and-through bullet wounds on the cover.) We are told the Punisher’s origin at last. He was an officer in Viet Nam and had been awarded the Medal of Honor, a Bronze Star, a Silver Star and four Purple Hearts. He was up for the Medal of Freedom when his family was killed and he deserted.

Here’s what Gerry Conway had to say about the Punisher’s first appearance in Spider-Man #129: “To keep the Jackal on the periphery for his first appearance, I needed another disposable character to put front-and-center for a one-issue confrontation with Spider-Man. As I said before, the early 1970s were a dark time, with vigilantes on the street, and corruption in high places. I thought it might be fun for Spider-Man to face a modern vigilante who’d been manipulated by the Jackal into believing Spidey’s negative press.”

Huh. Not a word about Don Pendleton’s Executioner.

Well, I can't imagine him saying for the record,  "So, I ripped off this character that I knew about."