By 2009, the Teen Titans were a successful franchise with two ongoing titles yet the comics themselves were maddeningly mediocre.  When I looked back on 2008, I realized that I enjoyed maybe 1 issue in 3.  I don’t need to tell you, faithful reader, that’s not a good percentage.  Yet, by the end of 2009, the two Titans titles had rebounded.  They didn’t regain the heights of the Wolfman & Perez or Johns & McKone eras but they were at least interesting and solidly entertaining.  So how did the Titans franchise get from A to B, from disappointing to enjoyable?

The year didn’t start out well, with unsatisfying stories all down the line.  DC published another Titans mini-series, this time focusing on Ravager in Terror Titans (#1-6, Dec. ’08-May ’09).  I had enjoyed the “Terror Titans” arc in the regular title and looked forward to this follow-up but, unfortunately, minor complaints from the first arc became major problems in the mini-series.  Kidnapped heroes forced to fight in gladiatorial combat is a hoary old comic book cliché.  I didn’t mind it in the original arc because it was a minor point in the larger battle against the Clock King.  Unfortunately, the cliché was brought to the fore in the mini-series as Ravager made the questionable decision to infiltrate the club and work her way up from the inside.  Terror Titans was also diminished by the injury porn problem infecting DC at the time.  The resolution didn’t work for me either as the revelation that Miss Martian had also infiltrated the gladiator camp in disguise came out of nowhere.  Terror Titans was a disappointing waste of otherwise interesting characters. 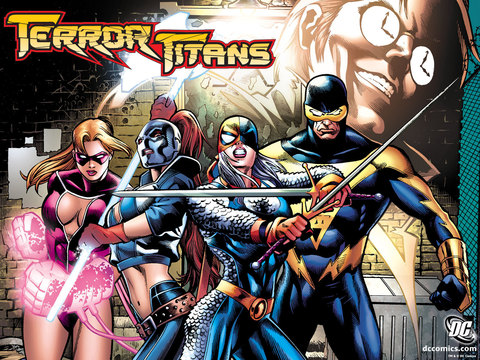 The second major arc in Titans was marginally better (#7-11, Jan.-May ’09).  The first arc in 2008 featured yet another battle against Trigon, this time with some mixed-up iconography.  For the second arc, writer Judd Winick finally found a consistent creative partner in penciler Howard Porter.  However, Winick chose to have Jericho turn evil again, resulting in another story that felt like repetition more homage.  He also stretched the story out to five issues, so that it felt tedious by the end.  There were some good points.  The team’s paranoia when they weren’t sure who was possessed was a nice, natural bit of drama.  I also generally appreciate a guest appearance by the Justice League.  Plus, it was nice to have consistent art across a story arc, even though I liked the relatively new Julian Lopez a smidge better than the veteran Porter.

The other opening arc, over in Teen Titans, was a recruiting and re-shuffling story.  Normally, I enjoy that sort of thing, but this one was a little flat for me.  The first issue (#66, Feb. ‘09) was decent enough as Robin tried to replenish the team’s ranks with a recruiting drive before realizing that his heart wasn’t in it and dropping out himself.  The tale then took a detour into a Brother Blood origin story for the “Faces of Evil” event (#67, Mar. ’09) before the depleted team entered Hell to rescue Kid Eternity (#68, Apr. ’09).  Along the way, Red Devil successfully revoked his agreement with Neron with the side effect of losing his powers.  Finally, Sean McKeever completed the reshuffling story in issue #69 (May ’09).  Miss Martian showed up with a horde of young heroes rescued from the Dark Side Club in Terror Titans.  Recently returned, recently rescued and newly introduced heroes augmented the line-up bringing the team back to full strength.  As I said, the story fell a little flat for me.  Even though I read the Terror Titans mini-series, the resolution in the main title came out of left field.  And, though I was delighted to see Milestone’s Static integrated into the main DC Universe, the line-up as a whole was underwhelming. 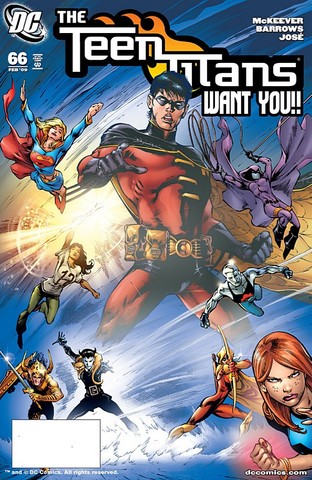 The best part of this arc was arguably a side-story.  In a “Faces of Evil” one-shot by David Hine and Georges Jeanty (Deathstroke #1, Mar. ’09), Ravager visited her father in prison.  Deathstroke turned the visit to his advantage and managed to escape, setting him up as a renewed threat while teasing the possibility of a new Deathstroke title.  The one-shot had strong character-driven drama, intense action and a forward-moving plot, features that were mostly missing from the main titles at this point.

The year’s mid-point was marked by a classic-style crossover between titles, the Titans’ first since “Total Chaos” ran through New Titans, Team Titans and Deathstroke in 1992.  This year’s crossover “Deathtrap” ran through the two core titles, Titans and Teen Titans, plus a new Vigilante series by Marv Wolfman and Tom Lyle.  I’ll admit that I was a little leery at the outset.  The main titles were struggling mightily and I didn’t have a lot of faith in Sean McKeever’s ability to engage my interest.  Plus, crossovers have a way of running off the rails.  In addition, Deathtrap’s main villain was Jericho, who had just overstayed his welcome in Titans.

Yet, to my surprise, McKeever and Wolfman turned in a tight, taut, thriller.  They packed the crossover into only six issues (Teen Titans Annual #1, Titans #12-13, Vigilante #5-6 and Teen Titans #70, June-July ‘09).  The various groups had believably conflicting agendas, from Vigilante’s determination to stop Jericho at all costs to Deathstroke and Ravager’s uneasy alliance to rescue their son and brother.  The crossover also created a setting for the teams to evolve.  The new Teen Titans line-up came together as a cohesive unit while the older members of Titans began to experience friction and dissolution.

Finally, the resolution was dramatic and surprising.  I’ve complained about the trend of gratuitously violent injuries infecting comics at this time.  And yet, violent injury can be an appropriate story point on occasion.  In this case, Vigilante kept his promise that he wouldn’t kill Jericho yet still managed to neutralize him by blinding.  It was brutal, effective, and suitable to the story.  “Deathtrap” turned out to be Sean McKeever’s swansong for the Titans.  It also turned out to be an unexpected turning point. When I surveyed the issues of Titans for the second half of the year, I was initially skeptical.  Every comic had a different creative team and I was concerned that it indicated a lack of direction or at least continued inconsistency.  Instead, I discovered that editor Brian Cunningham had adopted an interesting new approach.  Each issue focused on an individual Titan.  It was like a run of Titans Spotlight in the main title, except that these stories were central instead of supplementary and, to my surprise, generally well crafted.  Each story recapped the hero’s history, established their current status and then moved them forward in a new direction.

Cyborg went on a date for the first time since his return (Titans #14, Aug. ‘09 by Eric Wallace and Michael Shoyket).  Tempest mourned the recent death of his wife and son (#15, Sept. ’09 by JT Krul and Jose Luis).  Starfire reflected on her complicated relationship with Dick Grayson and considered an offer to join the Justice League (#16, Oct. ‘09 by Christopher Yost and Angel Unzueta).  Beast Boy got over his break-up with Raven by moving west and re-joining the Teen Titans (#17, Nov. ‘09 by Pat McCallum and Angel Unzueta).  And Raven went on a solo mission to rescue a kidnapping victim from the church of Brother Blood (#18, Dec. ’09 by Bryan Q. Miller and Angel Unzueta).  The new approach continued into 2010 with solo issues for Donna Troy and Arsenal.  Naturally, some issues were better than others.  The Cyborg and Beast Boy stories were particularly well done, though I wasn’t as impressed with the Tempest or Raven issues.  Admittedly, that was mostly due to my distaste for events outside of these particular issues, namely the senseless death of Dolphin in Aquaman and the return of Raven’s brothers from the volume’s first arc.  Yet, overall, I was very pleased with this stretch of solo stories.

At this time, the Titans were also involved in a major story.  The full team starred in the Blackest Night: Titans mini-series as part of DC’s big crossover event.  I was a big fan of Blackest Night.  I appreciated the way it raised the stakes by having fallen allies come back for the other side.  I also appreciated the heightened emotional stakes with heroes fighting undead versions of their friends and loved ones.  The Titans mini-series by JT Krul was one of the best of the bunch as Gar struggled with his unresolved feelings for Terra, Donna was confronted with renewed grief for her son, and the current Hawk & Dove fought for their rights against the original duo.  It was another tight, tense story that ranked with “Deathtrap” as one of the best of the year.  I also enjoyed Ed Benes’ art.  He’s often criticized for his tendency toward T&A (and rightly so) but he was mostly restrained on this arc (the first cover with Terra, notwithstanding).  That restraint allowed his smooth style to shine through. 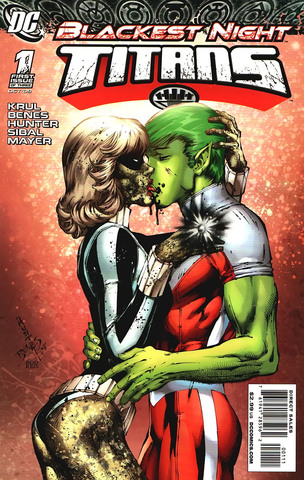 Meanwhile, the Teen Titans were going through some changes of their own.  Ravager attempted to rejoin the team in issue #71 (July ’09) before deciding that she didn’t really fit in and setting off on a solo adventure that would become a back-up feature.  The team then intervened in an attempted prison break by Shimmer and her new Fearsome Five (#72-74, Aug-Oct. ’09 by Bryan Miller and Joe Bennett).  It was a good opportunity to see Wonder Girl in action as the team leader.  Plus, it was fun to see the new team face off against classic foes.  With Beast Boy’s help, the Teen Titans next set out to rescue Raven from a mythical Wyld beast with six heads (#75-76, Nov.-Dec. ’09 by Felicia Henderson, Joe Bennett and Yildiray Cinar).

Throughout these stories, the new Titans line-up continued to gel.  I liked the cast a lot more at the end of the year than I did at the beginning.  Blue Beetle and Static were great additions.  The new Aquagirl and Bombshell had been developed nicely, with Aquagirl growing into a princess role while Bombshell took over as the team’s resident disturber.  Wonder Girl was an interesting leader, partly because of her lack of confidence.  And Miss Martian is always awesome.  The later additions of Beast Boy and Raven were also good, adding top-shelf characters to the title while also setting up natural conflict over team leadership.  I was particularly impressed with new writer Felicia Henderson, though incoming artist Yildiray Cinar didn’t match the flair I remembered from his work on Image’s Noble Causes.

By the end of 2009, the Titans were back on the upswing, with quality stories across three titles. I've enjoyed every one of your Teen Titans Project reviews. Pretty remarkable, since the closest I came to the Teen Titans comic was Haney's first Brave & Bold team-up comic.

Thanks, Chris! It's great to see where the series went to after I left it.