The Weekly TPB--STARMAN: Sins of the Father 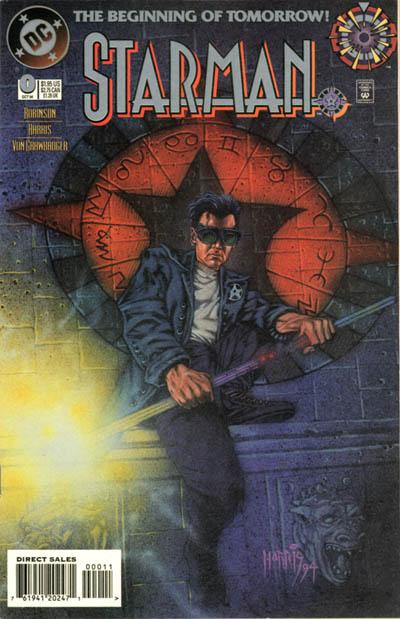 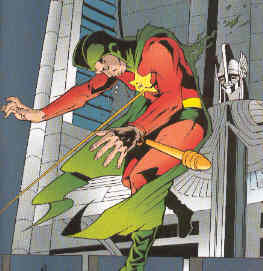 In the wake of Zero Hour, DC tried several concepts utilizing some of their older concepts. The best of them, indeed, the best of the last twenty-five years was Starman by James Robinson and magnificent artwork by Tony Harris and Wade Von Grawbadger and edited by Archie Goodwin.

We are introduced to a major concept of the series: its location of OPAL CITY where Starman's exploits are now retconned into taken place. It's an old, avante garde, film noir, art deco and bohemian city with age and history permeating every page. There is the weight of time and the freedom of imagination which allows it to become everything the story needs it to be be yet keeps one foot in reality.

And it has its protector, TED KNIGHT the original STARMAN of the red and green, wielder of the COSMIC ROD, for decades but now he is old and frail, so he passes his mantle to his eldest son DAVID who always wanted to be Starman!

After an ever-so-brief time fulfilling what he truly believed was his destiny, David Knight is shot dead as he takes flight, crashing to the ground, destroying the Cosmic Rod and becomes the first victim in a war that he knew nothing about!

Next: We Don't Know Jack!

Re-reading the first omnibus a couple of days ago, I was struck by what appears to me a strong Bernie Wrightson influence in Harris's art.  Very evocative and fits the often dark mood of the early issues.  Fortunately, Robinson avoids laying on too much gloom and adds some touches of joy and discovery to the series.

......the latter part of the run wasn't collected yet, and some of the earlier volumes were out of print.

I'm not sure which year it was, but I was fortunate to discover the Jack Knight Starman in trade form when all of the volumes were available.

The next established person that Jack will meet is CHARITY who was the hostess (with the mostess) from Forbidden Tales of Dark Mansion, starting with #7 (Ju'72).

It seems to me that this was an homage to Gaiman's Sandman, which included several of the old "mystery" books' hosts and hostesses as characters in the Dream Realm..

Just finished reading these issues this morning. One of the most distinctive recurring features shows up in Issue 5, the first of the "Talking With David" issues. In the first one the brothers mainly banter and fight, but they reveal a lot about the family. I've got the Omnibus, so I went on to Issue 6, the first of the "A Tale of Times Past" issues taken from the Shade's journal. This was a brilliant regular feature intended from the start. It gave Robinson the ability to tell a variety of stories from Opal City's past, each with guest artists. So it's like an anthology within a series, and also gives the regular artist a break. I think the choice to leave them out of the original trades and collect them separately was a mistake.

A late, last comment (I was out-of-town all last week). "A Day in the Opal," originally in Starman #4, was quite a story. Not only does The Shade present a lot of information to Jack and the readers but the Magical Hawaiian Shirt is a delight, especially the ending.