AHOY Comics's first publication is coming out today: The Wrong Earth #1, by Tom Peyer and Jamal Igle. It looks like an absolute blast: The Silver Age version of a character (Dragonflyman) is transported to the dark, grim-and-gritty world of a later iteration of him (The Dragonfly) -- and vice-versa. Essentially, it's as if Batman 66 and The Dark Knight swapped places.

But there's also a backup featuring the "Golden Age" Stinger, and a prose story by Grant Morrison! 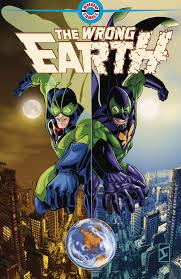 It's a book I'm super exited to read -- not least of which is because in issue 3, in the text story slot will be a short story by me!

But for now, here's the first issue cover... if you're heading to the comic shop, think about picking it up!

Congratulations on the text piece in issue 3, Rob! That's awesome!

Thanks, man! I'm just so happy to be writing fiction again! I can't wait for you all to read it!

"...if you're heading to the comic shop, think about picking it up!"

You talked me into it.

It was actually sold out in my store, so they're reordering. But I picked it up on Comixology in the meantime, and will be reading it tonight!

I bought it too, and I wouldn't have looked at it otherwise. My backlog is pretty heavy, but I will try to say something about it as soon as I do get around to reading it.

...I asked at LCD, saw, bought, liked! Nice to see a new company with some apparent money behind it, incidentally. I have not read #1's back-of-book text pieces.

I picked up The Wrong Earth, happily. Many moons ago, I worked with the AHOY Comics publisher, Hart Seely, a fellow ink-stained wretch. He was the kind of reporter other reporters wanted to be.

I well remember a great feat of narrative he pulled off: For a special section commemorating the founding of the newspapers for which we worked, the Syracuse Post-Standard and the Herald-Journal, Seely wrote a piece detailing 24 hours in the life of a daily newspaper. So they picked a typical, ordinary, random day; his challenge was to make it exciting.

The typical, ordinary, random day they picked for this experiment just happened to be the day after Lucille Ball died. And as all news is local, there was a local angle; her hometown was Jamestown, N.Y., within the newspapers' circulation area. And one of the two major department stores in town bought the other one, which the newspaper learned about because the one department store suddenly canceled all of its advertising. And there was a police matter than turned into a hostage situation that lasted all day, although, fortunately, it ended peacefully and with no loss of life.

Nice to hear Hart Seely's branched out into comics. As it states in the Editor's Notes in The Wrong Earth:

AHOY is not that big an adjustment for him; journalism and comics are more alike than you think. Both reduce the burbling slop of human experience to easily digestible forms. Both use words and images. Both involve working under deadline. But comics have to be accurate.

The Editor's Notes also invite readers to speculate on why the company's name is "AHOY." As a former fellow co-worker of Hart Seely, I know the answer. But feel free to speculate. Send your guesses to letters@AHOY.com! They promise to print the funny ones.

I really enjoyed the book. The writing in the 60s portion (Earth Alpha) is so playful, that it was almost jarring when we got to Earth Omega and we see the fight scene play out with little more than grunts and screams. It really drives home the difference between the two styles. But in a lot of ways, this issue is mostly setup; I'm really looking forward to seeing these characters interacting more with each others' worlds.

The Grant Morrison prose story is a hoot, too, turning a lot of tough-guy adventure cliches on their head.

I haven't read the Golden Age Stinger story yet, or either of the interviews...but I love that there's so much to enjoy in this comic!

Picked this up off Comixology and quite enjoyed it.  Thanks for the heads up Rob.

Looking forward to your piece.  Congrats!