Thought maybe I'd just make this an undated, running thread -- and just date the entries as the weeks turn.

Of the books I've read so far, Flash 7 is my favorite -- I loved Flash running through the wormhole, the promise he made to Snart (and the resolution of that promise), an interesting wrinkle in what will likely wind up being the Golden Glider's origin, the hint at Captain Singh's love life, and more. I liked Iris going through the wormhole -- it'll give Barry some alone time with her (though I'm by no means anti-Patty). And I'm looking forward to Turbine, next issue!

All-Star Western never disappoints, either -- the lead story made good use of Hex's origins and I like the gladatorial scenario. And the backup art had a real John Severin feel to it, which I appreciated -- and I liked the look at Nighthawk's background, as well. My one quibble was that I couldn't tell if Cinnamon was wearing a mask or not -- in some places, it looked like she wasn't drawn wearing one, but the colorist might have been trying to fix that.

Aquaman, sadly, I'm thinking of dropping. It's good -- objectively a good comic, I think, well drawn and exciting in parts -- but it isn't really connecting with me. Maybe it will in trades, sometime down the road.

New Deadwardians: I was planning on waiting for the trade with this one, but I decided to give a single issue a chance. I love the mystery it sets up, and I love the low-key nature of the supernatural here. It's well worth checking out.

Legion of Super Heroes: Secret Origin wrapped up with a nice moment for Phantom Girl, in particular. That said, I'm not sorry to see it go. While it approached the formation of the Legion in a different way than I'd ever seen before, and Chris Batista delivered some nice Ernie Colon-inspired work, the book as a whole was kind of flat. I much prefer the modern-day Legion, with characters who have a long history behind them.

Still to come: Daredevil and The Unwritten.

Permalink Reply by Jason Marconnet (Pint sized mod) on September 21, 2012 at 6:44am
Daredevil was probably my favorite of the week. It was a tense, jam-packed issue.

Rounding out the week's books:

Unwritten features a turning point for one of the main characters, and it's a doozy. It'll be very interesting to see where things go from here. As always, Carey and Gross are completely in control.

Revival #3 was a solid third installment, though I think I need to reread the first three altogether to "ground" myself in the series again. There's one character -- arguably the driver of much of this issue's plot, though barely seen here -- whom I'd forgotten who he was until the last page. Stupid old age getting the best of me, I think. But I'm enjoying the look at this very normal little town that has something so abnormal going on at the heart of it.

The rest of Dark Horse Presents 16 was its usual mixed bag -- but as always, the stuff that interests me pretty far outweighs the stuff that doesn't (say, Sam Keith's "Aliens" story, but even that had an intriguing cliffhanger). Getting only eight-page installments at a time blunts certain features (like "Concrete Park.") Highlights include "The Girl With Keyhole Eyes" (a meandering reminiscence of the narrator's life, as he tries to remember who the titular girl is... it's by David Chelsea, drawing a lot like Rick Geary, and it's a lot of fun, though very shaggy dog), a grisly one-shot Poe adaptation by Richard Corben, a new installment of "Finder," my favorite regular feature in the title, and another installment of the slow-creeping horror story "Riven." Also, there's a great little reminiscence of someone's career as a radio DJ. But my favorite episode in DHP this month is "Buddy Cops," about a intergalactic law enforcement officer demoted to the NYPD, where he's partnered with a by-the-book android programmed in the 1970s. There've been three episodes so far, and each is great, but they've been getting better and better... and the one in this issue is the best yet. Very silly, very funny, and perfect for the 8-page format.

Rob, I’ve been meaning to tell you (since way back in March… Yow!) what a good idea for a thread I think this is. (I think it’s a good idea, then I wait six months to respond to it. Does that make sense?) Some weeks I’m busy and some weeks I simply don’t have anything to say, but I’ve got two from last week.

THANOS: FINAL THREAT: This is a reprint of (what would have been, in any other medium), well… just what the title promises. It’s the last big two-part blowout Jim Starlin had been building toward, crossing over from Marvel Two-In-One Annual #2 to Avengers Annual #7. I didn’t buy it myself because I have it reprinted many times over, but if you’ve never read it, you own it to yourself to check it out if you are at all into superhero comics. Don’t worry if you haven’t read Adam Warlock’s solo stories leading into the finale; I hadn’t either at the time I first read it.

JUSTICE LEAGUE #0: This is the origin of Geoff Johns’ and Gary Franks’ DCnU version of Captain Marvel. (Wait, better scratch that… he’s actually known as “Shazam” now.) I can’t say I liked it very much. I can see where they’re going with it, but currently Billy Batson is not a very appealing character. The first thing he does with his powers is to vandalize someone’s vehicle, and in the process of stopping a mugging, he vandalizes another car. He is immature and thoroughly unlikeable, the kind of punk who’s in need of a good @$$-kicking.

And why did they make Freddy Freeman a blond?

Ha, Jeff, I only get to it once every three months or so, myself!

As for the changes to (sigh) "Shazam," I mentioned up above that it delights me, and I want to unpack that a bit. Because my every instinct is telling me that this is the WRONG way to handle Captain Marvel... and yet, I'm interested in this kid. I like this Billy, or rather, I like reading about him. He's a bit of a dick, but at the same time he does care for his friends, and doesn't like to see people being taken advantage of... and yet is also willing to do it himself. ("I am a little low on funds...") Billy Batson was always a simple character -- intrinsically good, with strong morals and ethics. (Which is just what those wonderful stories called for.)  And this kid... well, I think he's also intrinsically good, but ethically lazy -- or opportunistic, because (my impression is) he's always had to be to survive.

And now we see what happens when he gets incredible power. So far, he's misusing it, a bit, even as his instincts direct him to step in to help someone (he doesn't do that for reward; the reward occurs to him later). But will he turn around?

It occurs to me that we're looking at an extended secret origin of Spider-Man, but in Captain Marvel drag. Billy's gotten great power... but we don't know how he's going to learn great responsibility.

I don't know how well this story would work for me in other hands, but Johns and Frank are both top talents, and I'm riveted. Despite myself, really.

These aren't classic Captain Marvel stories, and I do hold that against the series, try as I might not to. But at the same time I'm fascinated by it, watching it try to do something new within the context of the New 52 Universe. And the last line -- "We're going to be RICH!" I found hilarious, probably because I have such confidence in Billy (and Freddy,actually) that they'll balk when they realize what it takes to use their powers to enrich themselves. I have faith in them, even if they don't realize their own goodness yet.

PS. Also, up above, I notice I said "Daredevil was a decent read" in my paragraph on DCU Presents. Meant to say "Deadman," as was hopefully obvious.

Thanks for pointing out your comments on JL #0; I missed ‘em earlier. I’ll agree with you that the new costume is way, way, WAY too busy. I agree, too, the DC needs to reprint more of the C.C. Beck era. Heck, four volumes doesn’t even get into the really prime material! 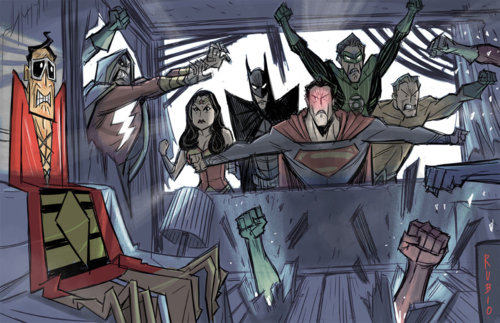 Love this from Pixar artist, Bobby Rubio.  The new 52 has gotten to everyone...except Plas!

That is pretty great.

Well, I, for one, intend to keep this thread active. Great idea!

Ha, Jeff, I only get to it once every three months or so, myself!

My impressions of this week's books, so far:

Flash 0: First of all, very, very glad to have Manapul back on art. This issue deals in large part with the murder of Barry's mother, Nora, allegedly by his father, Henry. We see a little of the Allen home life immediately before the murder. Looks like a divorce was in the offing, if I'm reading correctly between the lines. But also, we get to see Barry making his costume (even if the science behind it is iffy) and get to see him go into action, too. Also, we get a much more complete look at his relationship with Captain Frye.

Batman Inc. 0: Chris Burnham co-writes with Grant Morrison this look at the early days of Batman, Inc., and we get a lot of glimpses of how various members were recruited -- including a Russian Batman I don't think we've seen before. I like the characters we see, and especially appreciate another glimpse at Man-of-Bats, but (here's a shock) Spoiler and Blackbat are noticeably absent. I like the burgeoning relationship between Squire and another member of Batman Inc., though! Frazier Irving's art is tremendous; no surprise, that.

The Goon 42: Just as I finished extolling the virtues of The Goon as a done-in-one book, it looks like we're entering an extended series. Not that this issue and the last don't hold up on their own quite well, but there are threads that connect them -- even beyond the continuing monster-fight backup drawn by Mark Buckingham. This issue is a bunch of fun, with a mix of boxing and witchcraft, but on it's own, it's not as strong as the series can be. That said, it's still a bunch of fun, and Powell gives us some wonderful images here -- including a classic fashion-disaster panel where the Goon has to borrow some clothes.

Still on deck: Superman Family Adventures, All-Star Western, Mind MGMT, New Deadwardians, Happy, and even Wolverine and the X-Men, which has a done-in-one that looked too fun to pass up.

Just read All-Star Western 0 -- it looks like Hex's history is intact, at least as established in the Jonah Hex series prior to the new 52. We see some more of his home life as a kid, and the circumstances of his birth -- and then it's covers much of the same ground as the flashback issues of Jonah Hex did. But the final few pages establish that Hex himself is telling this story, to a man with some contact with Dr. Henry Jekyll -- so we're likely to see some shenanigans in that regard, which is likely to tie in with the Black Diamond stuff, as well. But even more happily -- and something I won't spoil outright -- is the character who shows up on the last page. I've been hoping to see her again, as she's one of my favorite characters created for the New 52.