I picked this up since I was a fan of the old Ultraman TV show when I was a little kid. This story is a direct sequel to the original series, ignoring the myriad subsequent Ultra-series.  Earth has been at peace for the several decades since Ultraman went back to wherever it was he came from. Shin Hayata, Ultraman's human host,  eventually retired from the Science Patrol, married, had a son, and rose to become the Minister of Defense. Shin no longer remembers his time as Ultraman, although since he retains a certain measure of super-strength, I have to wonder where he thinks this power came from.

The protagonist of the story is Shinjiro Hayata, Shin's son, who has inherited Shin's super-strength. His father is aware of this, but, oddly, never discusses it with him. Shinjiro hides his powers until one day he decides to try to impress a girl who's being bullied by some older boys, and accidentally cripples one of them.

The third major character is Mitsuhiro Ide, a member of the Science Patrol from the old days. He runs a sort of "Ultraman Museum". At one point, he reveals to Shin that hostile aliens have begun to take an interest in the Earth again, and that the museum is actually a front for the continued research of the supposedly long-disbanded Science Patrol.

The fourth major character is Bemular. In the old show, Bemular was the first monster Ultraman fought.  Here, he's a human-sized alien who confronts and attacks Shinjiro.  Shin (who has remembered that he was Ultraman*) defends his son, and sends him off to safety at Ide's museum. Ide reveals to Shinjiro that they've built an exo-suit to help magnify and control his powers, which may one day surpass Shin's.  Shinjiro dons the suit and rushes to confront Bemular, who is beating the crap out of the now somewhat elderly Shin. Shinjiro manages to drive Bemular away, but is left with more questions than answers.

I enjoyed this book. The art is pretty good, it suits the subject matter. The exo-suit only vaguely resembles the original Ultraman outfit, but it looks OK. So far, the action has been kept at a human-sized level, I'll be curious to see if that continues. So far, it's been a standard, "Kid discovers that he's the secret heir to the legendary hero" story, but I feel that it's reasonably well-handled. I'm looking forward to seeing more of this.

*Ide reveals that back in the day, the Science Patrollers all knew that Shin was Ultraman, but kept quiet about it for Shin's sake.  I'm personally OK with this revelation. It makes sense to me.

I stopped reading this series with volume three, but I continued to buy it. Bob stopped reviewing it with #9, but I have up through #12. I have recently started watching the Ultraman TV show again, and that has put me in the mood to delve into this manga again, so I’m bumping it up to the top for easy access while I read. Now that I have a better idea of what to expect (more Japanese Iron Man than dai kaiju), I think I’ll be more likely to finish it this time. At this point I’m two issues in and am enjoying it more than I did the first time around. Part of the reason is due to expectations, as I mentioned, but also it has to do with pace. Despite their thickness, these volumes are very quick reads. Now that I have a stockpile, I’ll be less likely to “lose” the story between installments.

I didn't know 11 and 12 were out yet.  I went through a period where my manga budget was zero, and I'm only slowly catching up. I'll re-read 10 at some point. 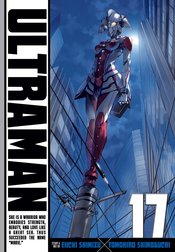 Cool, I'll keep an eye out for it.  I need to re-read the last few volumes first.

In the episode of Ultraman Tiga I watched last night, Tiga (as Daigo, at first) time-travels to 1965 where he encounters the original Ultraman. At first, Ultraman is human-size and interacts with Daigo using speech. It put me in the mood to get caught up on the manga, then I noticed this morning that v17 ships this week. Synchronicity! 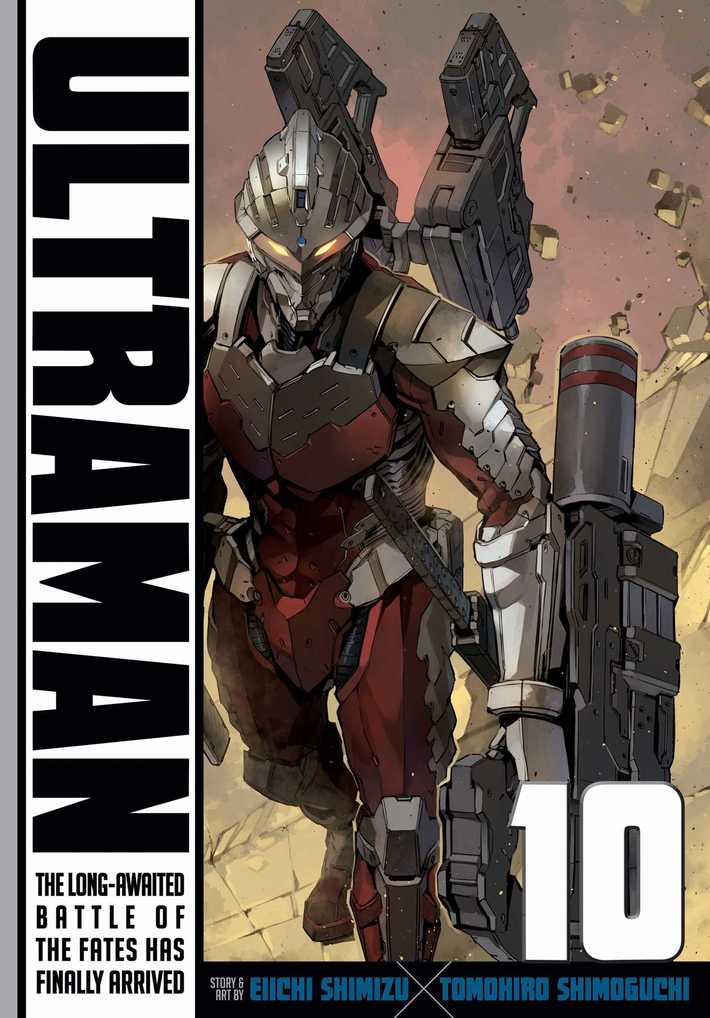 Our heroes head to NYC, where the Star of Darkness types announce that they're going to release a gas which incites violence. After violence ensues, the heels reveal  that there was no gas, and it was all a scam to show other aliens how violent the Earth monkeys are. Our heroes - Shinjiro, his Dad, Dan, Taro, Hokuto and Jack all arrive, saving Rena froma gang and defeatng a mecha called the Golden Fortress.  The volume ends with our heroes ready to battle the Star of Darkness.

Not bad, lots of good action in this.  I do still find that the armors all look enough alike that I sometimes have trouble telling who the heck is who. 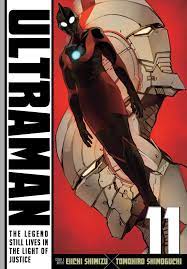 The Ultramen defeat the Star of Darkness.  The last surivivor is their leader, who claims that he is serving a higher power who has a much greater goal than merely conquering Earth. He then goes berserk, forcing the heroes to kill him.  Elsewhere, the Star Council decide that Adad has betrayed them, and send the Leo Borthers to deal with him.

Another battle issue which looks to be leading into new developments.  These kinds of manga do tend to devote large numbers of pages to fights. 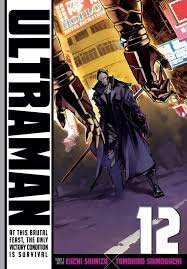 The Star Cluster Council  tells the people of Earrh that the Ultra race inadvertently damaged spacetime, and that they're working to fix it, but if they can't, they have a contingency plan to shift Earth into another dimension.  Adad battles the Leo Brothers in Hong Kong, and Dan races to his aid.  Elsehwwere, Red has a "disagreement", and Shinjiro races to his aid.

Interesting developments.  The plight of the refugees is well-portrayed as they are confined to a sort of "alien ghetto".  Again, lots of lengthy fight scenes, whoch I feel would be shorter in an American comic.

Shinjiro and Red join Don and Adad in hong Kong to help them against the Leo Brothers. The Star Cluster Council sends a giant teru teru bōzu to eliminate them all. Don and Shinjiro opt to oignore orders and stay and fight it.

We learn that Edo is the Supreme Chairman of the Star Cluster Council and that Rena is not an "Earthian".

The Leo Brothers join up with the SSSP and reveal that the business about the damage to spacetime was a lie and the the Ultra race are condiered evil because they impose their ideals on the universe.

Taro investigates a murder in Missouroi that my be alien-related.

While Shinjiro ponders whether the Ultras might be evil, Rena shows up  at HQ to visit him.

Some interesting developments here, I hadn't expected the Star Cluster Council to turn out to be shifty, I'm interested to find out what they're up to. 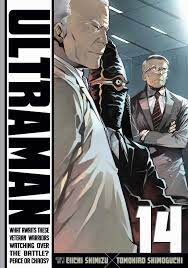 Aliens are hunting humans as part of the alien equivalnet of a TV show to  amuse welthy alien refugees.

Elsewhere, in a scene that's all "teen romance", Rena tells Shinjiro that she thinks she has super-powers.  Later, one of th Ultras tries to warn her about them.

Meanwhile, the SSSP, the cops and a mysterious "scientific research institute" led by Shiro Maki (who is reveaaed to be an alien) are investigating the alien murders.

Taro comes to Japan and confronts the murderers, all of whom flle except for the hostess, Valky, an agent of the Star Cluster Council.  Taro and Valky fight.  She kisses him and then flees.

Edo reveals that the "hits" on Adad and the Leo Brothers have been called off.

Some interesting twsits and reveals, here.There's lots or references to and re-imaginig s of characters from various Ultra shows innhere.  I'm sure that I'm missing lots of them. 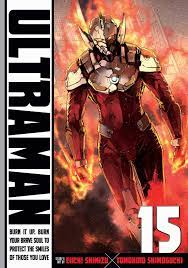 Valky once again approaches Taro. Dan talks to Shnjiiro about whether or not the Ultras are evil. Impostior Ultramen battle Taro and the Leo Brothers. The impostors take a hostage, who is freed by Adad and Bemular.

Sin, Shinjiro and Dan are held prisoner by Mephisto (a.k.a. Mefilas), who is acting on behalf of the Council., in order to discredit the Ultras.He calims that all the aliens that invaded Earth in the past did so on the Council's orders. Edo arrives and free Shin, Shinjiro and Dan, while revealing to them and Mefilas that he's the Supreme Chancellor of the Star Cluster Council.

Curiouser and curiouser, as Edo seems to be acting against what people are saying the Council's motives are. Someone seems to be playing a double game, but who? 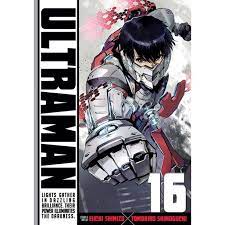 After freeing Shin, Shinjiro and Dan, Edo tells them that Mefilas has been lying to them.  They go to join the others, and they all defeat the  now-unmasked Impostors easily.  Back at HQ, Edo tells them thatx even though he is the Supreme chancellor, he is the Council's puppet, and that he is working to subvert the Council's plans.  He also mentions that there is a faction of the Council that wants to destroy the Earthians' faith in Ultraman.

Elsewhere, Bemular talks to Endo (Rena's dad), and we learn that Rena was the daughter of two illegal (space) aliens who were friends of Endo's, and who were  "killed during a burglary" by the authorities, and that Endo subsequently adopted her.

Since Rena is developing super-powers and is frequently involved in alien-related incidents, Bemular gives Endo a watch to pass along to her.  The watch has a button on it that Rena is only to press in an emergency.  Rena being Rena, the minute that she's alone, she presses the button and is turned into an Ultra(wo)man!

Still not sure if Edo is trustworthy or not.  He comes across as one of those "master manipulator" types who never tells anyone his real plans.  Also, kind of sumb of Bemular and Endo to imagine that Rena wouldn't press the button on the watch.  I'm definitely looking forward to Volume Seventeen to see what shenanigans ensue.

The Baron replied to Steve W's discussion A Cover a Day
"When I was a kid, my parents would take trips to Canada to visit friends of theirs, and would bring…"
59 minutes ago

Richard Willis replied to Emerkeith Davyjack's discussion All-purpose newspaper strips discussion
"Looking at the stripes on the Schulz Museum site, I asked myself how I missed Crankshaft. I was…"
6 hours ago

Richard Willis replied to Emerkeith Davyjack's discussion All-purpose newspaper strips discussion
"This one gave me a real kick. I'm adding the strip to my King Features favorites."
6 hours ago

ClarkKent_DC replied to Jeff of Earth-J's discussion DC's 1st Issue Specials
"It was the '70s. Back then, female police officers wore skirts (albeit not miniskirts) as…"
8 hours ago

ClarkKent_DC replied to Jeff of Earth-J's discussion DC's 1st Issue Specials
"It was the '70s. Back then, female police officers wore skirts (albeit not miniskirts) as part…"
8 hours ago

Philip Portelli replied to Jeff of Earth-J's discussion DC's 1st Issue Specials
"METAMORPHO: I never saw him as a comedic character, having never read most of his Silver Age run.…"
9 hours ago

ClarkKent_DC replied to Emerkeith Davyjack's discussion All-purpose newspaper strips discussion
"Well, this time there WAS a place to see the entire collection, at the Charles M. Schulz Museum…"
11 hours ago

Jeff of Earth-J replied to Jeff of Earth-J's discussion DC's 1st Issue Specials
""...to be fair if this had been 'Dude Cop'? My interest level would have been the…"
12 hours ago

Jeff of Earth-J replied to Rob Staeger (Grodd Mod)'s discussion Stargirl (now on Season 3!)
""I commented elsewhere that Starman is thoroughly unlikeable (and yes, Joe McHale is perfect…"
12 hours ago