I picked this up since I was a fan of the old Ultraman TV show when I was a little kid. This story is a direct sequel to the original series, ignoring the myriad subsequent Ultra-series.  Earth has been at peace for the several decades since Ultraman went back to wherever it was he came from. Shin Hayata, Ultraman's human host,  eventually retired from the Science Patrol, married, had a son, and rose to become the Minister of Defense. Shin no longer remembers his time as Ultraman, although since he retains a certain measure of super-strength, I have to wonder where he thinks this power came from.

The protagonist of the story is Shinjiro Hayata, Shin's son, who has inherited Shin's super-strength. His father is aware of this, but, oddly, never discusses it with him. Shinjiro hides his powers until one day he decides to try to impress a girl who's being bullied by some older boys, and accidentally cripples one of them.

The third major character is Mitsuhiro Ide, a member of the Science Patrol from the old days. He runs a sort of "Ultraman Museum". At one point, he reveals to Shin that hostile aliens have begun to take an interest in the Earth again, and that the museum is actually a front for the continued research of the supposedly long-disbanded Science Patrol.

The fourth major character is Bemular. In the old show, Bemular was the first monster Ultraman fought.  Here, he's a human-sized alien who confronts and attacks Shinjiro.  Shin (who has remembered that he was Ultraman*) defends his son, and sends him off to safety at Ide's museum. Ide reveals to Shinjiro that they've built an exo-suit to help magnify and control his powers, which may one day surpass Shin's.  Shinjiro dons the suit and rushes to confront Bemular, who is beating the crap out of the now somewhat elderly Shin. Shinjiro manages to drive Bemular away, but is left with more questions than answers.

I enjoyed this book. The art is pretty good, it suits the subject matter. The exo-suit only vaguely resembles the original Ultraman outfit, but it looks OK. So far, the action has been kept at a human-sized level, I'll be curious to see if that continues. So far, it's been a standard, "Kid discovers that he's the secret heir to the legendary hero" story, but I feel that it's reasonably well-handled. I'm looking forward to seeing more of this.

*Ide reveals that back in the day, the Science Patrollers all knew that Shin was Ultraman, but kept quiet about it for Shin's sake.  I'm personally OK with this revelation. It makes sense to me.

I considered dropping it, but I forgot to cancel my pre-order. (My LCS doesn't generally carry manga because it doesn't sell for him.) I don't think I'm enjoying it quite as much as you are, but if this is going to be a series of finite length, I'd just as soon have the whole story than just the first four issues of it. Thing is, I don't know if this series in finite or ongoing. In any case, I'll stick with it until the end (if finite) or a good stopping point (if ongoing).

According to the ever-reliable Wikipedia, there have been seven volumes released in Japan:

Haven't found any word on how many volumes they are planned for ultimately.  I'll dropped it if/when it ends or ceases to entertain me.

I can stick it out for seven issues. If it goes beyond that, I can handle two volumes a year, too.

I tried to find this discussion last issue, but I think I was looking in your forum. Don't remember what I was going to say, now. 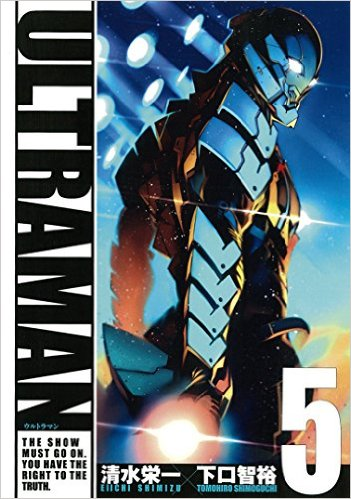 The battle in the arena continues. The alien fanboy intervenes, and it turns out he's an alien prince. Adad reveals the truth behind the killings, that it was humans who hired the prince to kill.  Endo goes to Ide at the Science Patrol, trying to get his help. Later, at Shinjiro's school, a first-year called Hokuto shows up, claiming to know that he's Ultraman. We see later that Hokuto has beaten up several adults, claiming to be very strong. Shinjiro meets Rena again, and later we see that Hokuto appears to be another Ultra.  In the original Ultraman continuity, Seiji Hokuto was Ultraman Ace, so maybe there will be several Ultras. Hokuto taps Shinjiro's phone and listens in on his call with Ide.  Shinjiro goes to another monster fight, and meets a new Ultraman (presumably Hokuto), who greets him as a brother.

Still quite interesting. Hokuto seems a bit unstable. so I'm curious to see how they develop his character. 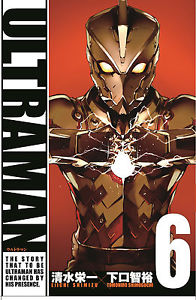 Ultraman/Hokuto takes off after the monster fight, as Shinji begins to suspect his ID. Rena shows up at Science Patrol HQ and Shinjiro wonders how she'd react if she knew he was Ultraman.  Shinjiro and Moroboshi show up at another monster sighting , only to find that Hokuto has finished him off.  Hokuto unmasks and asks to join the Science Patrol. Meanwhile the two detectives find a warehouse full of unidentifiable bodies.   Shinjiro tells Rena that he knows how to contact Ultraman. Then he confronts Hokuto as he is shaking a guy down for cash.   Shinjiro and Hokuto fight, with Shinjiro getting the worst of it. Moroboshi intervenes, and apparently beheads Hokuto!

OK, that I did not expect. It's hard to think that they've killed off Hokuto just like that, so I'm expecting some kind of a swerve coming. 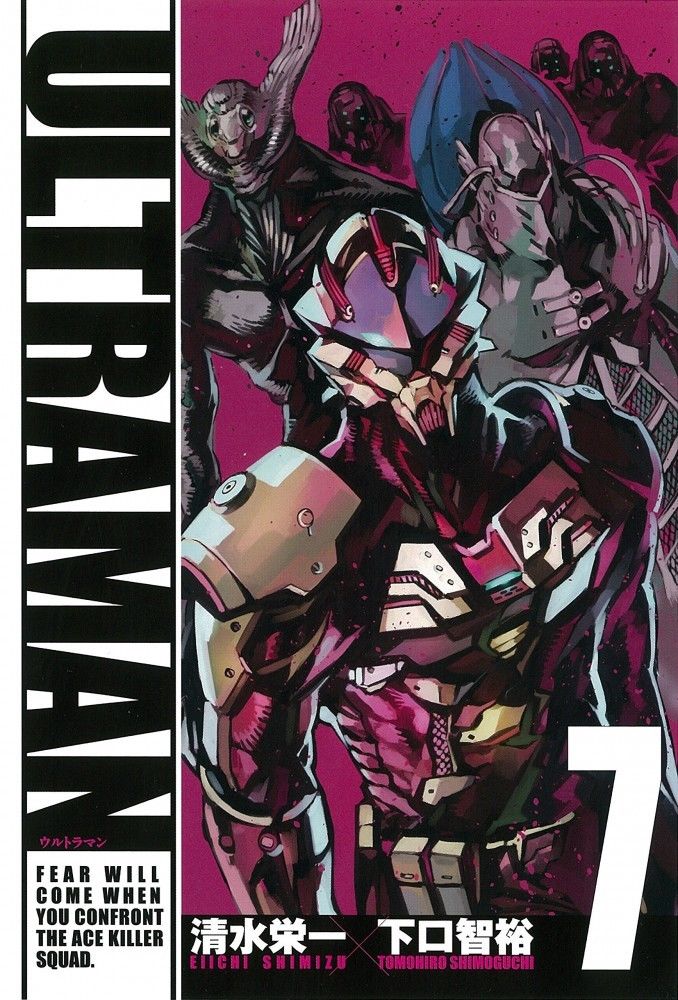 Hokuto was not beheaded, only had his helmet knocked off.  Meanwhile, the SSSP is investigating footage that shows that Bemular was on Earth years before he was known to have been.  It also  involves an airplane crash in which Hokuto's family was killed.  Some hitmen going after Hokuto attack Moroboshi and Shinjiro. Shnijiro's dad - the original Ultraman, also gets an armor suite, and joins in the fight. Durinmg the fight, Hokuto snaps and is ready to mow the hitmen down.

Still holding my interest, but Ihave to say that when there's four Ultramen in a battle, I can't always keep clear on who is who.

Volume 8 (the last) shipped (to my LCS, anyway) last week. Now that the series is complete, I’m going to delve into it again. Although much thicker than an America comic, these volumes are quick reads, and I found I was “losing the story” between issues. Now that I know in advance what to expect (more “Iron Man” than kaiju), I find I’m enjoying it more. I had forgotten how faithful the flashbacks to the TV series in volume one were. I re-read the first two volumes at this point (I previously left off after three), and am enjoying it more the second time through. 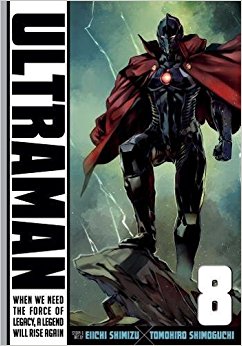 The big fight concludes as Shinjiro overrides his power limiter, saving Hokuto.  Shinjiro reveals his ID to Rena's dad, but then pretends he was kidding. There is word of a new group threatening Earth called "The  Star of Darkness".   We shift to New York City three months later, where a Japanese photographer named Kotaro and his friend Dave witness a bank robbery.  Kotaro believes the robbery was a front for an alien plot.  Later, he is assaulted and exposed to a strange chemical.

An interesting turn of events, it feels like a shift to a new story arc.  I had originally thought that this was going to be the last volume, and was confused, because this did not feel like a wrap-up. Now, that I know it's continuing, it makes more sense. 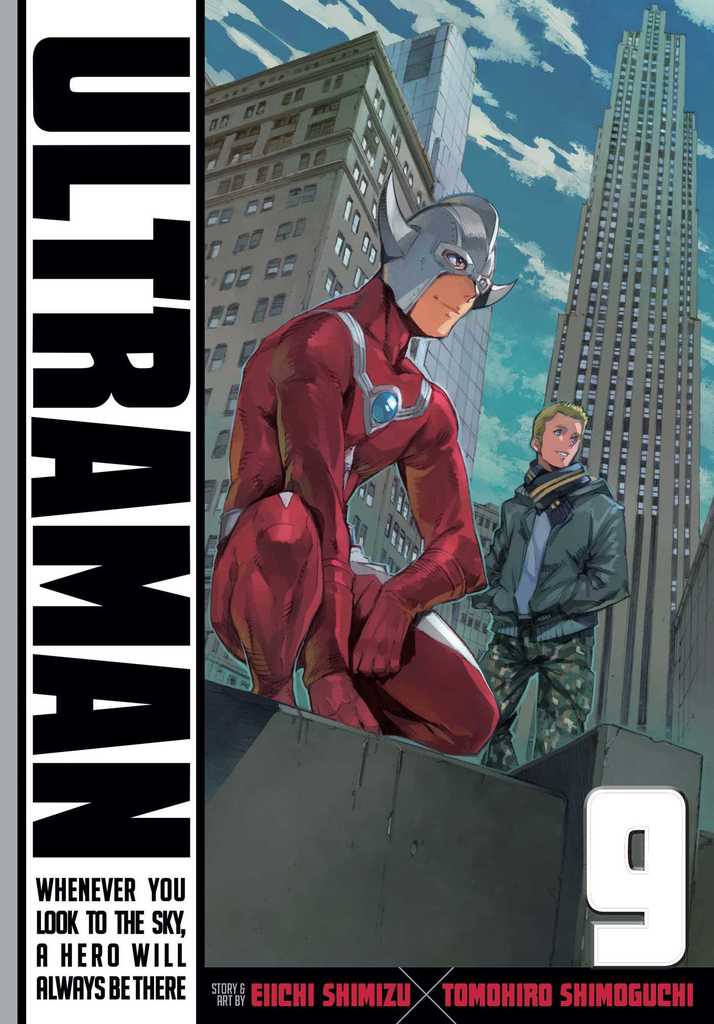 In NYC, Kotaro discovers that he's gained super-powers from exposure to the alien chemical, After stopping a mugging, he decides to become a super-hero. In Japan, the SSSP becomes aware of Kotaro's existence, and Rena tells Shinjiro that she's leaving for America.  Back inNew York, the Star of Darkness takes Dave hostage in order to draw out Kotaro. Kotaro fights them off, but Dave is killed. As Rena arrives in the city, the Star of Darknes spublicly announces their invasion.  Kotaro announces his intention to go on being a hero, re-naming himself "Taro"

An interesting new direction. Taro's origin feels more like the  origin of a Marvel super-hero, I wouldn't be surprised if this was intentional. I'm definitely interested to see where this new story-line goes. 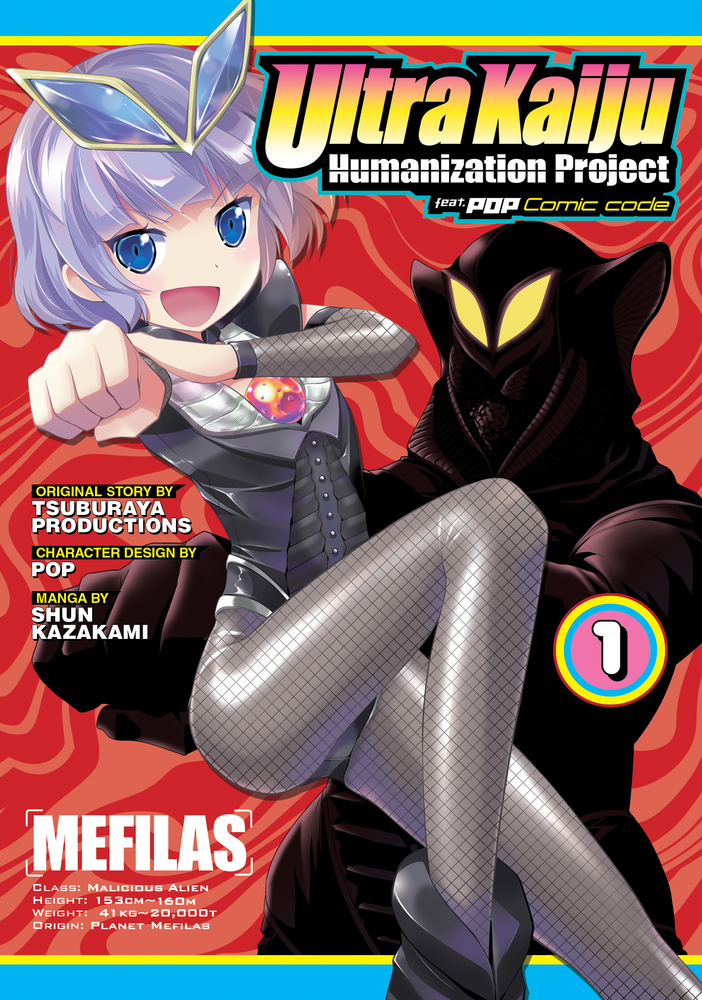 Update for Ultraman fans: There is now a manga in which monsters that are defeated by the various Ultramen are reincarnated as high school girls attending the Kaiju Graveyard School.

I knew you'd want to know.

Luke Blanchard replied to Jeff of Earth-J's discussion Tales to Astonish
"I think this was where Marvel first used the "never ending story" approach."
1 hour ago

Richard Willis replied to Jeff of Earth-J's discussion T.H.U.N.D.E.R. Agents
"ISSUE #4: RAVEN: A hostage situation at the New York Stock Exchange, but the "hostage"…"
2 hours ago

Jeff of Earth-J replied to Jeff of Earth-J's discussion T.H.U.N.D.E.R. Agents
""This was me trying to be funny." I thought that might have been the case but i…"
5 hours ago

Jeff of Earth-J replied to The Baron's discussion Movies I Have Seen Lately
"DR. NO: I'm gearing up for Cap's book/movie discussions, but he's following book…"
5 hours ago

Jeff of Earth-J replied to Steve W's discussion Comical Comic Cuts
""Can anyone come up with a caption?" I can go you one better. Here's the…"
8 hours ago

Richard Willis replied to Jeff of Earth-J's discussion T.H.U.N.D.E.R. Agents
"Captain Comics said: I think the Companion works best as something to read. A lot of mini…"
9 hours ago

Richard Willis replied to Jeff of Earth-J's discussion T.H.U.N.D.E.R. Agents
"Jeff of Earth-J said: I suspect that another scene was intended for pp.11-12 and was dropped at…"
9 hours ago

Steve W replied to Steve W's discussion A Cover a Day
"I'm with Jeff and Peter for April and May."
9 hours ago

Steve W replied to Steve W's discussion Comical Comic Cuts
"Ok, so this pic doesn't actually have any script to go with it, but I still thought it funny.…"
10 hours ago