Villains Who Lucked into Their Devices

Captain Cold: In SHOWCASE #8, Len Snart is introduced as a scientifically-savvy crook who wants to find a way to stop the Flash. He invents a gun to use radiation from a cyclotron. He then essentially walks into a “Radiation Laboratory” which apparently has only one security guard. Being “unfamiliar with the workings of the cyclotron”, he makes a mistake that causes the gun to be irradiated. Afraid of making a mistake that will injure him, Snart leaves with the gun. He then encounters the lone security guard. Not realizing the gun can actually do anything, he intends to scare the armed guard with it (often referred to as suicide by cop). He then accidentally presses the trigger, freezing the guard. With his limited scientific ability, he further modifies the gun before facing the Flash. In later stories he is able, Lex Luthor-like, to make cold guns in prison.

Dr Alchemy: In SHOWCASE #14, the incarcerated Al Desmond, formerly Mr. Element, hears about a “lucky stone” from his cellmate. He has figured out somehow that it is the Philosopher’s Stone of legend, which among other things can change substances into different substances. (As an aside, the book HARRY POTTER AND THE PHILOSOPHER’S STONE was retitled “…SORCERER’S STONE” for American audiences, who apparently can’t be trusted to learn new terminology.) He then digs himself out of prison with a spoon (what, not a Mr. Element trick?) and steals the stone from his cellmate’s home. He abandons his Mr. Element persona, based upon life-long scientific study, in favor of the magical Dr. Alchemy identify. After Flash hands his head to him and tosses the stone into space, Desmond returns as Mr. Element in later stories.

Mirror Master: In FLASH #105, the incarcerated Sam Scudder is helping to manufacture mirrors(?) when he accidentally makes a mistake with the silvering of a mirror. After being chewed out, he notices that the angry foreman’s image is frozen on it. After being released from prison he “examines” the mirror and figures out how to capture images of people and to create what appear to be three-dimensional figures of people and monsters to aid in his robberies. In later stories he employs the mirrors for increasingly wilder uses.

Tattooed Man: In GREEN LANTERN #23, Abel Tarrant, a criminal who is also a merchant seaman, is robbing a chemical company when chemicals are spilled courtesy of flying bullets from him and a security guard (both firing in the dark at no clear target!). While attempting to elude the guard, Tarrant finds chemicals pooling on the floor. One puddle looks like a bomb. When he touches it and desperately wishes it was a real bomb, it actually becomes one. After using it to escape he returns later and sops up the unknown chemical puddles. He later figures out that if he can draw something using the chemical like ink it becomes real. Then he proceeds to draw temporary tattoos on his body and use them as weapons. At least he didn’t become an expert scientist or magician in the bargain.
Weather Wizard: In FLASH #110, Mark Mardon escapes on his way to prison and makes his way to his brother’s lakeside home, which turns out to be mostly a scientific laboratory. He finds his brother dead from natural causes. All broken up (NOT) he begins studying his brother’s notes about weather, and makes a “weather-stick”, becoming the Weather Wizard.
Don’t get me wrong, I have great affection for these stories. Does anyone know of other bad guys who stumbled upon their gimmicks?

We forgot Carl Sands - the Shadow Thief of Midway City. From the looks of him he could have almost been a Ditko villain. That being said, these Hawkman stories were some of the best Kubert work in my book 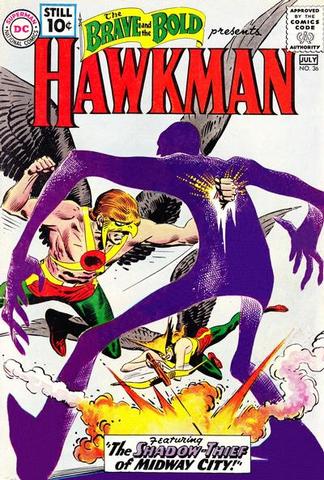 That's a superb cover, thanks for posting it. Artists Joe Kubert and Steve Ditko were a lot alike in many ways. I also see a lot Kubert in the faces of John Buscema's art.

I definitely see a common sort of tone - though on another level they also seem quite different. I always wanted to see what Joe Kubert would have done with Dr. Strange. He was certainly capable of doing that kind of metaphysical imagery. 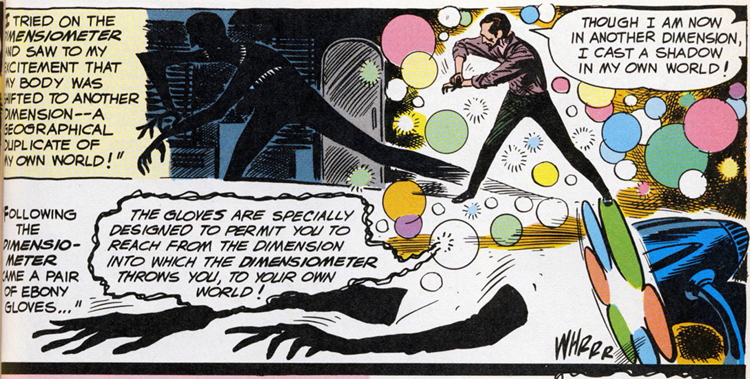 Robin,  outside of one complete reprinted AAF book in the 1980s-90s  Sears catalog offering "The BEST of Marvel Comics", I had not read any of that title either. I remember "Those Who Change" from the initial issue of Fantasy Masterpieces which I had coverless (ok, maybe it was the second issue).  And remembered it all these years later.  I knew they were reprinting short selected stories by various artists, but it confused me as a kid as they would talk about "Ditko's Those Who Change" or "I, Ororo" by Ayers, or "Kirby's Fing Fang Foom" and I couldn't understand why the artist was SO important. Nowadays, with accusations that Stan Lee never wrote anything, I'm seeing those early reprints as proof that the short monster stories were authored by the artists, and it was a form of giving credit to them.  From those early reprints, I also began to recognise the individual artists' styles and could spot their work on regular books...FF, Thor, Spidey, Dr. Strange, Iron Man, Avengers, etc.  And worse, I could spot a fill-in by another artist that "just didn't feel right."

These days, I took the plunge and invested in the Amazing Adult Fantasy Omnibus and have enjoyed it very much. I'm not sure I would ever spend $75 for any omnibus or collections, so I had to hunt long and hard to find a very marked down cut-rate price...and if you're interested in going that route, you can find some version of that or other Omnibus(i) as low as $40 or better IF YOU SHOP!  I considered AAF to be worth it, but it was an aquired taste, to be sure.

I was mistaken. It was a J.C. Penny offering.  And he's the cover.