What are the best Joker stories?

The ads for Gotham Season Two hint at the Clown Prince of Crown, but I think it unlikely we'll see him. Still, I'll probably write about him, and the better comic book stories he's been in.

So what are your favorites, Legionnaires? "The Joker's Five-Way Revenge?" "Joker Fish?" "The Killing Joke?" "Arkham Asylum?" Others?And why?

A favorite of mine is "Joker's Millions," from Detective Comics #180 (February 1952). The Joker inherits a fortune from some mobster and chooses to move into a mansion next door to stately Wayne Manor and becoming one of the idle rich. He makes a point of rubbing elbows with the upper crust, to the irritation of the social set and Bruce Wayne and Dick Grayson.

One night, as The Joker is tossing bundles of cash into the fireplace to keep warm, he discerns that some of them are fake! He then discovers that, indeed, his newly gained fortune is far smaller than he was led to believe, as most of it is counterfeit ... right before an agent of the IRS shows up with a tax bill that he can't afford to pay!

What to do? The Joker certainly doesn't want to go prison for non-payment of taxes, but he can hardly admit he's been pranked, either. So he decides to steal money and baubles to pay the bill -- but he realizes that he doesn't want to be fingered for any thefts, so he has to swallow his pride and steal without any fanfare! However, even when he tries to do things in an ordinary, anonymous way, circumstances contrive to make the thefts look like Joker-branded crimes, attracting the attention of Batman and Robin.

Maybe not the best one, but a personal favorite is "Dreadful Birthday, Dear Joker... !" from Batman #321. It was the first non-reprint Joker story I recall reading, as well as my first exposure to the art of Walt Simonson. 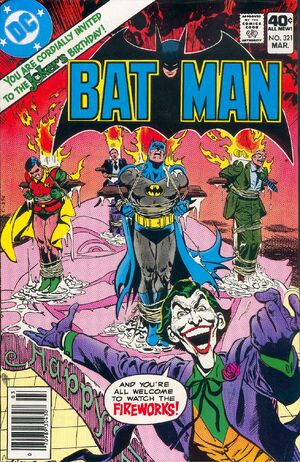 Maybe not the best one, but a personal favorite is "Dreadful Birthday, Dear Joker... !" from Batman #321. It was the first non-reprint Joker story I recall reading, as well as my first exposure to the art of Walt Simonson.

IIRC, this story was selected as one of the best of the year for one of DC's digest collections back in the early 80s.

I'd go with probably the first I read, his return (after his "death in Batman#1) in Batman#4 where he disguises himself as Pagliaccio and sings "Laugh, Clown, Laugh." Didn't read his "death" until decades later when I got the first Batman Archive.

I've read Bob Kane went through the Batman comics redrawing the faces to make the stories look like his work, so it may not be possible to figure out exactly how much he actually drew himself.