What are the greatest Hulk stories of all?

For a while after Ol' Greenskin's star turn in The Avengers, Marvel Films asserted that Hulk seemed to work best in group settings, so they had no plans for another solo movie.

But times have changed, and now they are talking about exactly that. But, honestly, third time isn't the charm if it sucks. So if Marvel Films does do another Hulk film, is there an existing Hulk story that provides the laughs, the angst, the pathos, the romance and all the other stuff needed to give it a chance?

IOW, what are the best Hulk stories ever done? Sing out, Legionnaires!

Permalink Reply by Ron M. on July 30, 2014 at 6:12pm
The problem is that's when he met Wolverine and they don't have the rights to him. I don't think Hammer and Anvil would make a good movie.

My personal faves with Hulk, not in order of preference, since it's been a long time:

2. Planet Hulk (and the one or two sequels)

4. And then there was one very old one, I loved it as a child, when Hulk leaps to an island and becomes friend with some old indian guy. I think there was some water central destroyed in that issue :)

I'm not familiar with that story. But then I've only seen about a dozen issues between #200 and #300, and gave up on Hulk when he took over the Pantheon, a group of characters I found horribly boring.

I wasn't very interested in the Pantheon either (although I enjoyed the art). But others did, and it seems I was missing something -- a reference, a parallel, something. I mean, I got that Greek mythology was the framing, but I didn't see why they wanted the Hulk along, nor did I really understand what they were doing, or how they'd existed for so long without anyone -- S.H.I.E.L.D., the Greek gods whose names they were using, the Eternals who also used those names, etc. -- catching on to their existence. And hey, you can't be terribly effective if no one can tell you've done anything.

But then again, I've confessed before that sometime during the Herb Trimpe era I stopped reading Incredible Hulk and just skimmed it, continuing to buy it for another couple of decades due to my Completist Compulsion and the fear I might miss some important reference to another character.  I didn't really read the Pantheon stuff so much as flip through it looking for a character I wanted to read about. Maybe some day I'll go back and re-read those books ... but not until I've read all the other stuff I'm more interested in.

But I did actually start to read Hulk with interest after Incredible Hulk itself stopped, and various other books and series happened -- like the ones Komic Brew mentions: Future Imperfect, Hulk: The End and especially Planet Hulk, which made me a Greg Pak fan.

I think the problem with getting the Hulk into his own movie series is that we need a good foundational movie to start him off.  We need to see his origin (again) and have someone spell out what it is about him that makes him so interesting.

The TV Series really did this well -- It's the story about a guy who wants to be left alone and gets drawn into conflicts that he doesn't want to be in. It's about his annoyance and frustration.

And most importantly, Hulk stories shouldn't be ABOUT the Hulk. They should be stories that have the Hulk thrust into them.

As for me, I'd point you out to two stories from the era I most enjoyed: This is one of my favorite Hulk stories!  Basically, it's the Hulk and Absorbing Man trapped on Easter Island. Synopsis here: http://www.comicvine.com/the-incredible-hulk-261-encounter-on-easte... Again, its Bruce Banner being forced into a situation he doesn't want to be in.

Right after that is a cerebral Midas-touch tale in the next issue. Synopsis here: http://www.hoodedutilitarian.com/2013/09/people-who-make-art-should... 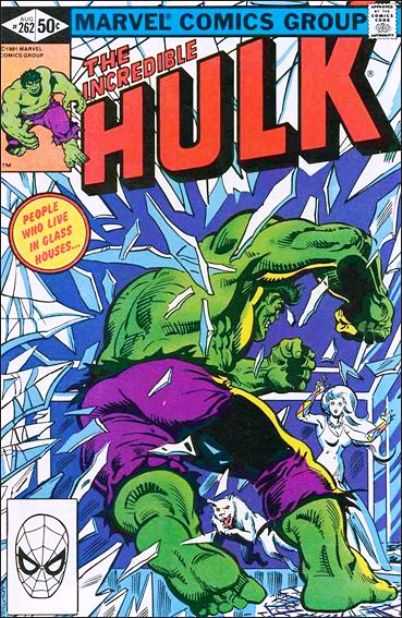 So, as you see from both of those stories, the Hulk basically falls into a situation and his presence brings it to a resolution.  That's my favorite sort of Hulk story, and at the same time it makes it difficult to make a Hulk movie around that -- his sudden appearance, transformation and destructive nature are what bring about the climax.

Hulk#1 and #2 (1962), the day is saved by Bruce Banner, with the Hulk pretty much unnecessary to the story. He's pretty much padding until #3.

Jeff of Earth-J replied to ClarkKent_DC's discussion The New Season (2022)
"It seems that three shows we watch are returning this coming Thursday: Young Sheldon (season…"
2 hours ago

Tracy of Moon-T replied to PowerBook Pete, the Mad Mod's discussion Anything, Everything, or Nothing At All
2 hours ago

Jeff of Earth-J replied to PowerBook Pete, the Mad Mod's discussion Anything, Everything, or Nothing At All
"Today is Tracy's birthday and she wanted to go antiquing (for the first time since pre-COVID…"
2 hours ago

Steve W replied to Steve W's discussion A Cover a Day
"These Kubert covers are really amazing. I always knew that…"
2 hours ago

Lee Houston, Junior replied to Steve W's discussion A Cover a Day
"Saw this comic advertised in a DC house ad back in one of my earliest comic book purchases. Found…"
4 hours ago

Philip Portelli replied to Steve W's discussion A Cover a Day
"I don't have this one but now I want it! Kubert's take on El Diablo!"
5 hours ago

The Baron replied to The Baron's discussion JUDGMENT DAY PASSES (SPOILERS!)
"I dunno.  Probably they got bored and decided to ome back and do it again."
7 hours ago

ClarkKent_DC replied to ClarkKent_DC's discussion The New Season (2022)
"Waiting for the return of Grey's Anatomy and The Flash, but those are due back later in…"
7 hours ago