SUPERMAN: SON OF KAL-EL #5: The comic that ruined my childhood. Just kidding! (Jeez, you're so serious lately.) Honestly, the kiss was pretty low key... could have been a handshake. Much ado about nothing.

LEGENDS OF THE DARK KNIGHT #7: After a good initial three-part story, I keep waiting for another one. They've all been "done-in-ones" by different creators since, which is how I justify continuing to buy this title. This one hearkens back to an era I'm not particularly nostalgic for, featuring Azrael and Ra's Al Ghul.

BLUE & GOLD #4: Booster and Beetle share their own versions of an untold tale from early in the history of their version of the Justice League on live TV. Finally, in a sequence illustrated by Kevin Maguire, Green Lantern (i.e., Guy Gardner) shows up to relate his version of events.

The Fantastic Four Anniversary Tribute  #1 : An interesting idea, but not that all-fired amazing in execution.  In the end, it's still the same two stories we've all read umpty-zillion times already.

Batman Secret Files: The Gardener #1 :A re-telling of Poison Ivy's story.  I found the preview of the new Batgirls book in the back more interesting.

Yeah, I flipped through that FF anniversary book yesterday and came to pretty much the same conclusion. I can see reading it once for the novelty of it, but I can't see ever reading it again in preference to the original.

I gave a pass to that Genis-Vell comic, too. I was thinking about filing it with some other more recent iterations of the the character just for the sake of convenience, but I couldn't see spending $8 for a reprint. (If you don't have those issues and have never read them, you might consider it, though.)

Currently re-reading Micronauts Special Edition. The five issue series reprints the first twelve issues of Micronauts by Bill Mantlo, Michael Golden and Joe Rubenstein that originally ran in the late Seventies. For me, the stories epitomize the Bronze Age of comics.

Gunslinger Spawn #1 - Its been about 30 years since I last read a Spawn comic, so I'm not quite up to date on whats going on with the character. This has the main story and then 3 back-up stories, which it made it a pretty decent value. The main story is of the "a stranger in a strange land" variety. Gunslinger is stuck in the modern age and wants to get back into the past.

This Spawn is considered one of the weaker versions, running around, but one of the back-ups explains why. Which what was nice.

This issue also provides a forward sale, instead of the asterisk telling us to look at and old issue of something, it says this will be explored in issue 3

I am currently going through the 1975 8 issue run of Curtis Comic's Doc Savage, written by Doug Moench and drawn by John Buscema.  It is a tie-in to the George Pal movie, but both the artwork and the storyline stick closely to the pulp novels.  Buscema's art is at its peak in my opinion, I daresay even better then his work on Tomb Of Dracula I dare say.

Permalink Reply by The Baron on Wednesday 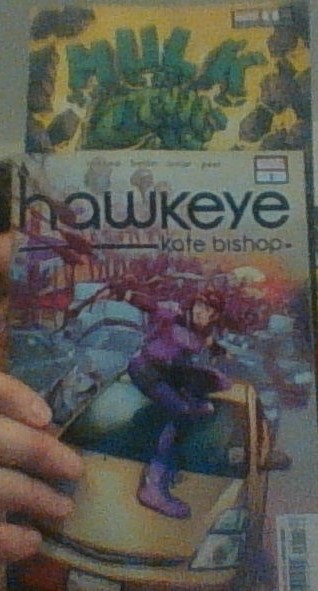 I liked the Hawkeye book, I could see following it. The Hulk book is OK, but it seems to be taking the character in a direction that I'm not wild about.

The other day I finished the Star Wars "War of the Bounty Hunters" story. After a couple of days to mull it over, I do think it was a good story. I still think it was too long, and some of the side stories didn't seem necessarily fit, but the idea behind it, Boba Fett's trials and tribulations to get a frozen Han Solo from Bespin to Tatooine was good.

Plus the end of both the last issue of Darth Vader and Bounty Hunters had an "oh sh--t!" moment.

Permalink Reply by Jeff of Earth-J on Thursday

I try not to buy what I do not read, but some series I buy on faith, which means, on the basis of a half dozen issues or so, I will continue to buy the rest of a series in hope of reading it someday in a "satisfying chunk." After I finished looking through my "Miscellaneous New Universes" box last week I've been  reading Gødland two or three issues at a time.

GØDLAND: I had been casting about for a comic book series to read that was Kirby-esque, yet not Kirby and settled on Gødland. This series is reminiscent of much of Kirby's later work (Silver Star and Captain Victory in particular) with visual motifs from his '70s work (at Marvel, specifically) and even FF (Lockjaw), but it is like none of them. Before he passed, fans-turned-pros used to show him their adaptations of his creations. Kirby was polite about it, but wasn't particularly thrilled that DC and Marvel were profiting of his creations while he was not. What he would have preferred, is if creators inspired by his work would create something new; that is the Kirby way. And that is what Gødland is.

I experienced good results reading this series I bought years ago on faith. I could likely keep this up for quite some time to come.