I always loved how the characters aged in this strip, it made them seem a bit more real.  I agree that the strip went off the rails a bit in the last few years. I know that Johnston had ealth and personal issues in the later years, I suspect that that affected the strip some.

I loved this strip for many years, and it was a fun bonus that they sent Michael to college... in my adopted home town, where I've lived now most of my life (the entire strip is set in Ontario, Canada, though often subtly so). But I really felt it lost a lot during its last decade. However, tastes vary.

I'm expecting mine in the mail on Monday or Tuesday. I previously bought all the TPB versions and am replacing them with these uniform HC editions. Truly love this strip.

In 2007, Lyn Johnston changed the format of the strip. She began inserting redrawn "continuity implants". The last new strip ran in 2008. In 2010 a heavily annotated "treasury edition" titled Something Old, Something New was released deatiling the changes she made and incorporating the "flashback" sequences with the originals to show how they fit. It was both informative and entertaining.

I get the idea of doing the "continuity implants," but the description of how it was done made it sound like as much if not more donkey work than drawing new stories.

She made so e story decisions in the last years of the strip that I disagreed with, and which I'll go into when I have more time.  Other people may well have been fine with them, of course,

As I recall, Lyn Johnston had severe arthritis, which is why she couldn't continue to draw the strip on a daily basis. Looking back, it's too bad she didn't collaborate with another artist who could draw in her style, as others have. Writing-wise, she had a lot of plans for future strips. 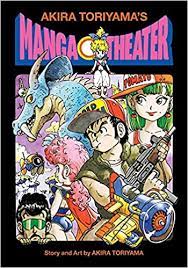 Short humor pieces from early in his career.  Probably of more interest to Toriyama fans to  those who are unfamiliar with his work.

Some artists start something and decide to end it when they have to for a legacy, like Charles Schulz did with Peanuts since he had it firmly stated in his will that no one could continue the strip, hence the books, comics and other media productions.

Others have allowed successors, but it's up to the individual reader to decide which is better on a title by title basis. 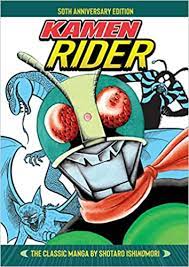 Read this today.  An interesting introduction to one of Japan's major super-hero franchises.  The first Kamen Rider TV series debuted in 1971, and, like Ultraman and the Super Sentai (a.k.a. "Power Rangers") series, it has spawned new shows almost every year since, down unto the present day.  The original Kamen (i.e., "Masked") Rider was a young fellow named Hongo Takeshi, who was captured by the evil organization Shocker, who transformed him into a cyborg.  He escaped them before they could brainwash him, and he became their nemesis.

There's a character in One-Punch Man, Mumen (i.e., "Unlicensed") Rider, who's name is a gag on "Kamen Rider", and who is a favorite of mine.

I scored this at my friendly neighborhood headquarters library's annual book sale this weekend: I've always heard of it, but never actually seen one. It's not in the greatest of shape (a small chunk of the cover flaked off when I took it out of the bag to read it), but it's mine!

FIRE POWER #30: As always, recommended. But, if you've not followed up on my recommendations for the past 2+ years, this is not the place to start.

ONE-STAR SQUADRON #6: The last issue of this mini-series. I am awaiting expectantly whatever Mark Russell chooses to do next.

BEN REILLY: SPIDER-MAN #4: I've been enjoying this series right along but, after having read J.R., Jr.'s new Amazing Spider-Man #1 last week, #4 comes as a bit of a disappointment. Oh, well... only one issue to go. And this has nothing to do with Ben Reilly, but what's up with "Spider-Gwen"? Is there anyone, at Marvel or in fandom, who thinks that's a good name? What if the original guy called himself "Spider-Peter"? What about "Peter-Pool"?

MAESTRO: WORLD WAR M #3: Surprisingly, my Pick of the Week. ("Surprising" because it was released the same week as a Mark Russell comic book. This one was very nostalgic for me because it features both the Sub-Mariner and the Abomination, both seminal Hulk characters for me.

DARK CRISIS SPECIAL EDITION: This is the the one I was most eager to get. I'm not even sure whether or not I'm going to be buying this series, the the Marvel and DC offerings are often the first to go (especially by the following Wednesday). Sometimes FCBD event lead-in offerings are just previews of actual first issue pages, but sometimes they are all new. If this one was all-new and I did decide to collect the series, I didn't want to miss out. The first story (10 pages) seems unique to the FCBD issue to me and provides a good example of how what I understand to be DC's new "everything's canon" approach to continuity might work. The next seven pages, specifically designated a "preview", appear to be excerpted from Dark Crisis #1. The final five-page sequence, I don't know, but it looks nice. The comic ends with a list of "DC Essential Graphic Novels" (mostly New 52 JLA), using some definition of the word "essential" with which I am unfamiliar). then there's a "Dark Crisis" checklist. Verdict: I will likely try the Dark Crisis series itself (and perhaps the Road to Dark Crisis lead-in), but none of the tie-in series.

JUDGEMENT DAY: This is Marvel's upcoming Avengers/X-Men/Eternals crossover. The first story simply looks unattractive, and it ascribes to an interpretation of the Marvel Universe I don't follow. The second story is about Blade's daughter. (Boring.) The third story adheres to current X-Men continuity and I had to force myself to read it. Verdict: No, no and no.

RED SONJA: Dynamite's offering is a reprint of Marvel Feature #4, the first Red Sonja solo feature. I have never been a fan of the "sword & sorcery" genre, but I bought the first four issues of this series in 1975 just because I was getting in on the beginning of a new series. Until today, I haven't read any of them since. I picked up this one simply because of the  art. I didn't know who Frank Thorne was in 1975, but I can appreciate it more today. I still feel pretty much the same about the story as I did when I was eleven years old. there is a second, wordless, new eight page story.

DOCTOR WHO: I picked this one up because it features the so-called "Fugitive Doctor", the most interesting new character to come out of Doctor Who since, oh... Jodie Whitaker's Doctor, I guess. I didn't really expect it to reveal anything not already shown on television, but it did in a way. It basically confirmed what has been hinted at: the the Fugitive Doctor immediately precedes the William Hartnell Doctor. It takes place on Earth in the year 1962, and yes, her TARDIS is already in the form of a police box. Granted the story probably takes place somewhere in England, but in a rural area where a police box would definitely be out of place if the TARDIS's chameleon circuit were functioning.

The story's last two pages take place one year later, and depicts the arrival of the Hartnell Doctor and Susan. I really hope that "one year later" is relative to Earth, because my impression has always been that the Hartnell Doctor grew old from childhood in that body. (Also, the "bigger on the inside" depiction of the children's clubhouse really bugs me. From the outside it's maybe 10 feet wide, yet inside there is a sectional sofa (and other furniture) with plenty of room to spare.

Bob, you picked up three of my four choices. I'm curious to read your impressions (and anyone else's, too, of course), especially of the Doctor Who one.

DARK CRISIS SPECIAL EDITION: Verdict: I will likely try the Dark Crisis series itself (and perhaps the Road to Dark Crisis lead-in), but none of the tie-in series.

I'm still up in the air about this.  I'm kinda burned out on these "crises".

I wasn't overwhelmed by this one, either. I'm not so up on Eternals continuity and characterization as you are, Jeff, but they seem out of character here to me.  Didn't they used to have a Deviant pal once upon a time - Karkas, I think his name was?  Now it seems like they have an almost Nazi-level need to eliminate genetic  deviants encoded in their very molecules? That don't sound right to me.

DOCTOR WHO: It basically confirmed what has been hinted at: the the Fugitive Doctor immediately precedes the William Hartnell Doctor. It takes place on Earth in the year 1962, and yes, her TARDIS is already in the form of a police box. Granted the story probably takes place somewhere in England, but in a rural area where a police box would definitely be out of place if the TARDIS's chameleon circuit were functioning.

I disagree with pretty much all of this.  To me, there's nothing in this that "confirms" that the Jo Martin Doctor "immediately" precedes the William Hartnell Doctor.  Given the amount of time traveling that the Doctor does, there could have been any amount of time (and any number of incarnations, for that matter) between the scene set in 1962 (which felt more American than British to me) and the scene one year later. In "The Timeless Children", the Whittaker Doctor tells the Dhawan Master that she remembers growing up on Gallifrey, and he says, in effect, "Yeah, all that happened, it's just that there was more before that that you don't remember", so I think that the idea that the Hartnell Doctor grew up on Gallifrey is part of continuity, at least what passes for "continuity" in Doctor Who.

Spider and His Amazing Friends - Simple stories for kids just learning to read. The sort of stuff that I probably would have loved when I was five.

Dave Palmer replied to Steve W's discussion A Cover a Day
"More Challengers.  This time versus Ultivac.  The original and the reprint"
1 minute ago

Jeff of Earth-J replied to Captain Comics's discussion Does anyone have James Bond DVDs or Blu-rays?
"Well, Cap, you've done it now... you've gone and gotten me interested in James Bond all…"
14 minutes ago

Luke Blanchard replied to Captain Comics's discussion Comics Guide: Nov. 28-Dec. 4, 2022
"Maybe it means "I will eat your heart" in Klingon."
4 hours ago

Richard Willis replied to Cavaliere (moderator emeritus)'s discussion What are you watching right now?
"Like driving on the left or the right*, I suspect these fairly modern creations were just locally…"
6 hours ago

Richard Willis replied to Steve W's discussion A Cover a Day
"I'm not challenging this post (really I'm not! Just a geek thing), but when this was…"
7 hours ago