What is the Legion of Super-Heroes, and why are so many people excited about its return?

DC Comics is reviving the Legion of Super-Heroes with some pretty big names. And, judging by the reaction on the Internet, it’s going to make a legion of readers pretty happy.

The Legion isn’t among DC’s best-known properties, and its existence is more a testament to fan enthusiasm than editorial planning. But that enthusiasm launched one of the earliest, pre-Internet fan organizations, and the LSH still smolders today.

The LSH first appeared in 1958,  with a throwaway story in Adventure Comics, then headlined by Superboy. “Throwaway story” isn’t as much of an insult as it sounds; in those days, DC didn’t pay much attention to its on-page history or characters’ backstories – what today is called “continuity” – and every story was seen as disposable.

This attitude was based on the common wisdom of the time, which assumed that readership was mostly pre-adolescent males, and would turn over every three years or so. DC characters never seemed to remember their own adventures, because it was assumed the readers wouldn’t  either.

So when Saturn Girl, Lightning Boy (later “Lad”) and Cosmic Boy – their names were actually on their shirts for easy reading -- showed up in late ‘50s Smallville and announced they were from a teenage superhero club 1,000 years in the future, it’s unlikely anyone at the DC offices expected newspaper columnists to be writing about them 61 years later. But its message of diversity and inclusion – even Superboy wants to fit in with his peers! – hit a nerve, and fan reaction ensured the Legion wasn’t a one-off.

“The Legion of Super-Heroes began as a gimmick and took years to acquire momentum,” wrote the late Les Daniels in “DC Comics: Sixty Years of the World’s Favorite Comic Book Heroes.” He went on to say: “Rarely a top seller but always a favorite of the most committed fans, the series became an experimental laboratory where a generation of comic book personnel got their training while they tried to stretch the boundaries of the form.” 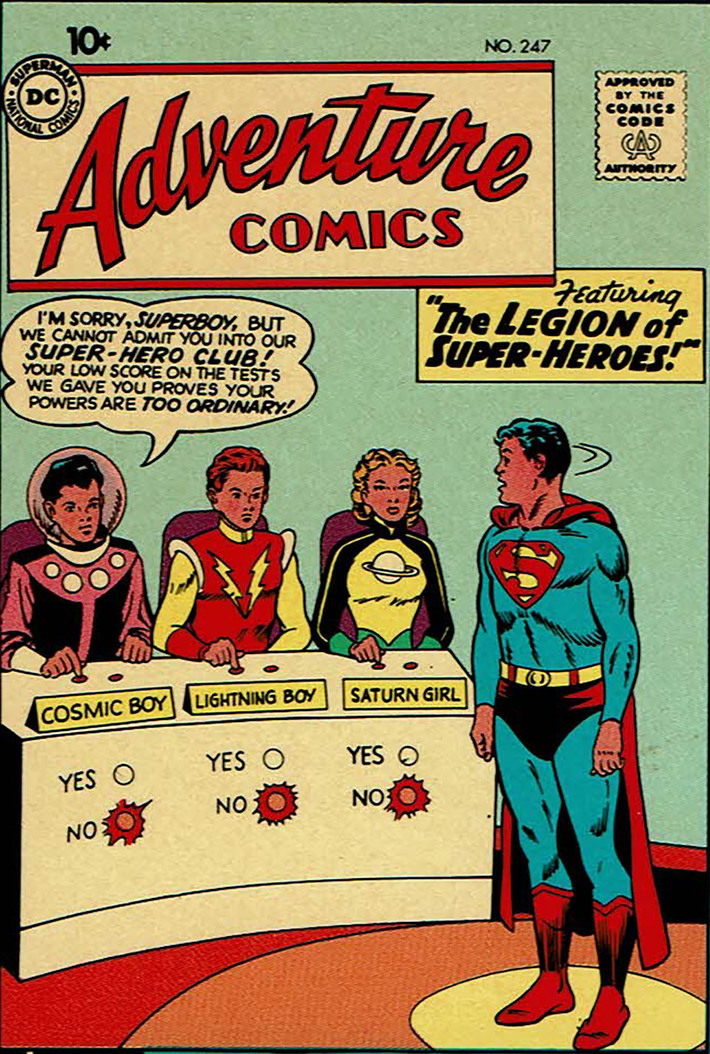 The Legion of Super-Heroes first appeared in Adventure Comics #247 in 1958, a story in which the time-traveling Superboy became a member.

The letters began pouring in after the first Legion appearance, and Super-titles editor Mort Weisinger ordered up more Legion stories. With each installment, the cast expanded and the 30th century milieu was further fleshed out. Anticipating Star Trek, which arrived in 1966, the Legion strip showed a happy, high-tech future. That there was a future at all was a pretty reassuring thought during the Cold War, much less one where we all lived in peace. And while the early Legion writers’ idea of aliens was “people who look like us, only maybe with antennae or something,” there was a wide variety of skin color – including orange, blue and green.

“[Legion] was one of the only ongoing science fiction series [at the time] that put forward a positive future,” said famed Legion artist/writer Keith Giffen to Newsarama.com. “That made it stand out … There were threats and all that came roaring in, but for the most part, it was flight rings and snazzy headquarters and a fun future.”

The Legion, at its height, had more than 40 recurring cast members. It was, former Legion writer and DC editor-in-chief Paul Levitz told Daniels, “a book you needed a scorecard to read, much less to write.” But in the hands of Levitz, Giffen and others, it grew into a sophisticated sci-fi strip that was almost self-contained. The strip interacted with other DC titles to some degree – Superboy and Supergirl were both members – but the 1,000-year gap prevented much crossover.

This aspect only added to the Legion’s appeal for its brainy but often solitary readership. The strip’s letters page, the “Legion Outpost,” reflected readers who felt they had a strip, a team, a title – nay, a century – to call their own.

But DC has never missed an opportunity to shoot itself in the foot, and did so with the Legion in the mid-‘80s.  The Legion’s stated raison d’etre – established in its first story, and repeated in lots of them afterward – was that the super-powered teens of the future were inspired by the legendary Superboy to come together and do good. But in Crisis on Infinite Earths (1986-87), the publisher rebooted Superman, removing Superboy from the character’s backstory altogether. In the new, “post-Crisis” history, Superman didn’t develop his powers, uniform and mission until adulthood.

Without Superboy, the Legion lost its reason to exist and its biggest star with one swing of the axe. Worse, Superboy had been prominently featured in most Legion adventures, so with the Teen of Steel erased from history, who won all those battles with Mordru, the Fatal Five and the Time Trapper? Bouncing Boy?

(Yes, there is a Bouncing Boy. Stop laughing.) 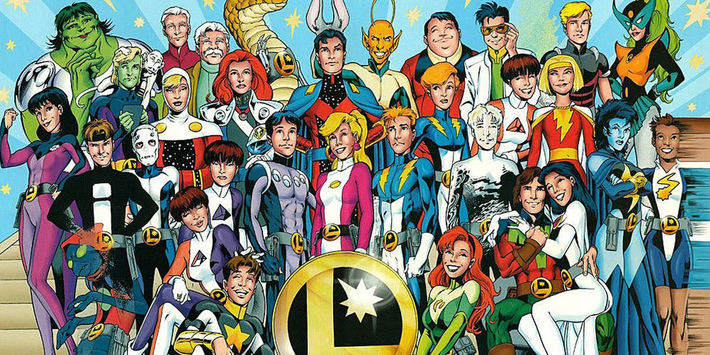 In all its incarnations, such as this one from the 1990s, the Legion of Super-Heroes has always had a huge cast.

What followed was a sad spectacle, as DC revamped the Legion again and again, trying to find a plug for the Superboy-shaped hole in Legion history. All that looking backward kept the series from moving forward, and it has never recovered. When DC rebooted its entire superhero universe (again) in 2011, the publisher made a tepid gesture toward the Legion, but allowed the series to die on the vine in 2013.

Fortunately, the Legion has fans in high places. Geoff Johns, DC’s chief creative officer, has been inserting Legion iconography and Saturn Girl in his Watchmen sequel, “Doomsday Clock.” And writing superstar Brian Michael Bendis, who moved to DC in 2017, told Newsarama that he’s been planning to bring the team back since he arrived at DC.

But before the Legion could return, Bendis (and Johns) had to prepare the ground. There’s no better place to do that than in the Superman titles, given the importance of the Super-family in Legion history. And surprise, surprise: Bendis has been writing Superman and Action Comics for two years.

And now he’s ready. DC has announced that the Legion will return in Superman (fifth series) #14 next month.

However, the new Legion of Super-Heroes title won’t arrive until November. Bendis will do a little more throat-clearing with a two-issue miniseries titled Legion of Super-Heroes: Millennium in September and October. That series will take an established DC character and abruptly grant her immortality. She – and gender is all DC has revealed of her identity – will then live through 1,100 years to the 32nd century, where the new Legion will be set.

Along the way she will visit various other future settings established in various DC series, and we will see how they all fit together. The first issue will feature Batman Beyond, Kamandi and Tommy Tomorrow. The second will involve Booster Gold and OMAC. (There’s no sign of Atomic Knights or Space Ranger, but we can always hope.) Thrillingly, the cover of Millennium #2 depicts Superman’s son, Jonathan “Superboy” Kent, accepting a Legion flight ring.

So this Legion will feature a Superboy, but not the original. The future won’t be the same either.

“I know that sometimes in the past, the Legion have gotten together because things are so peaceful, they can't stand it,” Bendis told Comicbook.com. “Our Legion is coming together out of what they think is dire necessity. Things are starting to crumble, and they're crumbling fast, and it really feels like it's time for a new Age of Heroes for the first time in a millennium.” 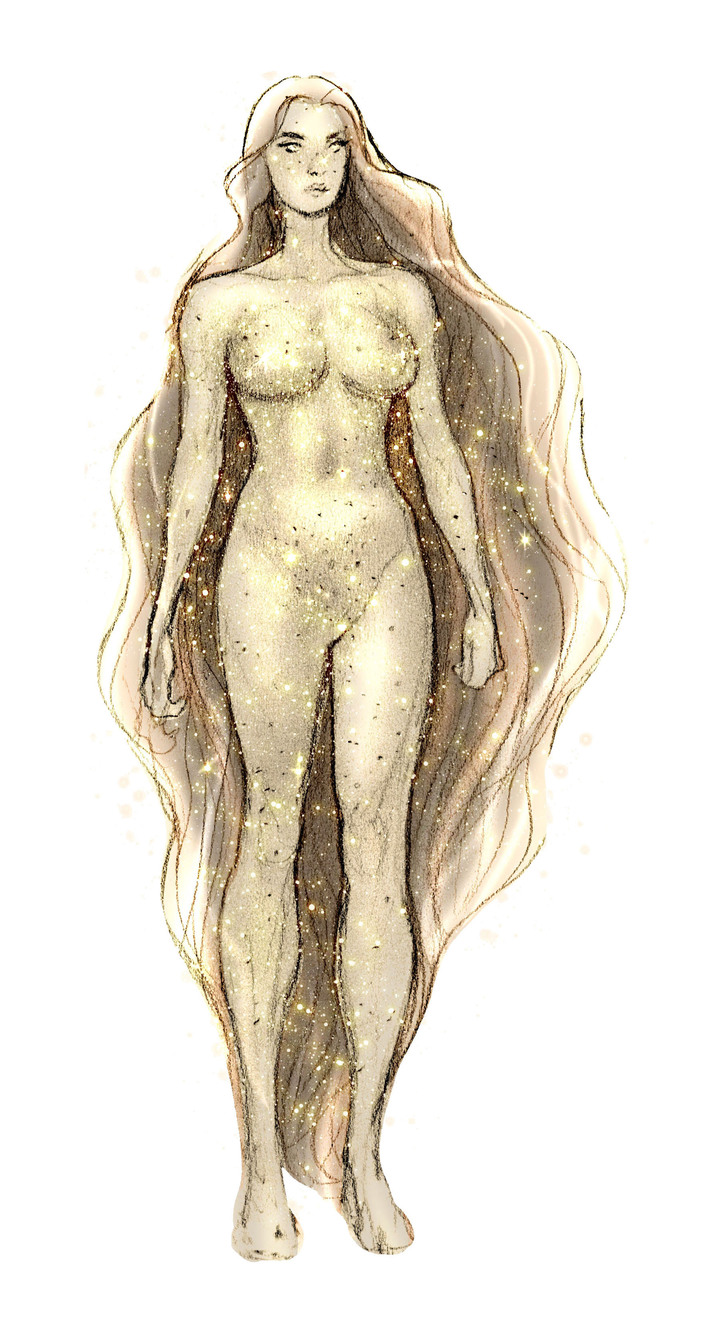 The new Legion’s Dream Girl won’t much resemble the version seen on The CW’s Supergirl. Art by Ryan Sook.

(Yes, there is a Matter-Eater Lad, and stop laughing. His power is the ability to eat anything, and he’s from the planet Bismoll. I mean it, stop laughing.)

So if you’ve never read Legion of Super-Heroes, be prepared to meet 30 or 40 new best friends in the coming months. And if you have, trust that Bendis is taking your old friends seriously,

“The Legion of Super-Heroes is the biggest project I’ve ever done in my life,” he told Newsarama.

That’s from the guy who re-built the Avengers, created the Ultimate Universe and gave us the Miles Morales Spider-Man. I think we’re in for a treat.

“The Legion of Super-Heroes is the biggest project I’ve ever done in my life,” he told Newsarama.

That’s from the guy who re-built the Avengers, created the Ultimate Universe and gave us the Miles Morales Spider-Man.

I'm going to be open-minded about this as these are new versions of the classic Legionnaires as this would be, say, Saturn Girl IV, I think.

I hope this Legion is good but my Legion is safe in my Archives and such!