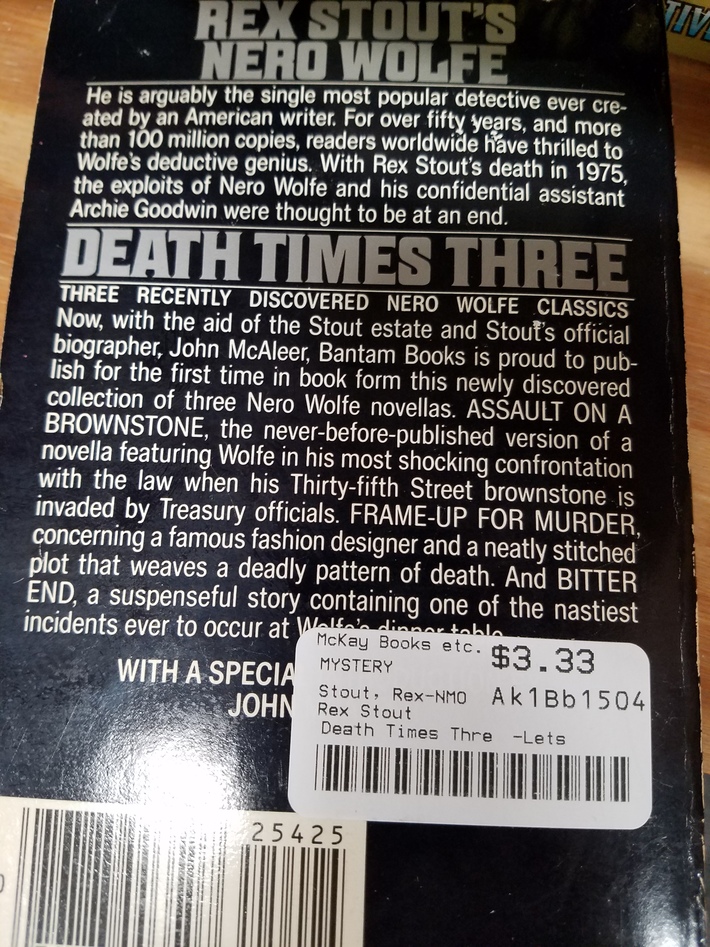 We had a virtual volunteer opportunity at work, and it was sending a Valentine's Day card to a child at St. Jude's. I leapt at the chance, and it really gave me the nice, warm feelings inside.

That's awesome.  The Lad made a batch of handmade Valentine's Day cards, and he and The Lovely and Talented delivered them to a seniors' residence facility yesterday as a Young Men's Service League project.

That's great! I love hearing that.

That's awesome.  The Lad made a batch of handmade Valentine's Day cards, and he and The Lovely and Talented delivered them to a seniors' residence facility yesterday as a Young Men's Service League project.

It was actually, yesterday, so yesterday I was so happy to celebrate my dad's 80th birthday.

Now that we're all fully-vaccinated, The Lovely, The Lad and I had brunch with her parents and some family friends that we hadn't seen since The Before Times, at a little family restaurant in Vienna, VA that has been one of our "go to" casual places for years.  The kind of place where they know you by sight and barely have to bother taking your order because they know what you like. But also the kind of place that was seriously imperiled by the pandemic. The Lovely has been ordering carry-out for her parents, so we knew it hadn't closed, but I don't think any of us had actually been in there for well over a year.

They were doing land office business. That made me smile.

While I was listening the radio this morning, one of the host was complaining about how long documentaries have become. Like if there is a 4 part series he thinks it could have easily been done in 2 parts. He thinks the documentarians are padding their series because the streaming platforms need content. What made me smile was thinking, "Yeah that is basically been saying that about comic books for years."

So there's this particular movie I would like to own on DVD. (I have it on VHS recorded off TV, but I would like a cleaner copy.) It is available, but it's "priced for the rental market" as they say (or do they still say that?)... as they used to say. Anyway, every couple of years I check to see if the price has come down. It has not. It sells on Amazon for 70 bucks. Then Tracy finds a website selling it for $13, marked down from $19. Score! Before ordering, though, she read through the seller's "comments" section. It got one star only because it's not possible to rate it any lower. There were 23 comments, all of them negative. The movies are recorded on unlabeled discs and come in unlabeled cases. The recording quality is terrible and one buyer remarked that the heads of the actors were even cut off on the movie he bought (not sure how they accomplished that, unless they filmed it off TV with a video camera). One customer complained that his movie had commercials.

But the absolute funniest comment was from a woman who had ordered a copy of the classic film Mr. Belvedere Goes to College and received a disc with two movies on it: Mr. Boogedy and Bride of Boogedy. If we had any way to contact her we would buy it from her at the price she paid. It reminds me of the time Tracy and I tried to rent The Man Who Knew Too Much and the "helpful" video store clerk suggested, "We have The Man Who Knew Too Little." That has been a catch-phrase of ours ever since, but the lady who bought the Mr. Boogety disc has us beat.

For Father's Day, The Lad and The Lovely gave me A Critical History and Filmography of Toho's Godzilla Series (2nd ed) by David Kalat.

I've never heard of this book, but it definitely makes me smile to know that the two of them -- one of whom, the one who first saw it, doesn't give a rat's patootie about The Big G -- looked at this and thought, "Yep, perfect gift"

For Father's Day, the young man who made it possible for me to even celebrate Father's Day added to my personal library with two tomes:

a copy of The Encyclopedia of Comic Book Heroes, Volume 1: Batman, to replace the one I keep mentioning (like here, and here and here, just to spot a few) that I've read so often, it's falling apart.

The Boys from Grover Avenue: Ed Mcbain's 87th Precinct Novels, a scholarly examination of the 87th Precinct series. Being a longtime aficionado of the series, I'm glad to finally get my hands on it.

Ah, how things have changed ...

I'm watching this year's Olympics, and it wasn't much fun during the first week. It's a year late because, y'know, COVID, but they're still calling it "Tokyo 2020." My son isn't that excited about it because it's pretty light on stars. Michael Phelps isn't in it. Usain Bolt isn't in it. Neither Serena Williams nor Venus Williams are in it, nor Naomi Osaka. There's no Dream Team in men's basketball, no Lebron James or Steph Curry. Kerry Walsh-Jennings didn't make the cut for women's beach volleyball. For women's gymnastics, McKayla Mulroney, Laurie Hernandez and Gabrielle Douglas are out of it. In fact, I've seen most of these people in TV commercials during the games and not in actual Olympics events.

We do have Simone Biles back, but she very famously withdrew from several events because of MASSIVE pressure to perform, and I blame a large part of it on NBC, which oversold this year's events as "The Simone Biles Show - and maybe some other people, too."

Which brings us to why Simone Biles withdrew from some of the events: The pressure to perform -- and again, this Olympics is a year late, so that's a year of added pressure -- weighed on her to the point where she lost that confidence in the mind-body connection that allows your mind to think about what you want to do, and your body to do it without thinking.

And I fully support Simone Biles' decision to step back, because one other thing I have learned, and now fully understand in a way I did not before, is that while what these girls are doing looks pretty and dainty and delicate, that $#!+ is DANGEROUS. There's a Facebook post that reminds us of Elena Mukhina, the 1978 women's gymnastics World Champion. She broke her leg the next year, but her coaches pushed her to train for the 1980 Olympics, even though she wasn't fully healed. In training, two weeks before the games, the not-properly-healed leg didn't allow her to execute a particularly difficult move (that since has been banned), and she landed on her chin and broke her neck.

Does anybody want THAT to be the story of Simone Biles in THIS Olympics?

I don't. Anybody yammering that Simone Biles is a quitter can go piss up a rope.

Ah, how things have changed ...

I'm watching this year's Olympics, and Gabrielle Douglas is no longer the queen. In Rio, it's all about Simone Biles, who is, in a word, phenomenal.

Where Gabrielle Douglas made it by hard work, Simone Biles works hard too, but has more natural talent. She blew away the field with moves I've never seen anybody do before, moves that are uniquely her own. And she's so talented, she makes it look easy. Simone Biles makes it look so easy that when she stumbles -- like she did on the balance beam where she got bronze -- the stumble reminds you "This gymnastics stuff is hard!"

And Gabrielle Douglas is taking a lot of ridiculous flak, about her hair, about her attitude, about her patriotism, about the level of her support for her teammates, all of which is stuff and nonsense. It must be hard -- she's almost the elder statesman of this group, at 20, and three of them are so young and eager -- and she didn't make the cut for some of the events she was going for. And the Twitterverse is mercilessly mocking her.

But we love her. You go, girl!

Then Gabrielle Douglas went up, as confident as anything, and she stood straight and tall -- well, as tall as you can when you're 4 foot 11 -- and did her routine, all jumps and leaps and turns and somersaults and what not, and then she landed, and let out this smile that would melt a glacier, like "WHOA! I got this!"

So my joy in this moment is not only in the triumph of an American, in the success of the first Black woman to win the individual all-around competition and the first Black woman to win the individual and the team all-around in the same Olympics, and in the knowledge that, going into this Olympics, nobody thought much of her -- oh, they thought she was good, but not that good, certainly not great. There was another girl on the American team who was anointed, who everybody thought was going to win it all, who was going to come home with her neck straining from the weight of all the gold medals she was going to win .., except for the inconvenient fact that she didn't even qualify!

So, I'm happy for Gabrielle Douglas for rising to the occasion, and for having that confidence and that poise and that talent and that skill and that pluck and for really really believing in herself when not everyone around her did. You go, girl!

Jeff of Earth-J replied to Jeff of Earth-J's discussion Swamp Thing
"ISSUE #70: Although Constantine now has his own solo series, his presence is still very much felt…"
9 minutes ago

Peter Wrexham replied to Steve W's discussion A Cover a Day
"I posted a Star Trek cover by George Perez a few days ago.  Here's his version of…"
24 minutes ago

Jeff of Earth-J replied to Randy Jackson's discussion Ketchup/Catsup - Refrigerated or not
"If I use a tomato-based condiment at all, I use steak sauce. It tastes better on hamburgers, on…"
38 minutes ago

Jeff of Earth-J replied to Jeff of Earth-J's discussion Seduction of the Innocent
""Somehow, I wonder what would happen if Frederic Wertham met Peggy Charen, of Action for…"
51 minutes ago

Richard Willis replied to Randy Jackson's discussion Ketchup/Catsup - Refrigerated or not
"Me too."
9 hours ago