When did your Silver Age begin?

Discussion on another thread that mentioned Mike's Amazing World of Comics prompted me to take a look to see if I could pinpoint exactly when my comic book addiction began in the 1960s. Sure enough, I was able to narrow it down to May and June of 1963. The first three comics I remember buying were Action Comics # 303, Detective Comics #317 and Superman #163. I had seen some comics in the children's ward when I was hospitalized in second grade and began looking to buy my own when I got out. I remember staying exclusively with Superman and Batman titles, which came to include Justice League of America. From there I sampled some of the individual titles of the JLA membership, but none of them clicked with me for more than a few issues. I did like the Brave and the Bold team-ups and Metamorpho was a favorite, but the Schwartz titles seemed too "mature" for my young tastes. 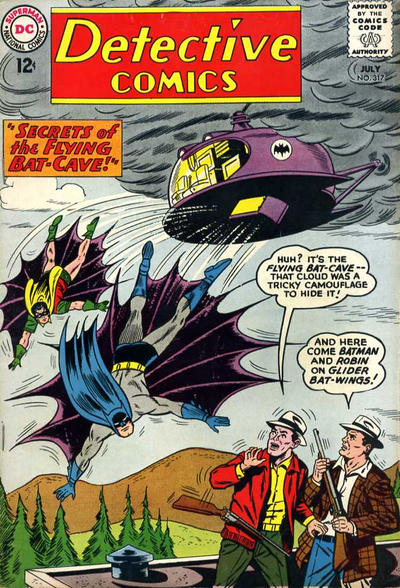 A couple of years later, when I was home sick with chickenpox, my wonderful mother brought me a stack of used comics she had found at a second-hand store. They were all Marvel comics. I didn't know the characters and wasn't much interested, but, having nothing else to do, I read them. I became a Marvel fan and abandoned DC until sometime in the 1970s. 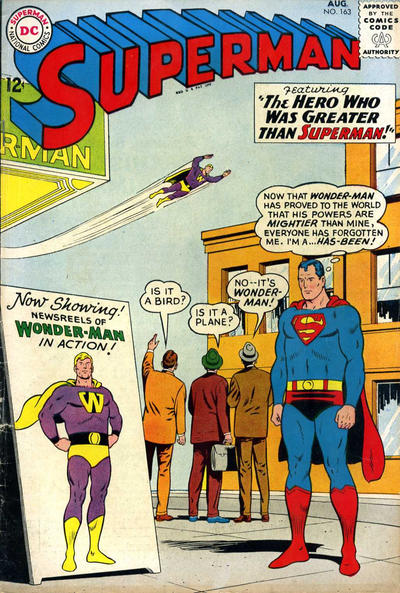 Fortunately, I've been able to catch up with a lot of what I missed with the DC Showcase Presents reprints. I also was fortunate to discover the Ask Mr. Silver Age column in CBG that helped me "interpret" those stories in an entertaining manner. I still miss that monthly dose of mirth.

I got into comics a bit later than you guys and only very rarely picked up anything from DC. My earliest comics were Fantastic Four, including the reprints from Marvel Collectors Item Classics.

I've heard that story from a number of people. Those coming in during the 1970s had many more chances to run across a Marvel comic on the stands, and many of those reprint comics, especially with early FF, seem to have been a gateway drug.

I remember having a couple of 1960s DCs, one an LoSH story featuring the Tornado Twins (which a google search came up with info that they made their debut in 1968, when I was 6 years old and living on a Navy base in Japan) and a giant-size issue reprinting Flash, Hawkman, Green Lantern and BatMan stories -- all ok, but the characters mostly seemed rather dull.  The story that really stuck out in my memory from that era,  was a Tales of Suspense Iron Man story by Lee & Colan featuring the coming of Whiplash.  I'm pretty sure I read that in a barbershop in 1968 so I didn't even own it (until I got the reprint in Origins of Marvel Comics for Christmas many years later), but the art & writing really built up the growing tension, beginning with Jasper Sitwell trying to help Iron Man, who is lying on the ground, apparently nearly dead and is later kidnapped by Tony Stark's nasty cousin who delivers him to the Maggia.  Shellhead recovers but is then trapped in a room with a new villain with a whip powerful enough to shred his armor ... to be continued!  Somehow that story just really clicked with my imagination.  This story introduced me to a lot of intriguing concepts and characters and I really wanted to know more about this strange world.  The Legion of Superheroes and the other DC stories just didn't do that for me.  Oh, I was mildly intrigued, but the stories seemed somewhat dopey to me even when I hadn't yet reached double-digits in years. Yeah, Marvels could be more frustrating with those continued stories and never knowing if I'd even actually obtain that longed-for next issue, but I was more willing to put up with that than with stories that bored me.  Even when a Marvel story came to a conclusion, most mags had those subplots that also left me wanting to know what would happen next with that.  I also recall reading the FF story with them trapped in Latveria and Spider-Man facing off against Quicksilver.  Can't remember many more 1960s Silver Age comics that I actually read when they were brand new on the racks, but those few Marvel Comics I had read circa '67 - '69 definitely made an impression on me and made me want more.

It sounds like Marvel didn't really get going until the Silver Age was just about over, when they were finally able to have as many comics as they printed distributed. Until then people got into Marvel by getting into DC first.

Marvel definitely started out as the underdog to DC in the early '60s but where every other comics company that tried to compete with DC in the superheroes field in the 1960s ultimately gave up, Marvel survived and eventually surpassed DC, and at the time DC seemed hopelessly stodgy while Marvel was more innovative and exciting, but eventually DC came around, taking more chances and much improving its products and so the game continues decades later.

Charlton seemed to just not care. Many of their covers were stapled onto the comics crooked, lots of double covers, multiple printing errors, covers depicting scenes from a story in the previous or next issue.

Stan Lee mentioned in his Soapbox that Marvel finally pulled ahead in sales in 1972, which would have been when DC was printing all of those 48 page comics.

I bought a Charlton one time that had a cover for a different title on it. Their poor printing worked against them, even though many of their books were pretty good.

I think the problem DC had with larger 25 cent books was that initially (I believe) they contained too many reprints. Marvel, when they tried it, had the same problem. It was enough of a shock to the readers to almost double their prices without expecting them to buy older stories. I have yet to be impressed by the Golden Age reprints they often used, which suffered mightily from poor art and/or heavy inking.

Most reprints of Golden Age stories that I've read have left me wondering "what was 'golden' about that? this is terrible!"  I know not everything from the "golden age" was shoddily written and poorly drawn but it appears the bulk of it was. EC comics of the early '50s seemed to have the most consistently well-written and well-drawn stories of any publisher prior to the 1960s, but there were always gems within the mountains of garbage, to use Starlin's imagery from a classic Warlock story.

Part of that was the best artists got drafted in WWII. The late 40s has some pretty bad artwork. Flash looks weird, the JSA looked like a comedy series, and Namor's head literally swelled until he needed super strength to hold it up. By the time you get to the 50s you have to really dig for the gems.

A modern day equivalent to putting the wrong cover on a comic would be my ordering volume 1 of the Marvel Masterworks Tales of Suspense last year. I got the cover but the book inside was volume 1 of Iron Man. Be careful when buying from Amazon.

I hope you got a refund. Anything you buy on Amazon is backed by their replacement or refund policy, whether it is their sale or one of their partners.

I've never explored EC's output in depth, but I do agree. There were stray features and stories elsewhere with terrific art, like the Enrico Bagnoli instalments of "Futura" from Planet Comics. But only EC published story after story with knockout art. There are two points to note, though. First, EC's line was only ever small. Second, its heyday was after the heyday of superheroes, and a lot of the art of the 1950s was better than the art of ten years earlier.

DC's output of the 1950s was probably very consistent. The catch is it wasn't adult, so it's not very exciting. The good thing about early Golden Age comics is they're less constrained. The stories were wilder, and there were more and more unusual features because more titles were mixed-genre anthologies and there were so many back-page slots. In Golden Age comics one also finds lovely drawing combined with poor storytelling or wasted on poor stories. DC's superhero stories of the 1950s are solidly put-together but tend to follow grooves.

And clearly, looking back from an adult perspective, most comics produced from the 1930s through the early '70s were aimed at young children, maybe no older than 15, but mostly from ages 4 to 11, I'd expect, and most kids were expected to give them up after maybe 3 or 4 years, so writers recycled a lot of stories, maybe on average every 3 years.  There were also comics that were aimed at a slightly older audience, maybe at guys in the military looking for something quick & easy to read while off duty and not carousing out on the town.  EC's seem clearly aimed at the older range of fans and was the last hurrah of the wild Golden Age era before the CCA clamped down on everyone.  Fans like Roy Thomas who kept reading comics well into adulthood and into college were probably relatively rare, at least until Marvel Comics started getting a lot of attention for breaking most of the standard comics conventions, albeit still within the limits imposed by the CCA, unlike the underground comics that were largely inspired by EC.

It was probably the formulaic aspect of most DC's in the '60s that turned me off of them.  Marvels could be formulaic also, but usually with enough clever twists that I didn't mind them as much.

Oh, and I'm sure having a relatively small output helped EC put out better quality comics.  For me, Marvel really began to suck when they went crazy with expanding in the mid-80s.  I lost interest in trying to keep up with everything and didn't bother trying to track down everything tied in with the big company crossovers.  They were fun over two or three titles but when it got to 10 or 15 or more?  Uh, uh.
Luke Blanchard said:

DC's output of the 1950s was probably very consistent. The catch is it wasn't adult, so it's not very exciting. The good thing about early Golden Age comics is they're less constrained. The stories were wilder, and there were more and more unusual features because more titles were mixed-genre anthologies and there were so many back-page slots. In Golden Age comics one also finds lovely drawing combined with poor storytelling or wasted on poor stories. DC's superhero stories of the 1950s are solidly put-together but tend to follow grooves.