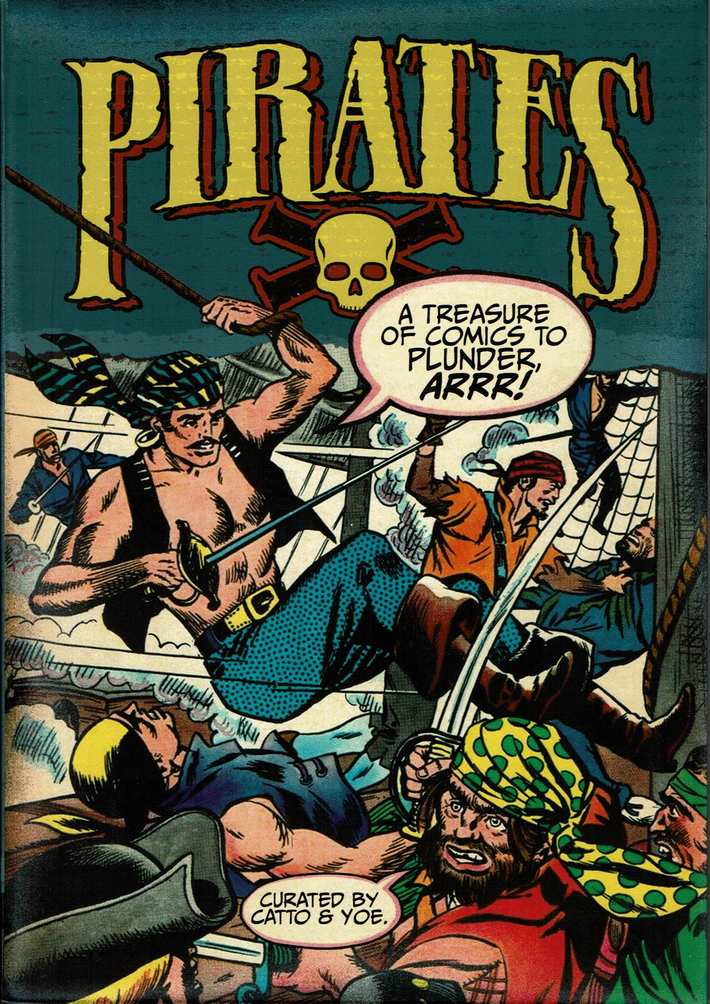 March 12, 2020 — Avast, me hearties! Pull up a barrel and I’ll spin ye a tale of freebooters, sea-soaked adventure and more blarney than ye can swing a sabre at! Aye, I be talking pirate comics, ye scurvy sea dogs!

There are many, no doubt, who will be surprised to find out that there ever were pirate comics. But Treasure Island, the novel that is credited with creating the popular notion of the buccaneer, came out in the late1880s. That was close enough to the arrival of new, 20th century mass media like movies and comic books for the popularity of the pirate to carry over.

In fact, the same year Errol Flynn swashed buckles in Captain Blood (1935), DC Comics was serializing “Dewey and the Pirates” in New Fun Comics. Dewey was joined the next year by reprints of the popular comic strip “Terry and the Pirates” in Dell’s aptly-named “Popular Comics,” and from then on hardly a year went by without the odd privateer rearing his scurvy head somewhere in comics.

Pirates have never been as popular as other genres, of course. Jungle comics, teen humor, romance — almost  every genre has more to brag about than pirates.

But you did see some serious efforts now and then, like EC’s gorgeously rendered Piracy title (1954-55). The entire series was inspired by Howard Pyle’s famous pirate paintings — as are virtually all pirate projects — especially the cover of the second issue, which was a Reed Crandall homage to Pyle’s famous painting, “Who Shall Be Captain?” But more on that later.

Meanwhile, here’s an interesting buccaneer bit: In Alan Moore’s legendary Watchmen, the author reasoned that superheroes wouldn’t be the dominant concept in comic books in his world, since the genre was no longer fantasy (there were real-life people dressing up and fighting crime). The genre that replaced superheroes in Watchmen? That’s right: pirates. Arrr, matey, ‘tis a fact!

So you have to give the venerable pirate genre its due, for longevity if nothing else. And that brings me to Pirates, a new collection of comics assembled by comics archaeologist Craig Yoe (Ho Ho) and Ed Catto. As the cover announces, it’s “a treasure of comics to plunder, arrr!”

This book is a gem, all right. “’Tis on the morrow their trial’ll be held aboard th’ brig ship,” says Captain Hawk on the first page, from a story originally in 1947 Jumbo Comics. “’Twill be my pleasure to testify ag’in th’ barnacles!”

I have no idea what that means! Except that, of course, I have no option but to read the story. And all the rest of these rum-besotted tales, too, by some of the most famous artists to work in comics. 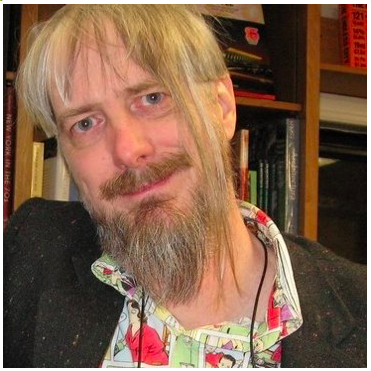 Cursed with curiosity, I had no recourse but to par-lay — uhh, I mean, talk to Yoe and Catto about their book. And the first  question I had was the obvious one: Why pirates?

“I’ve always loved pirates stories,” said Catto, “in prose, movies and especially comics. But it really clicked for me when I moderated the Pirates Panel at San Diego Comic-Con last summer. I was, quite frankly, astounded at how large (and boisterous) the crowd was. There was an intense interest in real pirates as well as fictional pirates!”

Yoe chimed in as well: “Pirates are discriminated against just because they are all about  pillaging and plundering 24/7,” he said. “Sure, superheroes stand for truth and justice, and those aren’t bad things, but we wanted to give the bad boy pirates of comics their due, too. Besides, pirates have cooler costumes than the wear-your-underpants-outside-your-tights ‘super’ crowd!”

That was so hard to argue with, I didn’t try. Instead, I asked what the pair’s criteria was for the stories they selected.

“We tried to provide a broad sampling of pirate stories, and to be sure to showcase our favorite artists,” Catto said. “So many top artists have dabbled in the genre, including Frank Frazetta, Will Eisner, Wally Wood,  Reed Crandall, Graham Ingels, Carl Burgos — who you can thrill to in the book. The list goes on and on."

Yoe’s turn: “It’s little known, but my middle name is ‘Entertainment,’ so I am constantly reminded every time I fill out a form to make our book collections of vintage comics as fun and engaging as possible. Pirate comics are so inherently entertaining that this was easier than walking a plank!”

Yoe wasn’t just whistling “Yo Ho Ho and a Bottle of Rum” about his vintage-comics collections. Yoe, both solo and with collaborators, has through his “Yoe Books” resurrected hundreds of old comics stories, focusing mostly on early 1950s horror comics and “weird” romance stories. (And believe me, he finds some dandies.)

The pirate genre is a new booty for the old campaigner. And it led me to wonder if pirate comics were a thing of the past, or if, hopefully, they were just moribund, ready to rise from Davy Jones’ locker and strike without warning on the stands.

“There was always a truism amongst comic publishers ‘that pirate comics don’t sell’,” Catto said. “But then you see this interest bubbling up. Shanghai Red was a great pirate comic last year by Christopher Sebela and Joshua Hixson, and Stephanie Phillips just announced a new pirate comic, with a female pirate as the protagonist, called A Man Among Ye. And since we’ve announced this book, I’ve had several folks tell me about their pirate comics in the works!”

Obviously, it’s in my best interest to mention that Pirates ($12.99, Clover Press) arrives March 18 in comic shops, and on March 25 in bookstores. And if you need more information, here’s a link to the video trailer on YouTube. The variant cover to Clover Press' Pirates displays Howard Pyle's "Who Shall Be Captain?" in the trade dress of EC Comics' Piracy series. The irony is that the cover of Piracy #2 displayed an homage by Reed Crandall of the famous Pyle painting. (Cover art by Howard Pyle, courtesy Clover Press)

And I promised a little more on cover homage that was the cover to EC’s Piracy #2, so here it is: In an inspired act of artistic jiujitsu, Pirates will offer a variant cover, one with the EC Comics trade dress, but the original Pyle painting in place of the Crandall homage.

That should be booty enough for anyone. Savvy?

I have never been disappointed witha Craig Yoe collection. I pre-ordered this one. It was solicited to ship last week but it didn't, so maybe we'll see it on Wednesday.

It always amuses me that everyone thinks all pirates go around saying "ARRR." This comes from the popularity of the 1950 movie Treasure Island and the utterances of Robert Newton as Long John Silver. Many of us saw it on TV for the first time.

Richard, everything we think we know about pirates was a media creation, not just "ARRR."

Most of what we think we know about pirates was created by Robert Louis Stevenson in Treasure Island, and I mean "created" because it had no basis in reality. And Howard Pyle created the look we associate with pirates, which he basically made up. Then movies like Captain Blood and Sea Hawk put all that together, and cemented it in the public mind.

Like the cowboys who had gunfights at high noon in the Wild West, the pirates of the bounding main were pretty much entirely fictitious. And the time period in which these genres were supposed to take place were pretty short, but have become HUGE in popular fiction. Neither lasted for more than a decade or so.

As I understand it, Many pirates were agents of royal rulers attacking rival countries' ships. The rest were into rape, murder and pillage. I always think it's questionable for kittke kids to dress up like pirates.

As for "cowboys," why do people call westerns "cowboy movies?" most of the characters don't come near a cow. As for shootouts in the streets, the favored way of getting rid of somebody was to shoot them in the back.

But piracy has existed throughout the history and the world. Jorge Luis Borges's A Universal History of Infamy includes a fictionalised account of the career of the Chinese pirate queen Ching Shih, of the early 19th century, which I mention because it's where I heard about her and she's worth hearing about.

Important early sources on the Golden Age of Caribbean piracy include De Americaensche Zee-Roovers by Alexandre Exquemelin (1678), known in English as The Buccaneers of America, and A General History of the Pyrates (1724; subsequently expanded) by "Captain Charles Johnson", who some hold was really Defoe, but others have questioned this. The latter mostly describes recent pirates.