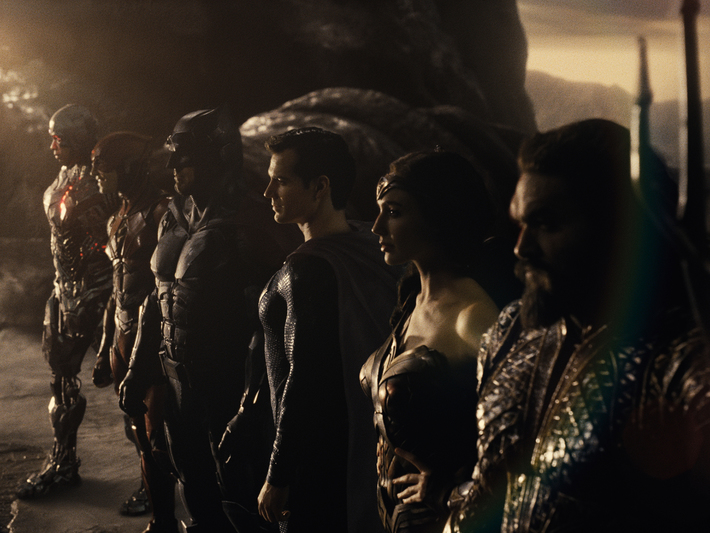 March 25, 2021 — I managed to make it through the entirety of Zack Snyder’s Justice League. Here’s what I learned:

And by that, I don’t mean the movie, which clocks in at 4 hours, 2 minutes. Although sometimes it did feel like it would never end. (My partner went to bed halfway through.) The epilogue alone was almost 20 minutes!

No, what never ends is the saga of this movie, which came out in truncated form in 2017. If you’re not familiar with its history, Snyder did all the principal photography for the original film, but quit due to a family tragedy. Avengers director Joss Whedon took the reins, and — at the behest of WarnerMedia — tried to lighten the tone of Snyder’s gloomy opus.

The resultant tonal mish-mash pleased no one, so when the studios were largely idle during the pandemic, and Snyder fans were clamoring for his version of the movie, and the studio had a new streamer (HBO Max) to push, WarnerMedia threw Snyder 70M and told him to finish his version.

“I didn’t think this would ever happen,” Snyder told Esquire.

Neither did anyone else. But here we are.

Like in his Transformer movies, Snyder’s Justice League is chockablock with shiny characters.

All the polished metal does serve to offset the dark, muted colors (and tone) of ZSJL. But when Parademons swarm Cyborg, I honestly can’t tell who is whom.

Nothing Ever Ends Part II

So, about that epilogue.

In various interviews, Snyder has explained what it means — and what it was supposed to tease, which are the non-existent movies Justice League 2 and Justice League 3. Snyder didn’t plan on a trilogy (Man of Steel, Superman v Batman, Justice League); he wanted a pentalogy!

And we got a couple of hints as to what would be in those last two movies.

In Batman v Superman (2016), Ezra Miller’s Flash (who hadn’t been introduced yet) time travels to the Batcave and tells Ben Affleck’s Dark Knight that “Lois is the key!” Batman also has a “Knightmare” — that’s what everybody is calling it — where he’s on a blasted Earth battling Superman.

And midway through ZSJL, Ray Fisher’s Cyborg is given a vision by Superman’s ship of the Knightmare future that will be triggered by resurrecting Superman: Gal Gadot’s Wonder Woman and Jason Momoa’s Aquaman dead; Superman cradling Lois’ charred, dead body in the Batcave; Darkseid and an Anti-Life-Equation-controlled Man of Steel turning Earth into a wasteland.

All that would be in Justice League 2, per Snyder’s Vanity Fair interview:

“Darkseid comes to Earth. Superman says to Batman, ‘Guard Lois. This is a war between me and Darkseid. If you can help me as a friend, keep Lois safe.’ Lex (Luthor) tells Darkseid that the key to Superman’s weaknesses is killing Lois Lane. For whatever reason, Batman fails. Darkseid comes back and kills Lois. Batman fails, he hesitates. They were in an argument.”

As we see in the epilogue, the only resistance left on Earth after Batman’s failure is the Dark Knight himself, Mera (Amber Heard), Deathstroke (Joe Mangianello), Cyborg, Flash and, pointlessly, The Joker (Jared Leto). According to Snyder, all of them would die except for the Scarlet Speedster, who would travel back in time at the last instant, in order to warn Batman, who steps in front of a blast to save Lois Lane (Amy Adams).

Then in the last movie, we see an alternate timeline, where Lois doesn’t die and Superman doesn’t fall to the Anti-Life Equation. The Last Son of Krypton, Wonder Woman (leading the Amazons) and Aquaman (leading the Atlanteans) go toe to toe with Darkseid. The Super Friends prevail, and a pregnant Lois (we saw the positive pregnancy test in “ZSJL”) gives birth to … Batman’s son.

Yep. In the Snyderverse, Bruce and Lois were sleeping together while Superman was dead, and when Lois’ kid comes of age, he becomes the new Batman. For some reason.

Now, we’ll never see how Snyder was going to handle all of these revelations, but I’m pretty sure I don’t want to see them. I mean: Everybody dies at some point! How depressing! Also, Lois and Bruce? That not only comes out of left field, but yuch. We’re accustomed to Batman being super-competent, but the Snyderverse version played by Ben Affleck seems to be kind of a screw-up. He lets Robin get killed by The Joker, he attacks Superman for no good reason, he betrays Superman with an affair with Lois Lane and he even uses guns. (Courtesy HBO Max)

Plus, why would Batman NOT understand that his primary duty is to protect Lois? Not only did Flash warn him (“Lois is the key!”), but he even acknowledges his obligation when Wonder Woman says he’s done his job by bringing Lois to kick-start resurrected-but-brain-dead Superman’s memory (“No, I think it’s more than that.”). And he was in love with her. So … he “hesitates” when she’s in peril?

It’s Not Easy Being Green

Lastly in the epilogue, we meet the Martian Manhunter. Well, we meet him in his true shape for the first time, as he had appeared earlier in the movie pretending to be Martha Kent. In that scene “Martha” dumps some exposition on Lois, and evidently these two friends are never going to compare notes and realize that someone was impersonating Martha. Sure. And why is MM doing it anyway?

Incidentally, Martian Manhunter (Henry Lennix) had been around all through the trilogy, as Gen. Swanwick. But according to Snyder, the reveal in the epilogue was planned to feature another emerald-hued character.

“It was supposed to be one of the (Green) Lanterns,” Snyder told Esquire. “And then they [the studio] asked me, when they saw the movie and saw that I put it in there, they'd take it out. …

And the Green Lantern was John Stewart.”

If it’s not clear Snyder had to transpose J’onn J’onzz for John Stewart, per the studio’s request. But one of them was supposed to be there in the 2017 movie, which finally explains the advertising blitz, whose slogan was “Unite the Seven.” There were only six heroes in the first Justice League, but evidently Green Lantern — and later the Manhunter from Mars — was supposed to be the seventh.

It could have been eight. Did you wonder why you saw so much of nanotechnologist Ryan Choi? In the comics, he’s one of the characters who masters size-changing and goes by the name The Atom. 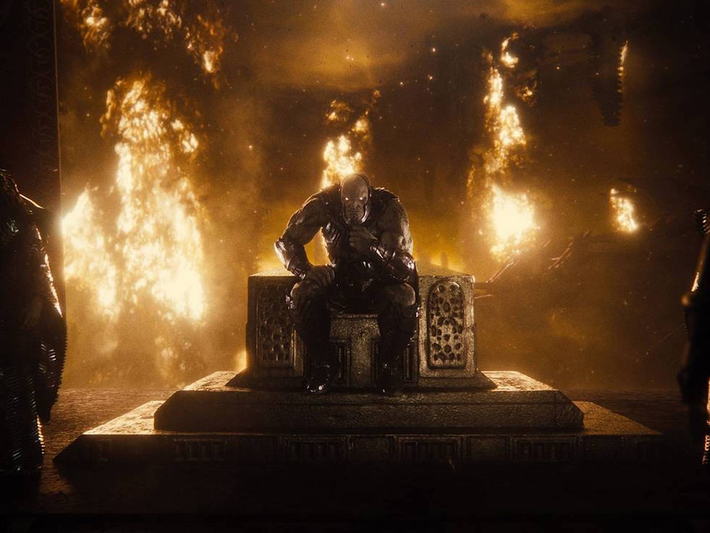 Darkseid (Ray Porter) is foiled in Zack Snyder’s Justice League, But he gets to win (briefly) if Snyder ever makes Justice League 2. (Courtesy HBO Max)

Nothing Ever Ends Part III

So, at long last, are we done with the Synderverse?

“I know that the studio doesn't really have any interest, clearly, in doing another movie with me,” Snyder told Esquire.

Snyder “has made peace with the notion that he may never get to venture any further into the Snyderverse,” wrote Vanity Fair’s Anthony Breznican.

So it’s done. But wait: There’s a black-and-white version of the movie which will be released soon. And then there’s this:

“It's entirely possible that a movie sequel will happen, especially if the global response to ‘Zack Snyder's Justice League’ is big enough to make WarnerMedia realize a follow-up would be a wise investment,” Snyder told ComicBookMovie.com.

Full Interview of the writer of Zack Snyder's Justice League

I'm vaguely curious about Jack Snyder's Justice League, but am I a bad guy for thinking I just don't want to spend four hours punishing myself? Is this one of those "Thank you -- you watched it so I didn't have to" kinds of movies?

Permalink Reply by Doctor Hmmm? on April 9, 2021 at 12:21pm
I'd watch it. I'm still on the fence about whether I think it's a good movie. But IMO it's a vastly more interesting and tonally cohesive movie than the "theatrically released" version (which I have no desire to ever see again). I definitely think it's worth watching at least once.

From what I have heard, I'm coming around to watching it Just have to find a four-hour block when there is nothing else calling to me.

The most surprising thing to me in this article was that there is an extended version of Batman v Superman that also restores scenes butchered from the theatrical release, scenes which sound like they improve that movie, also.