This week, most of the interesting movement is going on at Wildstorm. The imprint is debuting three titles -- Welcome to Tranquility, Kane & Lynch, and Gears of War – and taking a different approach with each of them. Kane & Lynch is a 6-issue miniseries based on a video game (important to note, since there was also a Lynch involved with Wildcats, right?), and it gets a single debut issue priced at $1.99. Gears of War, on the other hand, is also based on a video game – albeit one I’ve heard of – and it gets to debut with two issues, the first one offered as a free sample. (Wildstorm apparently published 13 issues, staring in 2008, with two later one-shots.)

Welcome to Tranquility, however, is a 2007 series written by Gail Simone that was just revived this month. The first issue is priced at 99 cents; next week, I guess, we’ll see if that’s the regular price. If so, a great deal!

Meanwhile, Wildstorm skipped a number of it’s regular titles. The Core Four are nowhere to be found this week, and Planetary is AWOL, too. On the other hand, we do get one-issue continuations of Ex Machina and Supernatural: Rising Son.

Zuda is going its first week without a debut, offering new chapters of The Hammer, High Moon, Street Code and The Night Owls, ending the long wait since issue 3. Now Azure takes the crown as most neglected Zuda title. (Next week won’t get any better for Azure, as the books released are Bayou, Night Owls, The Hammer and the debut of Blood Hunter. Hooray for advance notice!)

Vertigo seemingly just chugs along, with new issues of DMZ, Fables, Sandman and Y. C’mon, Vertigo – release an old miniseries or two, at least! How about Sebastian O? Or Flinch? 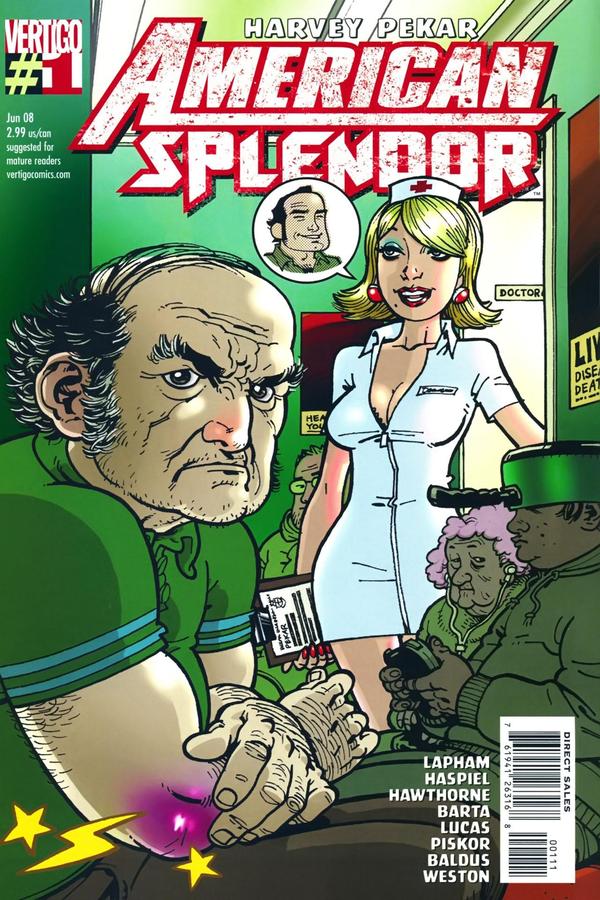 Oh, wait – what’s this I see? These American Slpendor issues were published by Vertigo, as well! There’s two issues of this particular 4-issue miniseries released here, and the first one’s free! Well played, Vertigo. You win this round.

The DCU offers a couple of surprises, though. Green Arrow, for example, gets a two-issue continuation instead of just one. (The Kevin Smith “Quiver” story, that is – the more recent first issue isn’t followed up on; it’s just a freebie you can follow up on in the stores).

Some interesting things are going on with Batman, as well. The Morrison reprinting continues, skipping over “The Resurrection of Ra’s Al Ghul” crossover to go right into Morrsion’s next issue, 672. But DC has also released issues 635 and 636, the first two issues of Judd Winick’s Red Hood storyline. It looks like the day of multiple Bat-stories is back!

All the rest of the issues are the usual suspects: Green Lantern, JLA, Jonah Hex (I must say, I think it’s fantastic that this non-superhero book’s made available here), Superman/Batman and All-Star Superman, which ends in one more issue. If I were DC, I’d have a Superman book starting up next week to give readers an immediate place to jump once All-Star’s done. The Johns/Frank Action Comics are a natural, but “Up, Up and Away” followed by Busiek’s “Camelot Falls” would be a fine way to go, as well.

The DC store has Superman/Batman as the banner, with American Splendor, Gears of War and Welcome to Tranquility as the buttons on the side. The books couldn’t be more different, but those titles could all work together as three chapter titles of an epic drama. Someone call Tony Kushner!

Comment by Cavaliere (moderator emeritus) on September 2, 2010 at 1:14pm
There aren't any new digital comics, DC or otherwise, for me this week. That's fine. There's plenty of books waiting at my LCS that "need" the money.

Comment by Rob Staeger (Grodd Mod) on September 2, 2010 at 1:18pm
As soon as I get time to read again, I'll probably be picking up The Night Owls. It really is right up my alley (and in design and subject matter, reminds me of a supernatural version of Ted Slampyak's Jazz Age Chronicles, an indy comic I really enjoyed years back. (Okay, decades back, now.)

Comment by Rob Staeger (Grodd Mod) on September 3, 2010 at 3:00pm
I didn't mention it in the column, but DC released a total of 25 issues this week. That's a drop from last week (35 issues, bouyed by the 7 issue StarCraft drop), but about par for the course.

One other thing -- StarCraft 2 was released last month. Kane & Lynch 2 was just released now, too. So Wildstorm is definitely using it's digital releases of videogame licensed titles as cross-promotion -- they sell the new game, and perhaps the new game sells the books.

Comment by Rob Staeger (Grodd Mod) on September 3, 2010 at 3:00pm
Oh, and whoops! I put the wrong American Splendor cover up there! But since I love Phillip Bond, I'm leaving it there!