Before we get to this week’s offerings, I should mention that DC provided readers with a few Halloween treats on October 31. There was issue 2 of The Long Halloween, issue 8 of Starman… and two more issues of Batman, issues 645 and 646. This run continues Judd Winick’s Batman stories with Doug Mahnke (for the most part), and continues through issue 650. (651 kicks off James Robinson’s One Year Later arc tying in with 52, after which is the beginning of the already-released Morrison run.) Three issues of Batman that interrupt Winick’s run have been skipped – two are parts of the War Crimes crossover, so that’s understandable.

The other is a Killer Croc one-parter by Anderson Gabrych and Mark Simpson. Unlike the crossover, releasing it doesn’t seem complicated. I wouldn’t be surprised to see it sooner or later, since so many comics people are completists at heart. (I noticed an issue of Wonder Woman had a note on it saying that the issue had never been collected in trade paperback. Maybe DC should come up with a graphic to signify that – there’ve got to be some trade readers that would be curious as to what they missed.

One other note: These Batman releases are the 50th and 51st releases of the Batman comic. (It’s up to if you count the annual.) Even though that’s still almost 30 issues behind The Walking Dead, it should be a cause for a small celebration – it’s 1/14th of a run extending back 70 years.

As for this week, a few things are coming into focus. Neither Vertigo nor Wildstorm had a debut this week, instead just continuing their current offerings: Fables, Sandman, Y and two issues of Hellblazer for Vertigo; Ex Machina, Gears of War, Planetary, Supernatural and two issues of Sleeper for Wildstorm. Supernatural released its final issue of the third miniseries this week, so unless Wildstorm releases the specials, it will have a slot to fill next week.

For the second week in a row, Zuda hasn’t released anything. I don’t think this is the end of these comics (well, some of them), but I definitely feel that last week wasn’t a glitch. The days of four Zuda titles a week are over, and we’ll see what the new normal brings.

The DCU, on the other hand, has a couple of debuts, including the first digital Flash comic, Flash: Rebirth #1. It’ll be good to set up Barry in the digital universe, but I wouldn’t expect DC to follow up with his new comic very quickly… it still hasn’t completed its first storyline. Tying in with Rebirth, perhaps, is the free secret origin of the Trickster and Pied Piper, from Countdown. 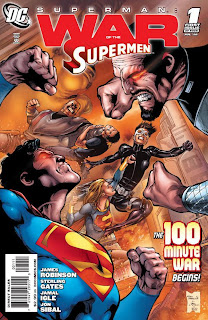 The other big DC debut is War of the Superman #1. DC had released the Free Comic Book Day zero issue as a free download a couple of months ago, but never followed through. This release, I think, adds a little credence to the thought that Superman’s current walk across America is motivated in part by post traumatic stress triggered by the end of this story. So it’s in DC’s best interest to get it into as many hands as possible.

DC also offers a 10-page preview of next week’s Thunder Agents. It looks intriguing, and it’s written by Jimmy Olsen’s Nick Spencer, so I’d be lying if I said I wasn’t interested. A few good reviews might get me to pick up the book.

DC also continues a bunch of its books. Three more issues of Batman (two of Winick’s, one of Morrison’s – the end of Batman R.I.P), and three more issues of Birds of Prey. JLA, Justice Society, Starman and Wonder Woman all get two issues. Batman: The Long Halloween, Green Arrow, Green Lantern, GL Corps: Recharge, Superman/Batman and Power Girl all get moved forward a notch, as well. I’m curious to see whether Power Girl is discontinued after the Palmitti/Gray/Conner run, or whether the digital releases will continue with Winick’s run. We’re not more than a couple months before Power Girl goes day-and-date, if so… and considering Winick is tying it in with Generation Lost, that might not be a bad move.

The DC store is hyping Flash: Rebirth this week, with Thunder Agents, Sleeper and Y: The Last Man as the buttons on the side.

Peter Wrexham replied to Steve W's discussion A Cover a Day
"The GCD agrees with you, Clark. And I'd just like to add that, though I've been sitting…"
45 minutes ago