Also new is that DC has opened its own virtual storefront at DCcomics.com. It’s Comixology powered, and the same comics are available via the standard Comixology site, but here I can see DC’s new releases without the other ones, which makes my life a little easier – and it means I won’t overlook a Wildstorm book I’d never heard of when it was on the stands. (Interestingly enough, when I log in and click on "My Comics" on the DC site, I don't see any; if I do it through the Comixology site, I see my purchases, all Boom! publications so far.)

Also in the DCU, it looks like DC's finally decided what it wants to do with Superman. We’ve got four issues of the triangle-flavored Superman books leading up to the Death of Superman. The order to read them is Superman: The Man of Steel 17, Superman 73, Adventures of Superman 496 and Action Comics 683. The Death of Superman kicked off a long run of really entertaining Superman comics, so assuming these get followed up with World Without a Superman and Reign of the Supermen, these books should continue for some time. Spoiler Alert: DC also releases the secret origin of Doomsday as its free origin this week. 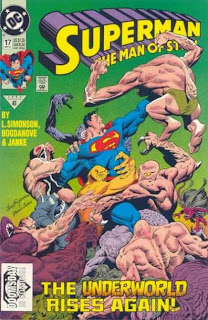 DC’s also releasing For Tomorrow, the Brian Azzarello/Jim Lee run on Superman, starting with Superman 204 and 205. It ran for a year.

The final DCU debut is Identity Crisis, which releases issues 2 and 3, and resents the price of the previously-free issue 1 to 99 cents.

Wildstorm and Vertigo are swinging for the fences this week, too. Wildstorm’s offering is The Authority, Volume 1, releasing 5 issues of Warren Ellis and Bryan Hitch’s groundbreaking series.

Meanwhile, Vertigo has released three of its best: Transmetropolitan, The Invisibles, and 100 Bullets, each one with a 99-cent introductory issue. Invisibles and 100 Bullets get 3 issues each, while Transmet leads off with 6.

After all that, let’s just run down the rest in alpha order, shall we?

Batman wraps up with Winick “Red Hood” run, with 649, 650 and Annual 25. Also, there’s issue 682, the first part of Morrison’s Final Crisis tie-in. The Long Halloween also gets a new issue.

That’s 64 issues. DC Digital’s biggest week since it’s debut. And with the new storefront, I think we can expect more weeks like this in the future.

The DC Store at Comixology emphasizes The Dark Knight, with The Authority, The Invisibles and For Tomorrow on the side.

Comment by Rob Staeger (Grodd Mod) on November 19, 2010 at 5:22pm
Just a note -- I'm running late with this week's column. Got a deadline crunch in anticipation of the Thanksgiving holiday. I hope to get it done tomorrow; we'll see.

Comment by Rob Staeger (Grodd Mod) on November 15, 2010 at 1:39pm
I think it's a combination of things. I'm sure popularity is a factor, but another factor might be how many issues they have of the whole thing on hand. If it's a smaller run, like Power Girl, one a week seems reasonable. At the same time, some long-term runs -- Morrison's Batman, Ex Machina, Fables, Sandman -- are also one a week.. but they're something that DC can count on as the backbone of the line. The youth of the line is another factor -- DC seems to want to build up a library right out of the gate, and then ratchets things back when there are more than a handful of issues available. (I expect Starman to pull back soon, though Birds of Prey is still going strong with two or three issues a week, so what do I know?)

Other, shorter runs in series where there's a lot of other material available -- Winick's Batman, for instance, or the Death of Superman -- get fast-tracked to make more of a splash.

These are just assumptions I've gotten from following their releases this closely. I could be wrong about any and all of them.

Comment by Travis Herrick (Modular Mod) on November 15, 2010 at 1:29pm
I'm sure there is some reasoning behind it, but I wonder what determines if a series gets more than one issue published in a week?

Jeff of Earth-J replied to Steve W's discussion A Cover a Day
"A mere 1000 issues? What a newcomer! As I pointed out on the "Three of a kind"…"
32 minutes ago