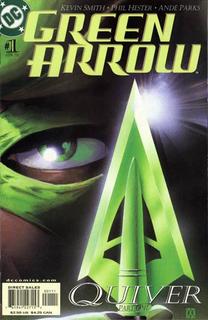 That’s the big news on the DCU side of things, as DC twangs off a double-shot of the Emerald Archer. The first part of the current “Brightest Day” storyline (Green Arrow Vol. 5) is available for free, and the first three parts of Kevin Smith’s “Quiver” storyline arrive, getting a free opening chapter (listed as Green Arrow, Vol. 3.) Ollie’s relationship with the popular Green Lantern makes him a logical expansion of DC’s ever-greener digital line, though when I’ve been thinking about what they’d release next, his series never crossed my mind.

I doubt they’ll be continuing the current GA series here – it’s probably serving as a free intro to the print editions – but I think releasing it free is much classier than charging for the first part of the Batwoman story and never following up on that.

Other than that, the DC U offerings chug along at a new issue each for All-Star Superman, Batman, Green Lantern, JLA, Jonah Hex, Justice League: Generation Lost, and Superman/Batman. The free two-page origin this week is Green Arrow, naturally.

All-Star Superman is coming to a close in 2 weeks. Any guesses on what Superman story will replace it? My money’s on the recent Johns/Frank collaborations like “Superman & the Legion,” but something like Superman: Secret Identity could be a nice treat, too.

Wildstorm also has a major debut this week: All 7 issues of StarCraft, another video-game based series. The first one’s free. (According to GCD, there’s actually one more issue, released separately in 2010). There’s progression on all the Core Four (though Wildcats #8 remains skipped from last week; I emailed them about the glitch but never heard a response), along with Ex Machina, Planetary, and licensed titles Supernatural: Rising Son and The X-Files, which concludes. Now that The X-Files is over, maybe they’ll finish up Victorian Undead? Me, I’m hoping for a visit to Astro City. 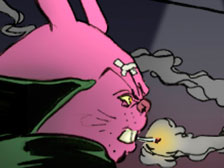 Zuda makes another free debut – The Hammer, a crime comic by Sam Little and Gabe Ostley that looks like Sin City starring a giant pink bunny – and continues Street Code, Safe Inside, and Bayou. According to the Zuda blog, not only is next week the first without a new title premiering, but also Night Owls will finally return. I’m gonna have to pick those up, I think.

The DC store has Green Arrow as its headlining banner, with buttons for StarCraft, The Hammer, and Y: The Last Man.

Comment by Cavaliere (moderator emeritus) on August 26, 2010 at 8:49pm
My only DC title this week will be Generation Lost. I am one of those who loved the "Quiver" storyline but I already own it. If you haven't read it, now's your chance.

There's a huge amount of non-DC stuff that was released this week including Savage Dragon, ShadowHawk, and Jack Staff. Titles I might try are Soul Kiss and Fell, both of which are Image titles.

Comment by Figserello on August 26, 2010 at 9:03pm
I'd imagine its the Kevin Smith connection that made them throw Green Arrow in there. Outreach and that. I think DC made a big mistake allowing Smith to write such a convoluted, continuity driven fanboyish story when his name might have attracted fresh readers.

In contrast, look at Ennis' restart of the Punisher, which covered similar urban vigilante ground. His resurrection gets a half-sentence "what was I thinking?" and then its into a great entertaining, accessible story.

Perhaps 'fresh readers' for something that was only on sale in specialist comic shops might have been utopian thinking on my part, but maybe there are potential fresh readers out there now with their i-donkeys. Green Arrow, despite Smith's name, isn't a good 'entry level' comic in my view.

And yeah, it's definitely Smith's name that is intended to pull readers in. Maybe DC is hoping he'll tweet about it and drive some readers, like Neil Gaiman did about Sandman?

Comment by Cavaliere (moderator emeritus) on August 30, 2010 at 1:20am
I'm glad that you liked Fell but I thought it was lousy. The actual mystery, what little there was of it, had an interesting conclusion but everything else was lousy. Honestly, if I'd noticed it was a Warren Ellis book then I wouldn't have bought it in the first place. I sure won't be buying any beyond the first.

Soul Kiss #1 was odd but interesting enough that I'll buy another issue. Generation Lost #8 was terrific.

Comment by Rob Staeger (Grodd Mod) on August 31, 2010 at 5:18pm
Sorry to steer you wrong, Cav. I haven't read them in years, but I remember mostly being impressed with the mood of the book, more than the mystery itself. My favorite issue was probably issue 5, which revolved around an interrogation scene (though nowhere as cool as "Three Men and Adena.")

Incidentally, I heard from Comixology -- they thanked me for pointing out the missing Wildcats * and fixed it.