Iron Man 3 brings us The Mandarin, once the Armored Avenger’s greatest foe in the comics. But The Mandarin on the screen is considerably different than his comic-book counterpart, which I think even most comics fans will agree is a good thing. The Mandarin first appeared in 1964, a mysterious figure in the mountains of China who was feared even by the Chinese government. Iron Man was dispatched by the U.S. military to gather information on this threat, because in those days anti-Communism was a major part of the strip, and Iron Man was very much a Cold Warrior. The Mandarin, it turned out, had 10 rings, each with a different super-power (which seemed to change with plot necessities), that were later explained to have come from a crashed alien spaceship. He could also, implausibly, shatter steel (and occasionally Iron Man’s armor) with karate chops!

A charitable reading of this character is that co-creators Stan Lee and Don Heck were going for a contrast with Tony Stark. You know, East vs. West, Asian martial arts vs. American technology, Tony Stark’s thin David Niven mustache vs. The Mandarin’s long Charlie Chan-style face fuzz.

Less charitably, The Mandarin’s roots are planted deep in ugly American bigotry, nativism and xenophobia. He was, in 1964, simply the latest iteration of a phenomenon known as “The Yellow Peril,” a Western hysteria with a long pop culture history snaking back through comics and pulp fiction to novels and stories of the 19th century.

TheYellow Peril more or less began in the late 1800s, with an influx of Chinese, Korean and Japanese immigrants on the West Coast. In those days, of course, the superiority of the white man was a given in Western culture, and racism against non-whites was common and casual. But the fear of “yellow” people had some unique aspects: The huge populations of China and Japan gave rise to worries about Asians overwhelming Western powers by sheer numbers; the men were often depicted as sexual deviants, while the women were irresistible sirens; and the mysterious East was depicted as full of strange gods and decadent drugs that would undermine the West’s Christian morality. This wasn’t fringe-y stuff. The U.S. Congress passed a number of laws from the late 1800s through the 1920s to limit or hobble Asian immigration, such as the “Chinese Exclusion Act” of 1882. Jack London – yes, “Call of the Wild” Jack London – wrote “The Unparalleled Invasion” in 1914, a science fiction story set in 1976 where the West wipes out the entire population of China with biological warfare (anthrax, Black Plague, etc.), and that is considered a triumph. Buck Rogers began in 1928 as a strip about resistance to America’s cruel Chinese overlords in the year 2419. Other big names, ranging from Robert Heinlein to H.P. Lovecraft, spun horror stories about Asian cultures conquering the world. British writer M.P. Shiel began a series of novels in 1898 that was actually titled “The Yellow Peril.”

This sort of thing probably hit its high point with Sax Rohmer’s Fu Manchu stories, a series that began in 1913 and produced not only novels but a host of movies. Fu Manchu, the “devil doctor,” was the epitome of Western fears. He was brilliant, fusing science, sorcery and bizarre medicine. He was physically unsettling, having “feline grace” but the “face of Satan” – and a mustache that will forever bear his name. He had an army of ninja-like assassins called Si-Fan who would throw their lives away heedless for their master, for whom human life meant nothing. Only the relentless efforts of the British secret service kept the insidious Eastern menace for completing his awful, complicated schemes!

Fu Manchu, with his sibilant speech, eponymous mustache and long fingernails, is so well-known that he is essentially the model for all subsequent “Yellow Peril” characters. And there have been many in various media, including Flash Gordon’s Ming the Merciless, Jonny Quest’s Dr. Zin and James Bond’s Dr. No. A running gag in “Get Smart” was that the villain named “The Claw” had such a thick Chinese accent that everyone thought his name was “The Craw.” 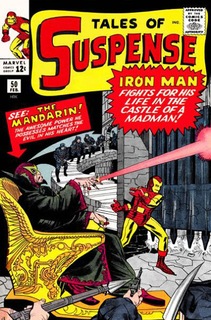 But nowhere are Fu Manchu wannabes as thick on the ground as they are in comics. They include Sen Yoi, who appeared on the cover of DC’s “Detective Comics” #1 in 1937, a magazine which gave us the actual Fu Manchu in issue #17 (and where Batman debuted in issue #27). Another “The Claw” – who could grow to gigantic height and shoot lightning from his hands – debuted in Lev Gleason’s “Silver Streak” comics, and became the arch-nemesis of the original Daredevil, who predated the one at Marvel Comics. Speaking of Marvel, that publisher introduced the Yellow Claw in the 1950s, but also – perhaps indicating changing times – heroic Asian-American FBI agent Jimmy Woo. Marvel also established the original Fu Manchu as the father of superhero Shang-Chi, Master of Kung Fu, until they lost the Sax Rohmer license, and now Shang-Chi’s father is simply “The Doctor.”

And Marvel gave us The Mandarin. A Chinese mastermind with long fingernails and longer mustache, he was just another Fu Manchu clone for years. Marvel has tried updating him now and again to excise the racism element (and make him more relevant), but since that’s the core of the character, it never really works.

But the makers of Iron Man 3 came up with a unique solution to this dilemma. Will it work? I don’t know, but for my money The Mandarin should be retired.

Because Fu Manchu called, and he wants his mustache back.

Contact Captain Comics at capncomics@aol.com. For more on Iron Man 3, GO TO THIS THREAD.

One of the pieces of furniture that my wife got from her parents when we moved to our Australian house was a rough-hewn, but sturdy single bed that was made maybe 100 years ago or so.  It has a frame to hang a mosquitos net from, which is an indicator of its age.

There is a stencil underneath that says "made by Australian labour".  That sounds inoccuous enough, but what it really means in its context, is that it was made in a factory that didn't employ low-paid Chinese workers.

I love history and love having the bed as it so clearly speaks to a certain point in the Australian story (and Australia's proud tradition of Labour solidarity.)

Still, I have mixed feelings about what it so proudly proclaims.  On the one hand, it advertises that it was made in a factory where the Unions dictated that everyone working there should get a fair wage, but on the other hand, it is somewhat making the fear of the "Yellow Peril" a selling point.

But that's history for you.

Are we allowed to say that it all looks blood-thirsty, narrow-minded and racist from our present perspective?

Even looking at it from the perspective of people of the time, I suspect a Chinese-American of the pre-Great War era wouldn't find the depiction of his ethnic group as reasonable and excusable as you do.  Does his or her opinion count for less than that of frightened white people of that time?

And thank God that kind of bigotry and war-mongering attitude are a thing of the past, eh?  And that there is nothing we have to learn from the mistakes of yore.  Getting it all so right these days.

I am not familiar with the Jack London story to which you refer, but I have read his "Call of the Wild," "White Fang" and "The Sea-Wolf." Fine books.

Regarding London's science-fiction story in which China was wiped out, well, back in 1910, countries fought wars to win territory and they fought for keeps. The U.S. fought an imperialist war just  a few years earlier with Spain.

The enemy  was the enemy. Terrible chemical weapons hit the battlefields of World War I just a few years later. Nearly 1 million men died in the Battle of Verdun.

Later in World Wari II, the United States resorted to tactics that resulted in horrific civilian casualties to end the Japanese campaign: The fire-bombing of Tokyo and other big cities and the atomic bombs dropped on Hiroshima and Nagasaki. The Allied bombing campaign also did a crack-up job of depopulating Germany. Obviously, what the Germans and Japanese did to the civilian populations that fell under their control was mind-boggling.

Reality wasn't all that different from fiction.

Will say again that stories written in different times ought to be read taking into account that attitudes were not the same then as they are now. They also can be a telling window into the past. Now I will step off the soapbox.

I read a couple of them, and of course I read the entire run of Master of Kung Fu. You make valid points. But I do have to criticize novels -- and a mindset -- that think it's just super to commit genocide on China with biological weapons.

It's funny how things worked out, though, that the West was so terrified of a Sino-Japanese alliance. I mean, given the invasion of Manchuria in '32, the Rape of Nanking, the horrific Japanese occupation, etc.

I read all of Sax Rohmer's Fu Manchu books back in the late '60s-early '70s when they were reissued in paperback.

If you take into context the time in which the stories were set, when there was great fear worldwide over rising militarism in Japan (which proved well-founded) and coming a couple decades after the Boxer Rebellion in China, a fictional Asian super-menace was perfectly understandable.

I believe you have to take fiction for what was going on at the time it is written rather than retroactively criticize it for being politically incorrect.

They've already used Obadiah Stane as the villain in the first movie, and used the Crimson Dynamo/Whiplash for the second.  Assuming they don't want to repeat themselves, the Mandarin is an obvious choice over Justin Hammer or the likes of the Titanium Man.

...I thought for a long time that Ra'sA Guhl was meant to be " an Oriental " in thatsense , Chinese - But I don't have my earlier issus anymore

Although the name "Ra's al-Ghul" is said to be Arabic for "The Head of the Demon," the character does have roots in China. See here: "Ra's al Ghul"

Iron Man 2 had a character with the name "Justin Hammer," but he wasn't anything like the character in the Iron Man comics.

Philip Portelli replied to Steve W's discussion A Cover a Day
""Not only that but your feet stink! Wear some socks next time!""
19 minutes ago

Jeff of Earth-J replied to Jeff of Earth-J's discussion Tales to Astonish
"THE INCREDIBLE HULK #102 - "Big Premiere Issue!" The conclusion of this story takes me…"
55 minutes ago