June 22,2010 -- Trickster (Fulcrum Books, $22.95) is one of those brilliant ideas that in retrospect is so obvious, people slap their foreheads and say “Why didn’t I think of that?” 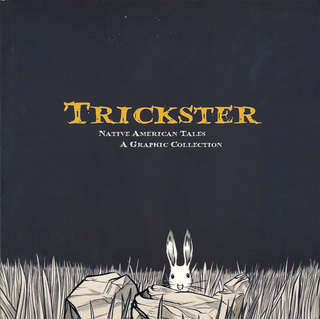 Trickster editor Matt Dembicki rounded up Native American writers from across the United States, and paired them with a variety of artists (including himself) to relate tales of various Native American trickster gods. The result is more than 20 tales of pure, undiluted magic.

Trickster god stories are as varied as the tribes that told them as instruction, jokes, morality tales and more. Some trickster gods take on a specific form, others shapeshift into ravens, rabbits, foxes, coyotes, etc. The variety is just amazing, and no two tales are alike.

For example, in “Azban and the Crayfish,” a clever trickster takes the form of a raccoon, plays dead, and allows a crayfish to take credit for “killing” him. That just brings the crayfish close enough to eat, and a lesson is learned about bragging. But in “Mai and the Cliff-Dwelling Birds,” the trickster coyote is none too bright, and repeatedly injures himself trying to be a bird. Here the lesson is the futility of trying to be something you’re not.

Some tricksters can be helpful, as in “The Bear That Stole the Chinook,” in which Coyote rescues the wind from Bear after Owl and Weasel fail. Some are selfish troublemakers, like the egotistical trickster who ruins the order of the stars in “Coyote and the Pebbles.”

But whatever form the trickster takes, and whatever his scheme, it generally results in chaos or trouble for someone – sometimes the trickster himself.

I should note that trickster gods are not unheard of in comics. For example, Loki, the Norse god of mischief, has been a constant in Marvel’s Thor comics since the early 1960s. Steve Englehart’s Coyote was an influential book in the 1980s at Eclipse and Epic, with art by Marshall Rogers, Steve Leialoha and others. (It’s available in five trade paperbacks from Image now.) Anansi, the Spider God of West Africa and the Caribbean, has been hero, villain and supporting character in a variety of comics.

Which just goes to show that trickster gods and comics were made for each other. For proof, look no further than Trickster. 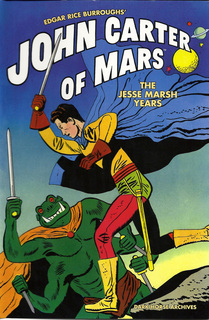 First, I didn’t know that John Carter joined fellow ERB creation Tarzan at Dell. He did for the three issues of Dell’s Four Color reprinted here, but apparently didn’t prove popular enough to leap into his own series like the Ape-Man did.

Second, this book made me appreciate the Marvel Comics version of John Carter all the more, by Marv Wolfman and Gil Kane, which appeared in the late ‘70s. This version by Marsh and writer Paul S. Newman isn’t bad, but it is literally bloodless and somehow static. Swashbuckling should be more fun than this looks.

And third, I’m beginning to see Marsh’s influence on later artists. Some of the blocking and body posture in Carter I’ve seen in Gilbert Hernandez’s work in Love and Rockets. (For the record, brother Mario writes an introduction here.) And here and there I see expressions and rendering that I could swear have been adopted by the likes of Pat Boyette (Peacemaker) and Dan Spiegle (Blackhawk). 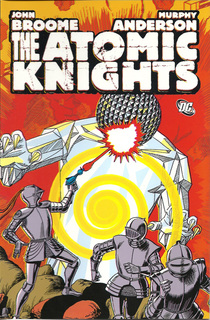 It’s one of the earliest examples of post-nuclear-holocaust comics extant, but in the hands of veterans John Broome and Murphy Anderson, it has a unique (and silly) twist: The last heroes wear ancient suits of armor that somehow, implausibly, ridiculously, ludicrously make them immune to radiation. So they become guardians of the wasteland, gadding about like Grail knights on mutant, horse-size Dalmatians.

Yes, it’s silly. And you have to overlook how the one girl knight is usually left at home. And they were waaaay too earnest about the nonsense around them.

But the leader’s name is “Grayle,” they ride giant dogs, they fight food-hoarding Fascists and they’re ancient knights in the future. So silly or not, it’s just plain fun.
Contact Andrew A. Smith of the Memphis Commercial Appeal at capncomics@aol.com.

Comment by Cavaliere (moderator emeritus) on June 25, 2010 at 2:41am
Trickster sounds terrific, Cap. I especially enjoy tales of Raven. My library system has two copies, both of which are already checked out. I'm not #7 in the reservation line.

Comment by Jeff of Earth-J on June 28, 2010 at 11:51am
I gave the Jesse Marsh John carter a pass because it was solicited as a softcover; otherwise it would have made a nice companion to my Jesse Marsh Tarzan hardcovers. Then, much to my surprise, it shipped as a hardcover at the same price the tpb was solicited! I can't recall that ever happening before! I'll probably buy it someday, but not someday soon. right now I'm in the middle of volume one of Lee Falk's The Phantom (in case you're wondering).

The Atomic Knights is one of what I call a "drop everything" collection; IOW, when something like this ships I drop everything else I'm in the middle of reading and move it to the top of my list. You're absolutely right: it's unique and silly and just plain fun.

Comment by Captain Comics on June 28, 2010 at 4:17pm
One thing I didn't have room for -- and probably wouldn't have interested a general audience -- is something I always wondered about: Why where there so few "Atomic Knights" stories? I never owned a single one, and still don't, so I didn't have a clue.

Now I know. According to the foreword, "Atomic Knights" rotated with two other features, "Space Museum" and something else. I don't know why this was so (was "Space Museum" really that popular?), but at a guess I'd bet money it was to allow the busy and meticulous Anderson time to do it. Accommodating artists wasn't typical in those days, but Julius Schwartz wasn't a typical editor. Anyway, "Atomic Knights" only appeared in every third issue of Strange Adventures from #117-160, so that's why there were only 15 of 'em.

And I hadn't really thought about why "Atomic Knights" ended; the answer to that question is usually "sales" so it's not usually a mystery. But now I find that "Knights" ended because Schwartz moved over to the Bat-titles as editor in 1964, and "Strange Adventures" was handed to another editor. I don't remember who it was -- Bill Kashdan? Murray Boltinoff? -- but whoever it was, he changed it to a supernatural-mystery anthology, and all the SF series were booted.

Presumably the new editor would not have been allowed to do so if Strange Adventures was selling boffo. But it does make me wonder just how popular "Atomic Knights" was. It could have been a pretty decent seller, or a pretty crappy one, but we'll just never know. It appears to have been memorable, though, because all the fans a few years older than me remembered it fondly.

Comment by Jeff of Earth-J on June 29, 2010 at 9:12am
Prior to reading this collection, my entire experience with the Atomic Knights was a house ad for Who’s who in the DC Universe. I consulted that and learned that the entire experience was eventually “retconned” in DC Comics Presents #57 into a dream of Gardner Grayle’s while he was undergoing an experiment at S.T.A.R. Labs. That story would have been completely different in direction and tone from the others, still the volume is so thin that DC would have had plenty of room to include it an cap off the seires.

The Atomic Knights feature was later folded in with Hercules Unbound and Kamandi. A DC Showcase Presents volume of “Tales of the Great Disaster” (or some such) was solicited at one time, but taken off the schedule before it was published. My hope is that the publication of Atomic Knights in a color hardcover means that a similar collection of Hercules Unbound might be in our future. The early issues feature the art of Jose Luis Garcia-Lopez inked by Wally Wood (I’ve heard the result looks like Wood) and later issues feature early work by Walt Simonson. I’ve read the last two issues of the series reprinted in a Walt Simonson tpb, but I’d like to read the entire series not on;y to “ooh” and “ahh” over the art, but also to compare to Marvel’s Hercules.

Comment by Cavaliere (moderator emeritus) on September 1, 2010 at 2:04am
Trickster was a very good book. Well, mostly good. Like any anthology, some stories are better than others. I'm glad I read it, though. Thanks for recommending it, Cap.