June 15, 2010 -- It’s weirdly appropriate that Neil Young’s Greendale (DC/Vertigo, $19.99) has arrived as gallons of crude oil wash up on the white sand beaches of the Gulf coast. 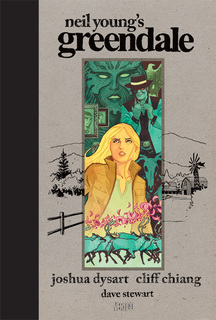 Because one theme of Greendale is environmentalism. Another is natural synchronicity – of people, events and the huge wheel of fate. Whoa!

Anyway, Greendale is also a heartwarming coming-of-age story, a chilling contest with evil and a wondrous tale of “witchery.” At least, that’s what Greendale is in its graphic novel form. I can’t speak to what aspects are revealed of this strange little California town in its previous incarnations as 1) a concept album, 2) a rock opera and 3) an indie movie – none of which I have seen or heard.

And that turns out to be OK. In the hands of writer Joshua Dysart (Unknown Soldier) and artist Cliff Chiang (Green Arrow & Black Canary) Greendale the graphic novel is completely satisfying as its own, singular animal.

It’s the story of Sun Green – actually, of her entire family, but especially the Green women, most of whom disappear under odd circumstance, but all of whom have a preternatural connection to nature (abilities some townsfolk describe as “witchery”). As 17-year-old Sun discovers her powers (and all the other wonders and distractions of being an attractive teenage girl), we also meet various members of her extended family – some of whom arrive only in dreams and hallucinations. We also meet The Stranger in Red, a character only the Green women can see, a “taker” (as described by Sun’s great-grandmother) who is reminiscent, in a goose-pimply way, of The Walking Man in Stephen King’s The Stand.

Sun does some things we don’t expect, but often her actions are as natural and comforting as a summer rain. My wife’s reaction after reading Greendale was to re-experience that rain – to reminisce about her own younger years, when she too felt like a Green woman, “born with flames in our hands and bottled love in our hips.” But, oddly, I felt an empathy with Sun as well, despite being male. Perhaps that’s the magic of adolescence, regardless of gender, or maybe just a tug from our roots – a reminder that we’re all part of the natural world.

So I enjoyed Greendale immensely, just as scenes from the Gulf reminded me how prescient it is. Maybe that’s synchronicity, maybe that’s coincidence. Or maybe it’s witchery. 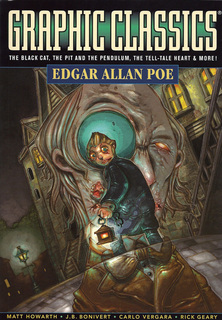 * The most popular edition in Eureka Productions’ “Graphic Classics” series is volume one, featuring stories by Edgar Allan Poe, as interpreted by a variety of top-drawer artists. Now comes the greatly revised fourth edition ($12.95).

This version is still highly recommended, if for no other reason than the immensely talented Rick Geary’s rendition of “The Tell-Tale Heart.” New in this edition are “The Pit and the Pendulum” (which I find more terrifying with art than I did in Poe’s original prose), “William Wilson,” “Annabel Lee” and “The Black Cat.” These old favorites are welcome, despite displacing “King Pest,” “Hop Frog” and “The Masque of the Red Death,” found in the third edition. Only the last do I lament, and by eerie coincidence, an excellent adaptation of that tale has just been reprinted in Eerie Archives Vol. 3 (Dark Horse, $49.99). So no blood, no foul.

Included in both editions are “The Raven,” “The Fall of the House of Usher,” “A Cask of Amontillado” and others. For the love of God, Montressor, pick up a copy at www.graphicclassics.com! 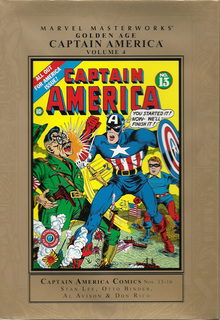 But you can see that Avison was doing his darnedest to ape Simon & Kirby’s kinetic approach, with wild anatomical impossibilities, broken panel borders and in-your-face fistfights. And while the stories are fairly pedestrian, they do take place immediately after Pearl Harbor, and American anger at the Japanese fairly leaps off the page.

That raw – and unfortunately racist – reaction gives these stories a sort of boorish charm. Especially when The Red Skull has a rising sun on his chest for half a story, then a swastika for the other half!

Comment by Jeff of Earth-J on June 18, 2010 at 9:48am
I went throgh a Captain America phase earlier this year and read CA Golden Age Masterworks Vol. 1-3 as well as the Silver Age volumes reprinting #100-124 so I was well-prepared to jump right into this volume as well as the Silver Age volume reprinting #125-136 which shipped just this week! I'll no doubt have more to say about that after I've had a chance to re-read the stories within (and more than I have to say about this volume at all).

I won't disagree with your assessment of Al Avison and Syd Shores as a "lesser art team" than Simon and Kirby, but I will quibble with it. In his two-volume History of comics, Jim Steranko opined that, after S&K left Timely, other artists aped their work for years to come. I'm not goin to disagree with that, either, but you know what? I see it as less of a "Simon and Kirby" thing than it is a "Captain America" thing. On no other feature immediately preceeding or following dis S&K experiment with bold panal layouts to the extent they did on Captain America. Also, I have never been as big of a fan of Simon and Kirby together than I am of Kirby solo, and personally, I actually prefer the art of Avison and Shores to that of Simon and Kirby.

There. I said it.