With the relevation of the New Ultimate Spider-Man being half-Latino, half African American, several of us (myself included) observed the lack of original minority/non-White heroes. I'm focusing on Marvel now but DC is equally lax on it. There are notable examples of black characters taking the names/personas of established white heroes: Iron Man, Captain Marvel, Goliath/Giant-Man, even Ultimate Nick Fury. To be fair, Marvel created all-new minority non-White heroes in their Silver Age but there were always problems.

The Black Panther is a real African king from the super sci-fi nation of Wakanda so it was difficult for readers to identify with him. He was a guest star for his first years, joining the Avengers. Then the term "Black Panther" took on a whole new meaning with the rise of the militant group, thus robbing him of a marketable, "safe" name. He was addressed as The Panther, the Black Leopard and his true name, T'Challa but this denied him any solo series until the regretably named Jungle Action. There have been many attempts to make the Black Panther a star; five different series, numerous minis, married to the X-Men's Storm and lately being treated as a major player in the MU. It may work yet though his lack of real powers and a dull costume are definite disadvantages.

The Falcon was always featured prominently but always as the second part of Captain America And... This sidekick label never left him and then there is his convoluted origin and constant attempts of upgrading him. Powers, no powers and the same falcon, Redwing, for over forty years! Maybe he has the super-powers!

But Marvel's best bet for a non-White superstar was: 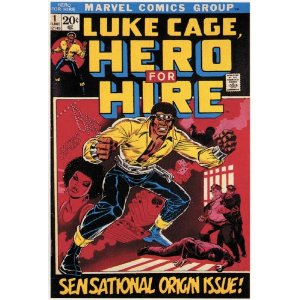 Created by Roy Thomas, John Romita and Archie Goodwin, Luke Cage debuted in Hero For Hire #1 (Ju'72). His origin was definitely from the headlines. He was a black prisoner, wrongly convicted, mistreated by racist guards, who undergoes an experimental process to gain parole. But one of those guards tried to kill him but the overloaded treatment gives him "steel-hard skin and muscles to match!" He quickly escapes and starts a new life as a super-hero that the public can employ.

Luke had a hard life which he does not sugarcoat. He has committed crimes and done acts of violence but he was trying to better himself when he got framed. He is wary of the law and authority and rightfully so. But he wants to be a force of good, he just wants to be paid for it. This does has some precedence in the Marvel books. Both the Fantastic Four and the Avengers get stipends and the public believes that Iron Man works for Tony Stark.

Many complain about his outfit but it is appropiate. The metal handband shows his strength and nobility. The much-mocked yellow shirt works with his dark skin and makes him stand out. He does not hide in the shadows. He is in your face and proud. The chain belt reminds him of his wrongful imprisonment and gives him resolve to aid the helpless. He looks like a hero, an individual and a warrior.

Also worth mentioning is that not all whites are bad and not all blacks are good. Cage fought black foes (Diamondback, Black Mariah, Senor Muerte, Chemistro, Shades and Comanche) and white foes (Mace, the Christmas Bomber, Stilletto, not to mention Doctor Doom). The latter smacked in the middle of the Marvel Universe. The Doom issues of Hero For Hire #8-9 also have him meeting the Fantastic Four, which would pay dividends in the future. HFH #12 refer to Amazing Spider-Man #124 where he was hired by Jolly J. Jonah Jameson to capture the Wall-Crawler.

But in what would have been HFH #17, the big change comes as the title becomes Power Man, a strong and memorable name. He also battles Iron Man and holds his own.

Power Man had all the potential to be a super-star. Compelling origin, real powers, an interesting supporting cast but sales were never strong. He may have been Shaft Among the Super-Heroes but he never really fitted in. Too strong for urban crime and too urban for super-hero fare. He was even part of the Fantastic Four for three issues, replacing the Thing briefly. He was paired with fellow fad hero Iron Fist and for a time, Power Man & Iron Fist was one of Marvel's best comics.

Luke had several problems for success. His strength was seemingly purposely left vague. He battled Spidey, Iron Man and the Thing but no one knew how strong he really was. He was part of the Defenders for a time but was never asked to be an Avenger even though he had his own title. Simply put, he was never treated like a headliner. Flavor but not the main course!

He could have been a contender. He really could have!

I have absolutely no problem with Luke progressing as a character, from his angry-young-man days to mature father, protector and leader. That's a genuine character, not a representative of an entire ethnicity. and one I'd rather read about.

My only complaint about the current Luke is the drab street clothes. I don't necessarily want him in costume, nor do I want him to suddenly start struttin' in Day-Glo colors. But I would like him to be more distinctive in crowd shots. Comics are a visual medium, and he needs to be more visually arresting -- aside from being the only black face in a sea of white ones (and green and orange). A simple logo on his chest would do it, or a red T-shirt instead of a black one. Something, anything to draw the eye.

Comment by Travis Herrick (Modular Mod) on August 11, 2011 at 10:37am
I read that blog post Figs, linked to as well, and my hat is off to that dude. As someone who has only counted how many Thor comics come out in one month...It would have to be a beating of the highest order to count all of the words, panels, etc. in a comic book and break down the stats on it. If my boss asked me to do that,  I would tell him to blow it out of his ***..

With every Marvel Previews I see, Luke is always part of something, either the Avengers or the Thunderbolts. While that keeps him in the public eye, it also has him at the same "star" level as Mockingbird or Boomerang!

What he needs is a new Luke Cage #1 or better yet a new Power Man #1, which he never had!